I want to believe: the UFO truther voting bloc is real — and Klobuchar is trying to woo them 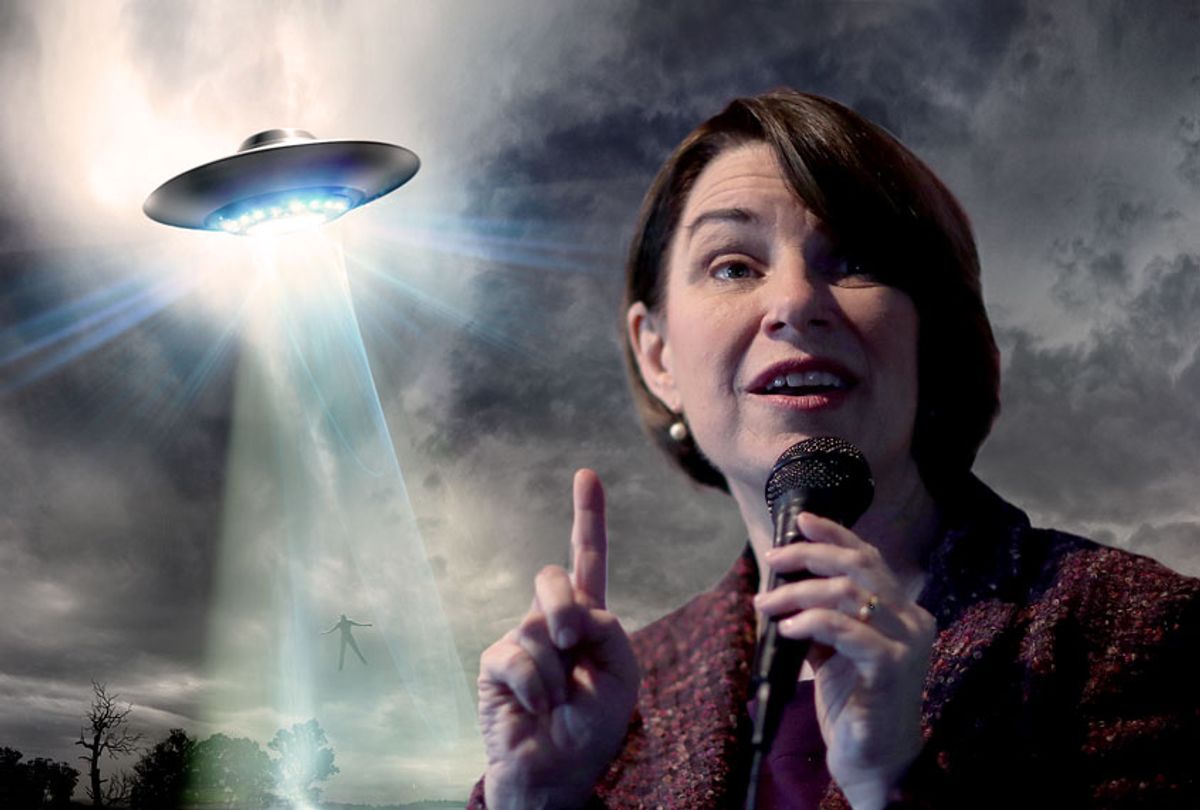 Presidential candidates run all kinds of strategies to connect with different voting blocs. And we know from previous elections that UFO truthers are a real voting bloc, one that Hillary Clinton and Bill Clinton both famously courted. Now, Democratic candidate and Minnesota senator Amy Klobuchar is positioning herself as the obvious choice for people who think the truth is still out there.

In an interview this week with the Conway Daily Sun, a local New Hampshire newspaper, Klobuchar hinted that she would be open to revealing government secrets concerning UFOs if elected president.

In October, the paper asked Klobuchar if she was familiar with a New Hampshire man named David Fravor, who was made famous for his account of chasing a UFO off the West Coast as a U.S. Navy fighter pilot in 2004. Klobuchar told the Daily Sun she would look into it. On Monday, she confirmed she did.

“I think we don’t know enough ... I don’t know what’s happened, not just with that sighting, but with others,” she said, referring to Fravor. “And I think one of the things a president could do is to look into what’s there in terms of what does the science say; what does our military say."

She added: “Here’s the interesting part of that answer is that some of this stuff is really old ... So, why can’t you see if you can let some of that out for the public so earnest journalists like you who are trying to get the bottom of the truth would be able to see it?”

She isn’t the only democratic candidate to talk candidly about UFOs. In August, Vermont Senator Bernie Sanders said on Joe Rogan’s podcast he would disclose documents related to UFOs if he could. In July, Andrew Yang told CBS News that he would declassify Area 51 info if possible.

In 2016, Hillary Clinton spoke seriously about UFOs while running for president. Similarly, in an interview with the Conway Daily Sun, Clinton told a reporter she was “going to get to the bottom of it.” In 2016, Jimmy Kimmel asked Clinton about UFOs during an appearance on his late night talk show. Clinton, well-acquainted with contemporary UFO terminology, quickly corrected Kimmel.

UFO conspiracy theories were once consigned to shadowy message boards and checkout stand tabloids, but recent reports in papers as esteemed as the New York Times have brought the UFO question into the mainstream. Former Blink-182 guitarist Tom DeLonge co-founded UFO research organization To the Stars Academy of Arts & Science, which, in 2017, released footage of unidentified flying objects observed by U.S. military, which was reported on by the Times.

More recently, in an interview with Motherboard, Joseph Gradisher, a spokesperson for the deputy chief of Naval Operations for Information Warfare,  confirmed that the flying objects in those videos were of unknown origin. “The Navy considers the phenomena contained/depicted in [the] 3 videos [that DeLonge made public] as unidentified," Gradisher said.

“The information obtained from each individual report of any suspected training range incursion will be investigated in its own right. The information obtained in these reports will be catalogued and analyzed for the purpose of identifying any hazard to our aviators,” Gradisher said. “Any report generated as a result of these investigations will, by necessity, include classified information on military operations. Therefore, no release of information to the general public is expected.”

Perhaps that will change with the next president.