Australians have lost homes, land, and loved ones. And a lot of them are furious with their government. 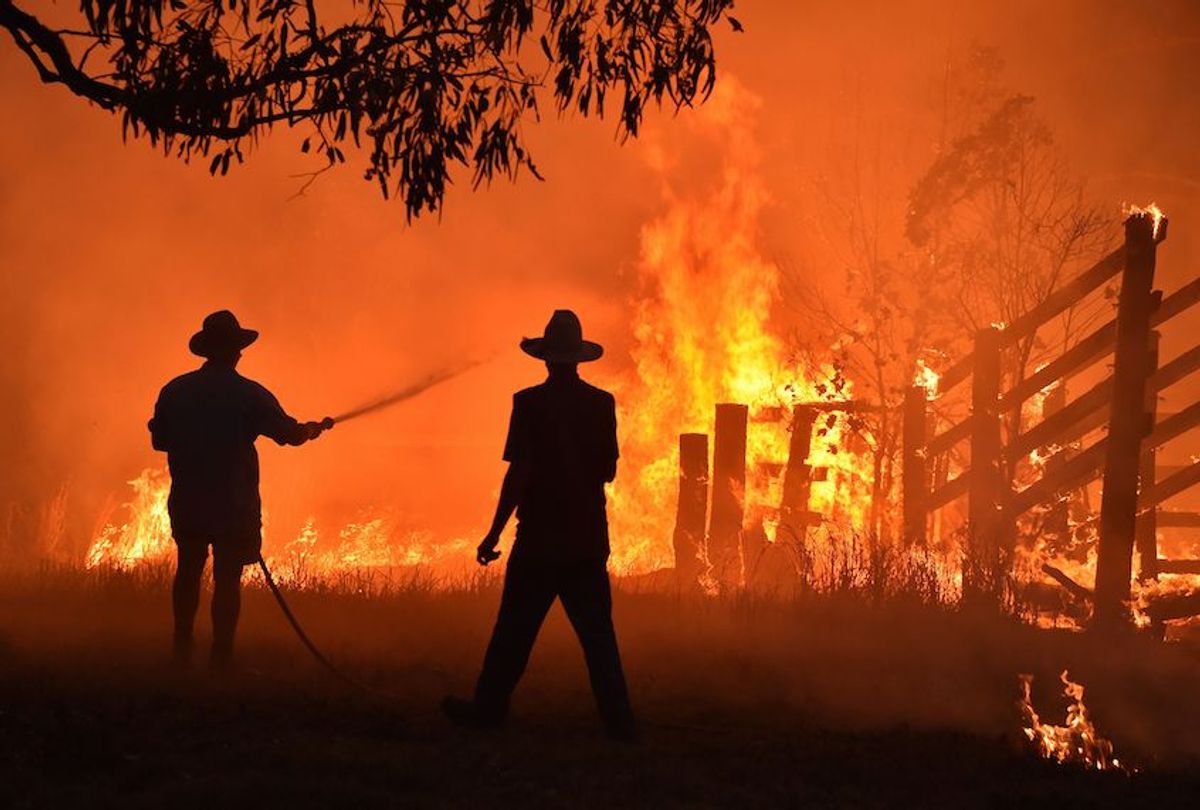 Residents defend a property from a bushfire at Hillsville near Taree, 350km north of Sydney on November 12, 2019. - A state of emergency was declared on November 11 and residents in the Sydney area were warned of "catastrophic" fire danger as Australia prepared for a fresh wave of deadly bushfires that have ravaged the drought-stricken east of the country. (Photo by PETER PARKS / AFP) (Photo by PETER PARKS/AFP via Getty Images) (Peter Parks/AFP via Getty Images)
--

The Land Down Under has been on fire for weeks. At least 17 people have been killed by wildfires in Australia this season to date. On Thursday, New South Wales declared a state of emergency — the third emergency prompted by uncontrollable wildfires since November. Australians have lost homes, land, and loved ones. And a lot of them are furious with their government.

While his country battled dozens of simultaneous infernos in late December, Australian Prime Minister Scott Morrison was vacationing with his family in Hawaii. When he realized that his absence wasn’t going over well with his constituents, Morrison returned and tried to stage a photo op in wildfire-ravaged Cobargo, a tiny town between Sydney and Melbourne with a population under 1,000. As you can see, hell hath no fury like an Aussie scorned in the middle of a climate disaster.

“You won’t be getting any votes down here buddy,” one man said. “You’re an idiot, mate,” another tactfully added. “You really are.” One resident, who arrived to greet the prime minister with what appeared to be a goat by her side, asked why Cobargo had only received four fire trucks to help battle the blazes.

Morrison promised help was on the way and asked for patience. “What we are saying is we cannot control the natural disaster but what we can do is control our response,” he said. But there are, in fact, a few things Morrison’s government could do to control the extent of the “natural disaster” — like rapidly phasing out fossil fuels.

Unlike a majority of Australians, Morrison has been slow to realize that climate change poses an immense threat to his nation’s health and safety. As recently as December 22, Morrison told journalists it’s “not credible” to suggest a link between climate change and any individual wildfire. (The science linking this year’s catastrophic wildfire season to rising temperatures is robust.). In November, as Aussies took to the streets to protest the government’s inaction on the climate crisis, Morrison vowed to stop climate activists who pressure companies not to do business with the coal-mining industry. “We are working to identify serious mechanisms that can successfully outlaw these indulgent and selfish practices that threaten the livelihoods of fellow Australians,” he told a group of miners.

But public outcry over the government’s handling of the fires has forced the prime minister to defend his controversial positions on the crisis. On Wednesday, Morrison called a national security meeting to assemble a response to the crisis, and he made sure to say that climate change is a factor in the wildfires. “Our emissions reductions policies will both protect our environment and seek to reduce the risk and hazard we are seeing today,” he said. There’s no telling whether the public outcry over the apocalyptic wildfires will prompt Morrison to revisit his emissions reduction policies. What’s clear, however, is that politicians around the world are going to have a hard time openly denying climate change when its effects are on full display.