At Golden Globes, pregnant actress makes clear that abortion helps women choose when to have kids, not just if 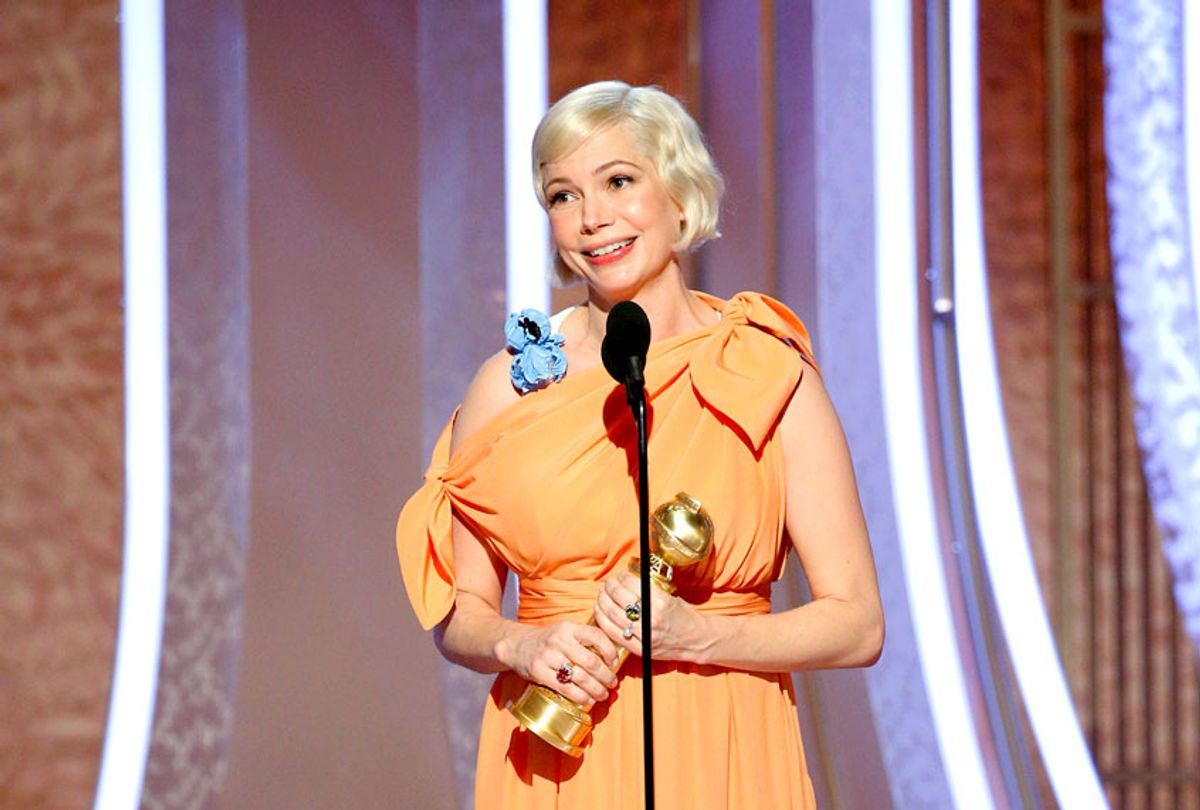 Michelle Williams accepts the award for BEST PERFORMANCE BY AN ACTRESS IN A LIMITED SERIES OR A MOTION PICTURE MADE FOR TELEVISION for "Fosse/Verdon" onstage during the 77th Annual Golden Globe Awards at The Beverly Hilton Hotel on January 5, 2020 in Beverly Hills, California. (Paul Drinkwater/NBCUniversal Media, LLC via Getty Images)
--

Because they serve alcohol at the Golden Globes, it's not uncommon for the post-awards show chatter to be about speeches that were a little bit, let's say, loose. But the most memorable speech Sunday night was made by a sober and pregnant Michelle Williams, accepting her award for best actress in a limited series for "Fosse/Verdon."

"I wouldn't have been able to do this without employing a woman's right to choose," said Williams, who looked resplendent in a tangerine dress and with that pregnant glow. "To choose when to have my children and with whom, when I felt supported and able to balance our lives, as all mothers know that the scales must and will tip towards our children."

She went on to encourage women to vote for their own rights, noting it's "what men have been doing for years."

It was a welcome speech for a couple of reasons, not the least of which is that it drew attention to the fact that abortion rights are under the worst threat they've been in since Roe v. Wade was decided in 1973. With Donald Trump's nonstop antics and a possible new war in the Middle East, most Americans are probably not aware that the freshly minted anti-choice majority on the Supreme Court will hear a case on March 4 that is intended, rather explicitly, to overturn Roe. In all likelihood, the court will issue a decision in June that vacates women's reproductive freedom as a constitutional right. Perhaps by using the intense spotlight of a glitzy awards broadcast, Williams can get more people to pay attention to the fact that the right to abortion is about to be terminated.

Just as important, by giving this speech while pregnant, Williams challenged a longstanding stereotype that the anti-choice movement loves to wield: The utter falsehood that having an abortion is incompatible with being a mother.

As hard as it may be to comprehend, a shocking number of people have been bamboozled by right-wing propaganda into believing that a woman can have an abortion or she can be a  mom, but she can't do both. There's an entire cottage industry of anti-choice propagandists who are dedicated to sowing the myth of "abortion regret," based on the premise that women who have abortions end up despondent about it in later years, as if they had given up their one and only chance at motherhood.

This "abortion regret" myth has been used to justify all manner of ridiculous restrictions on abortion and legal punishments of women who get abortions. For instance, while the real purpose of mandatory ultrasounds for abortion patients is to make the procedure more humiliating and expensive, conservative lawmakers who pass these laws claim it's about helping women avoid a decision they'll regret. Similarly, mandatory waiting periods are justified as a chance for women to "think it over," when in fact their primary purpose is to make scheduling an abortion unnecessarily difficult and to dole out more punishment and expense to women who have to do it.

Even more bafflingly, anti-choice legislators in recent years have pushed for laws mandating that doctors deceive their  patients by telling them abortions can be "reversed" even after the procedure has begun. In reality, the "abortion reversal" procedure is dangerous and almost certainly doesn't work.

Again, actually "reversing" abortions isn't really the point of these laws. Instead, this is all just more propaganda, meant to prop up the idea that there are thousands of women who start to have an abortion without really thinking about it and then, in a panic of regret, try to claw back that decision. It's about anti-choicers spreading the myth that abortion is incompatible with motherhood.

There are plenty of dry statistics that can be thrown at the public to show that this notion that women have to choose between motherhood and abortion is a lie. Three out of five women who have abortions are mothers already. Many women who get abortions do so because they want to be better mothers, either to the children they may have already or the ones they may have in the future.

It's simply false to claim that abortion is an agonizing decision for most women or that "abortion regret" is even a thing. In reality, women who get abortions are more confident about their decisions than women who get knee surgery. Research shows that, years after the fact, 95% of women who've had abortions are still happy with the decision. In contrast, women who want abortions and don't get them have more problems in life. They're more likely to suffer poor mental and physical health, to get stuck in abusive relationships and to lose educational and job opportunities.

The reason women don't regret abortion is simple: If they want to have a child or children later in life, they can generally do so. Despite the widespread myth that abortion renders women infertile, in reality there's no link between safe abortion and infertility. Abortion simply makes it easier for women to have kids when they are better prepared to raise them.

Sadly, the propaganda pitting mothers against women who have abortions, as if they weren't the same people, has real power. The head of NARAL, Ilyse Hogue, told the Washington Post in 2015 that anti-choice activists she encountered while pregnant with twins often refused to accept that an abortion rights proponent might also be an expectant mother.

"At one point, she says," the article read, "she walked into a hearing on Capitol Hill and an antiabortion advocate looked at her swollen belly and asked, 'Is that real?'"

"As though I actually had strapped on a prosthetic baby bump to wear to a hearing for some reason," Hogue marveled.

There are plenty of women out there who have been visibly pregnant while calling for the right to abortion, of course. But few, if any, have the reach of a movie star whose personal life has been tabloid fodder for nearly two decades. Perhaps people who've never given this issue much thought before were exposed to the fact that, yes, mothers and expectant mothers can be pro-choice — and many of them have had abortions.

To be clear, Williams did not flat-out say that she's had an abortion, but that's the clear implication people are taking from the personal tone of her comments. Standing there, as the mother of a teenager she had with the late Heath Ledger and pregnant by her fiancé, "Hamilton" director Thomas Kail, Williams illustrated a reality of women's lives that anti-choicers have all too successfully concealed with their lies about "abortion regret."

Williams shared an important truth: Abortion doesn't take away women's ability to have families. On the contrary, abortion often makes it possible for women to have the healthy, happy families of their dreams.