"Uncut Gems" and the drive to look like a somebody, no matter what the cost 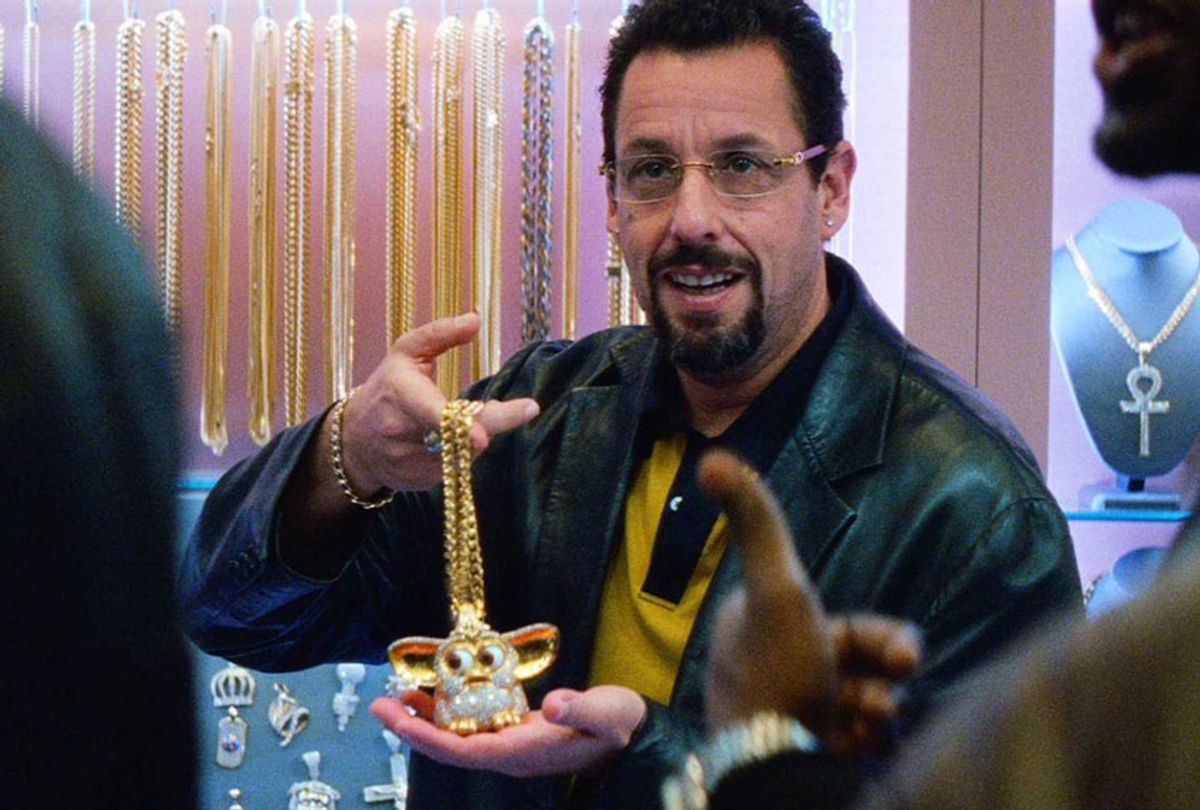 "Uncut Gems" is gem. The 2019 film directed by ‎Josh ‎and Benny Safdie left me with some things to think about and I’m going to do the same for you.

I normally don’t read movie reviews before seeing a film as I don’t want to be influenced by someone’s opinion or have a critic's voice bouncing around in the back of my head while I try to figure out if I like the protagonist or not. In the case of "Uncut Gems," I hate the protagonist, but I love the film.

Adam Sandler is the lead, but it’s not one of those goofy, fun-loving comedies with a feel-good ending that the comedian is known for. It’s the exact opposite; nothing feels good about this movie. Seeing the way Sandler looks in the trailer with his ridiculous glasses and '90s boot-cut outfits could lead you to believe that he’s up to his old antics. Learning that former NBA star Kevin Garnett has an important role in the film would support your claim, but you would be wrong. Garnett is actually a great actor who will get more work in Hollywood; he’s as good an actor as he was a ball player and a perfect fit for "Uncut Gems," which is a roller coaster ride from the beginning of Act 1 to the final seconds before the credits roll. The anxiety gave me a 135-minute nose bleed.

Sandler plays jewelry store owner Howard Ratner, a gambling-addicted reject who always loses, even when he wins. Quickly, you realize that he doesn’t really want to win at anything, he just wants to chase, chase, and chase – a real thrill junkie. And even though the way in which this story is told is clever, you probably read it, heard it, or saw it before. The most sobering moment in the film for me revolves around lifestyle. Lifestyle, access to celebrities, our addiction to fame and the billions of dollars we spend on things that don’t really matter in the grand scheme – excess was the culture I was raised on.

As an ashy-kneed fourth grader, I had wiped my Air Jordans down until they gleamed, placed them over Nike ankle socks, and walked them up to my main man Mr. Kim on Monument Street. Mr. Kim's shop was kind of like a Walmart for street kids. He had Nike, Fila, Puma, African medallions, Starter jackets, and exactly what I was looking for that day, gold teeth.

“Did you ask mom if it was okay for you to have these?” he said pulling out the tray for me to examine.

I slammed a $50 my uncle had given me on the counter and said, “I want four crowns. That’s not too flashy, right?”

"They're very, very nice." he responded.

Mr. Kim looked at my insanely large incisors and grabbed the biggest set of crowns out of the case. He dipped them in some type of fluid that I guess was sanitizer because people came in and out of the store and tried teeth on all day. He then passed them to me — perfect fit. I wore them every day, and smiled for two weeks straight until they split.

I knew they were fake; real golds were custom, cost hundreds of dollars,  and at the time you had to get them from a dentist. No dentist in their right mind was going to make a mold of a 9-year-old's mouth and then cement gold into it . And customized fronts weren’t as popular and readily available in 1990, so us kids wore fake gold caps. Kids who couldn’t afford the caps wrapped aluminum foil around their teeth for the same look. We laughed at them the same way the older kids with real gold teeth laughed at us.

Fake teeth or not, we all wanted to look like we had money. Gold teeth were a clear sign of wealth in my neighborhood, and everybody wore them, even though most of us were broke. They literally served no purpose other than ego fuel and the ability to look like a somebody, even if we felt like nobodies. There are a few people like me who emerged from the poverty that defined our east Baltimore neighborhood, but the remaining former foiled teeth-ers and gold cappers are still chasing that feeling and trying to connect to the wealth we were never supposed to have through material things.

Lakeith Stanfield’s character Demany is the perfect bridge between those worlds. Demany is Howard’s associate,  a smooth, street smart cat that is connected to athletes and entertainers with money. Most of them, like Garnett, came from poverty, have made millions off of their talents, and are excited to show the world what they have earned. Forget that NBA salaries are listed on ESPN and celebrity net worths are Google-able — these guys show wealth through cars and worthless jewelry bought from guys like Ratner.  Demany hangs in clubs, around beautiful women, and is a real lifestyle guy — one of those people you look at and think, “Wow, I want to live like him.” You don’t know if he’s broke or rich or what he does for a living; you just see that he’s cool and you hope it’s contagious. Demany collects the millionaires chasing his cool, running away from the time they spent in poverty and hand delivers them to world class rip-off artist like Ratner.

Ratner isn’t a regular jeweler, even though he is. Ratner is special, even though he isn’t. Ratner seems like he’d only serve the best of the best, when in reality, he’ll sell anything to anybody, he will sell out anybody. Ratner's setup, language, celebrity pics, and persona scream elite when he is anything but.

So why does this work?  Simple: it's our value system.

Not the value system of a certain race or class really, just the basic American idea of money, and not looking like or being thought of as poor. From mom making sure you are extra clean in your new clothes as a kid when attending family functions to the people who gawk at your wife’s engagement ring and ask, “How many carats did he get you?” as if carat size and new clean clothes can measure love. The most eye-opening scene for me is when Garnett shows that he knows Ratner is a con — a rip-off king, a person who extracts jewels from the poorest of countries, adds his zillion-percent markup and then sells them to people who need to shine because our value system requires it — but he still is open to do business with this person. Because nice jewels are a key ingredient in being elite.

I don’t wear $100K chains or much jewelry at all, but I do like nice things, and like Garnett, I know it’s not really worth the money at the end of the day — but I would still spend anyway. "Uncut Gems" shows the other side, how the money we spend promoting status aids exportation on a higher level, and has already made the need for me to spend less and not fund these abusive industries and abusive people like Ratner more urgent.