Here's why the west coast could shift time zones in 2020

As the west coast goes, so goes the country, some say. Will the U.S. lock the clock forever? 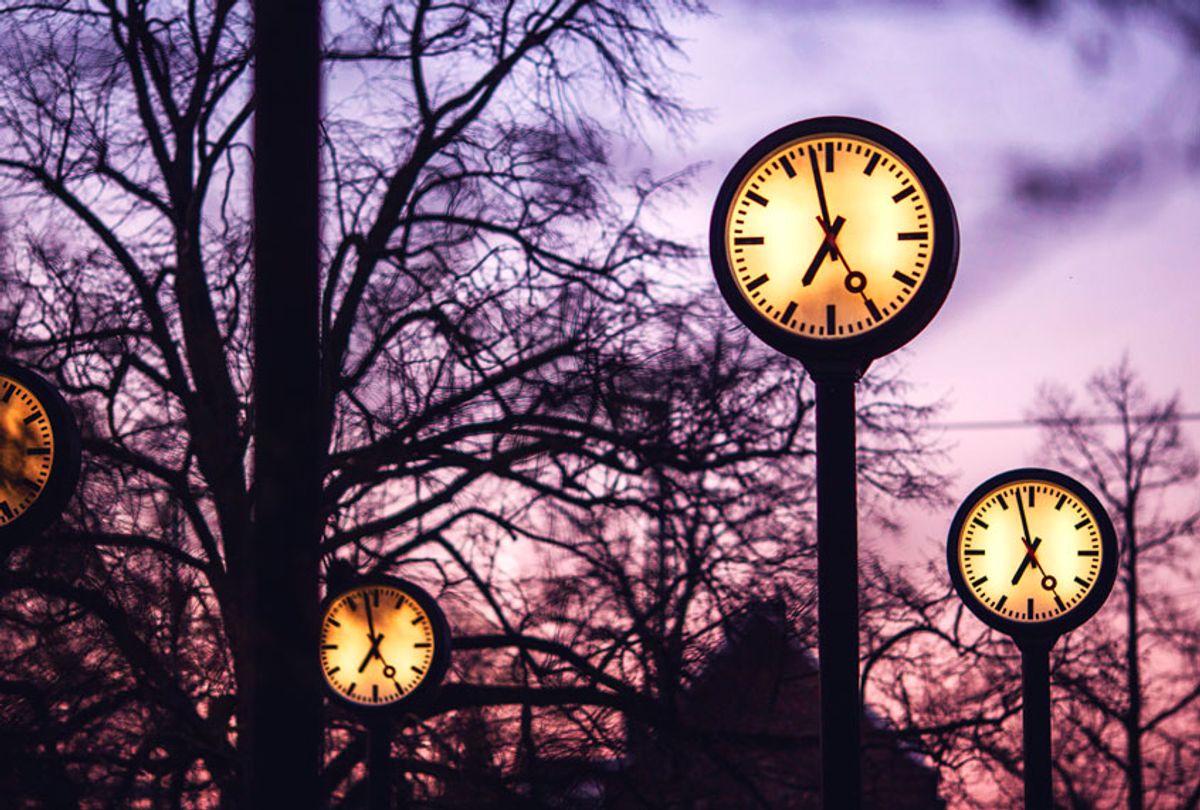 The "Zeitfeld" (Time Field) clock installation by Klaus Rinke is seen at the entrance of the Suedpark, in Dusseldorf Germany. (Maja Hitij/Getty Images)
--

Because both the east and west coast use daylight saving time, those who work for companies with offices on both coasts can rely on a constant three-hour difference between the two coasts. Yet as the entire west coast seems poised to adopt year-round daylight saving time (DST), bi-coastal families, friends and businesses may soon face a peculiar scheduling shift that happens twice a year. If the change occurs, the New York Stock Exchange would, from the perspective of a trader in Seattle or Los Angeles, open at the equivalent of 6:30 AM half the year and 7:30 AM the other half. That raises the question as to the cultural effect of such a shift — and whether it would be easier for the whole country to adopt full-time DST.

In the beginning of 2019, Oregon and Washington legislatures both voted by wide margins to adopt permanent daylight saving time. California is expected to follow suit this year to end the biannual time switch; voters in that state already voted in favor of letting the legislature change daylight saving time rules, in 2018. Prior to signing Washington's permanent DST bill, former Democratic presidential candidate and Washington state governor Jay Inslee said it was "important to stick together as West Coast states," encouraging the three west coast states to only shift to permanent DST all at once to avoid economic friction.

While the west coast appears unified on the time shift, one wonders if such a shift could wreak scheduling havoc among companies that often have virtual meetings with participants on both coasts. Could such a change could further the perception of a west-east coast cultural divide? Experts who have been following this seem to think not, since a similar movement is gaining steam on the east coast, too. Scott Yates, a startup CEO who identifies as a daylight saving time activist, thinks that the block of west coast states shifting their clocks will motivate other states to pass similar legislation that could spur federal changes.

Meanwhile, what happens on the west coast all comes down to California.

In November 2019, California Assemblymember Kansen Chu announced that he would introduce a resolution in January urging Congress to authorize California to shift to permanent DST. In 2018, a majority of Californians voted yes to Prop 7, which gave the state legislature the authority to decide whether California should stay on permanent daylight saving time. That allowed Chu to introduce Assembly Bill 7, which was delayed in 2019 until the second half of the legislative session in 2020, which is this month.

Yet under the federal Uniform Time Act of 1966, states cannot shift to permanent DST without an amendment to federal law. Federal law allows states to be on year-round permanent standard time (winter), but not permanent DST (summer). Daylight saving time year-round would give people an extra hour of daylight during the winter. However, the sun would rise later. (Notably, Arizona has not observed daylight saving time since 1968; Hawaii has never observed it.)

The last change to DST occurred when former President George W. Bush signed the Energy Policy Act of 2005. Considering the state of Congress, it is unclear if daylight saving time shifts would be a priority or not for the federal government. In March 2019, Trump tweeted "Making Daylight Saving Time permanent is O.K. with me!"

"If California goes, that will be a big wakeup call for the east coast," Yates told Salon.

Aside from the states on the west coast, Alabama, Arkansas, Florida, Nevada, and Tennessee have approved legislation to make daylight saving time permanent, too.  In Florida, the effort was led by Republican Senator Marco Rubio. "It has become clear this antiquated practice no longer serves any purpose," Rubio wrote in a letter to the Senate Committee on Commerce, Science and Transportation.

Interestingly, the shift to permanent daylight saving time is a bipartisan issue, rare in today's political climate — which may be, in part, why it is becoming popular today.

"Maybe that is part of it — it allows people to talk to their Republican and Democratic friends with it getting rancorous," Yates said.

Aside from a sense of cohesion and the sheer inconvenience of changing the clock, there are other reasons supporters are in favor of sticking to permanent DST, like preventing heart attacks or car crashes, which studies have said to find a rise in as a result of the twice a year change. Studies have shown that changing the clock can cause less sleep and heart problems. Likewise, biologists say it disrupts our circadian rhythms, the internal clock of our bodies.

"It's actually deadly," Yates added. "Heart attacks go up, you see more workplace accidents, you don't need much argument after that, if there was some consumer safety item killing five people a year, we would stop selling it or fix it," Yates said, noting that the deaths due to the time change haven't been firmly calculated, but do seem to be a real consequence.

Some critics argue that tracking the effects of the time change are hard to prove.

"Researchers have studied a stark change, the day after daylight saving time, or a week after, but what is so much harder to study is the entire summer or winter," Severin Borenstein, a Professor of Business Administration and Public Policy at the Haas School of Business at the University of California at Berkeley, told Salon in an interview. "Yes, it might be the case that there are more accidents the week after spring forward, but if we didn't do it in the winter we would get an overall higher accident rate throughout the winter, statistically we would."

"I suspect if we had everyone going to school in the dark we would have a lot more problems," Borenstein said, who says he believes it is a bad idea. Not only because of darker mornings, but it could cause more businesses to have "winter" and "summer" hours, and those would be implemented at different times.

"I think it would be much more costly," he said. "Daylight saving time isn't a pain, but what the real pain is is that the Earth has a tilt to it, when the winter comes the length of days change, so unless you're right on the equator, that is the fundamental problem we have to deal with every year."

When asked why this issue is coming to the forefront now, Borenstein said it's interesting to think about, and that he is impressed by how opinionated people are about it.

"Their knee-jerk response is that they hate the shift so much they think we should just get rid of it," Borenstein said. "If we do go on permanent DST I will be interested to see how it works out, but my guess is that people would say in a few years it isn't a good idea."

When asked about the cultural divide, Borenstein said he is "too much of an economist" to have an opinion on that.

Yates on the other hand, said he believes if California moves to permanent DST, the whole country will lock the clock.