All the presidents' lies: Inventing excuses for military action is nothing new 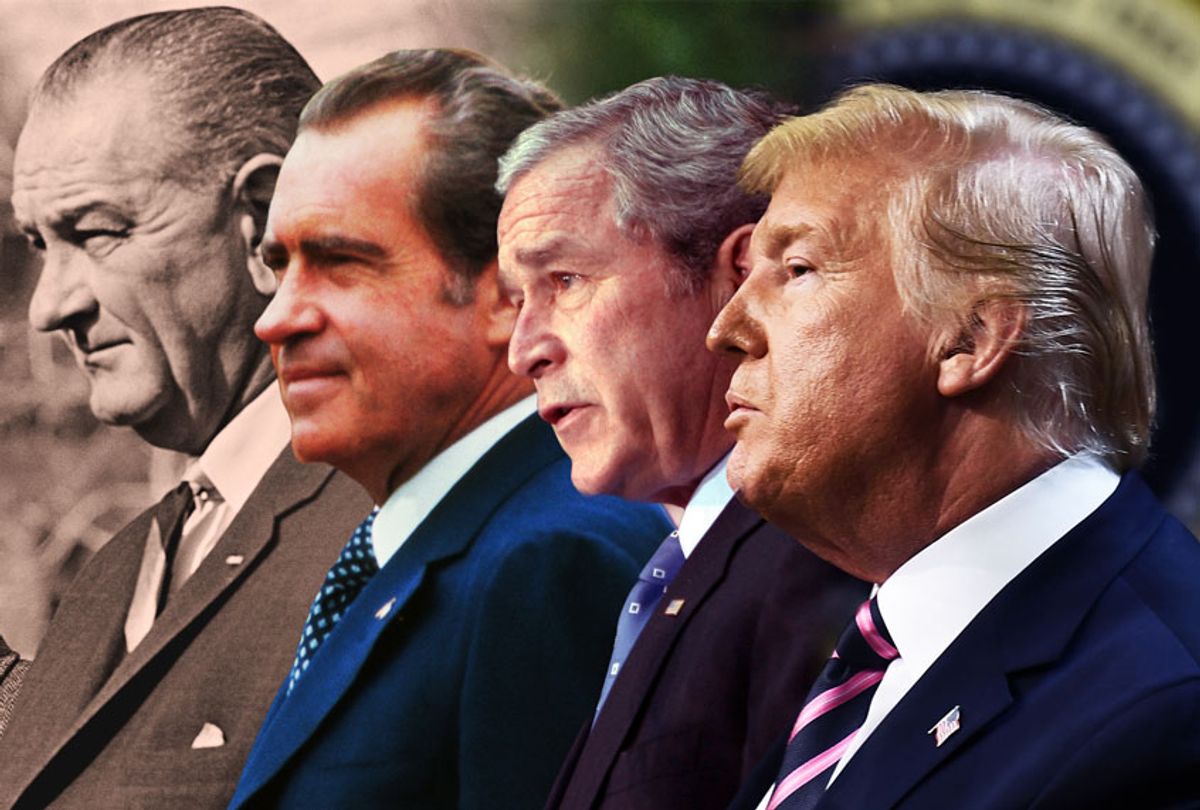 I don't think it's controversial to point out that governments lie to their people about war. We have been through too many examples in recent memory, right here in the United States, to fool ourselves into thinking that it's unusual. Governments often lie about the reasons for getting into wars, how much wars cost in blood and treasure and how well the war is going once they get into it.

We have a pathological liar for a president at the moment and a party and administration that is eager to cover for him. So when they take military action, the press and the general population are more skeptical than usual. But let's not pretend this is the first time that's happened. It's just that Trump and his henchmen are incompetent and can't even lie very effectively.

From the alleged mining of the USS Maine, the catalyst for the Spanish-American War — which turned out to be a boiler explosion — to the Pentagon Papers, which showed that the U.S. government had been lying about the progress of the Vietnam War for years, there is ample evidence of American officials being dishonest when it comes to military affairs.

The most obvious examples of the government lying us into war are quite recent, of course. The Iraq invasion of 2003 was based upon the big lie that Saddam Hussein had weapons of mass destruction. George W. Bush's officials knew Saddam didn't have the capability to make a nuclear bomb, which was why they used the vague "WMD" term as a sly way of implying an existential threat.

That was just one element of a full-fledged propaganda campaign waged to persuade the American people to attack a country that hadn't attacked us. In the wake of 9/11, it wasn't all that difficult, particularly with the media wrapping itself in the flag so tight it almost strangled itself.

Indeed, Pence was at it again just last week.

This 2015 poll from Fairleigh Dickinson University demonstrates that many Americans still believe what the government told them:

Overall, 42 percent of Americans believe that U.S. forces found active weapons of mass destruction program in Iraq. Republicans are more likely to hold this belief than Democrats: Fifty-one percent of Republicans think it's "probably" or "definitely" true that an active program was found after the 2003 invasion, with 14 percent saying that it was definitely true. Still, large portions of other groups think that the WMD program, a major part of the justification for the invasion, was actually found, including 32 percent of Democrats.

But what about the great and glorious first Gulf War, back in 1991? That "victory" was the main reason Democrats with presidential ambitions voted for the second go-around in 2003. Anyone who had voted against the first Gulf War resolution under George H.W. Bush was considered dead meat in presidential politics afterwards. Democrats were literally fighting the last war when they voted for the Authorization to Use Military Force after 9/11.

That magnificent victory in '91 was the last righteous war, right? Poppy Bush got the whole world together, everyone pitched in with troops and funding, the air war was a spectacular video game and they pushed Saddam out of Kuwait and right back to Baghdad. It was American power at its best. Except that too relied on lies to sell it to the people.

According to John R. MacArthur's book "Second Front: Censorship and Propaganda in the 1991 Gulf War," the Bush administration hired the public relations firm Hill & Knowlton to run focus groups on how to convince the public to back military action. The one thing that really got people worked up was baby killing. (Nothing new in that. World War I propaganda heavily featured "the Hun" bayoneting babies in cartoon form.)

Prior to the vote, two congressmen with strong ties to Hill & Knowlton, Rep. Tom Lantos, D-Calif., and Rep. John Porter, R-Ill., called a 15-year-old Kuwaiti girl named Nayirah to testify before Congress. She claimed that she had volunteered at the al-Addan hospital and said, "While I was there I saw the Iraqi soldiers coming into the hospital with guns and going into the room where 15 babies were in incubators. They took the babies out of the incubators, took the incubators, and left the babies on the cold floor to die."

It was a major news story and had a major effect on public opinion, reportedly swaying some members of Congress to vote for the war. But it turned out that the witness was the daughter of the Kuwaiti ambassador to the U.S., and human rights organizations found no evidence that anything like what she described had actually happened.

The New York Times ran a little story a few months after the war discussing the controversy.

It's important to keep all that in mind as we observe the unfolding Iran debacle and President Trump's attempts to justify a decision that pretty clearly was not based on any evidence of an imminent threat. This administration didn't feel the need to hire a PR firm to build public support, because its officials acted out of a belief that the president can order any kind of military action on his own and there is no need even to consult with Congress, much less seek its approval.

Following the attack that killed Iranian Maj. Gen. Qassem Soleimani, official explanations have been vague and contradictory. The briefings to the congress were called "sophomoric" and "absurd" by Democrats and even some Republicans, although the usual gang of GOP toadies has come out and flamboyantly genuflected to the president, saying they were fully satisfied. The administration's only nod toward a standard presentation to the public was the halting speech Trump gave on the morning after the restrained Iranian response. Since then, he has been cavalierly throwing out new alleged threats that appear to have no basis whatever, leaving his henchmen to sputter incoherently trying to keep up with him.

First, Trump casually mentioned in a brief press encounter that Soleimani had been planning to blow up the American embassy in Iraq. At a rally later that night, he embellished that unfounded claim even more by claiming the plan had been to blow up four embassies. Nobody who attended the briefings had heard anything about that.

Neither did the secretary of defense, apparently, and he reads the president's daily briefing:

The lies are clumsy and completely preposterous. But that's nothing new for Trump. And unfortunately, lies about war are nothing new for the U.S. government either. Removing Trump from the White House may be important. But it won't fix that problem.