How both "Hustlers" and "Little Women" anticipated their own Oscar snubs 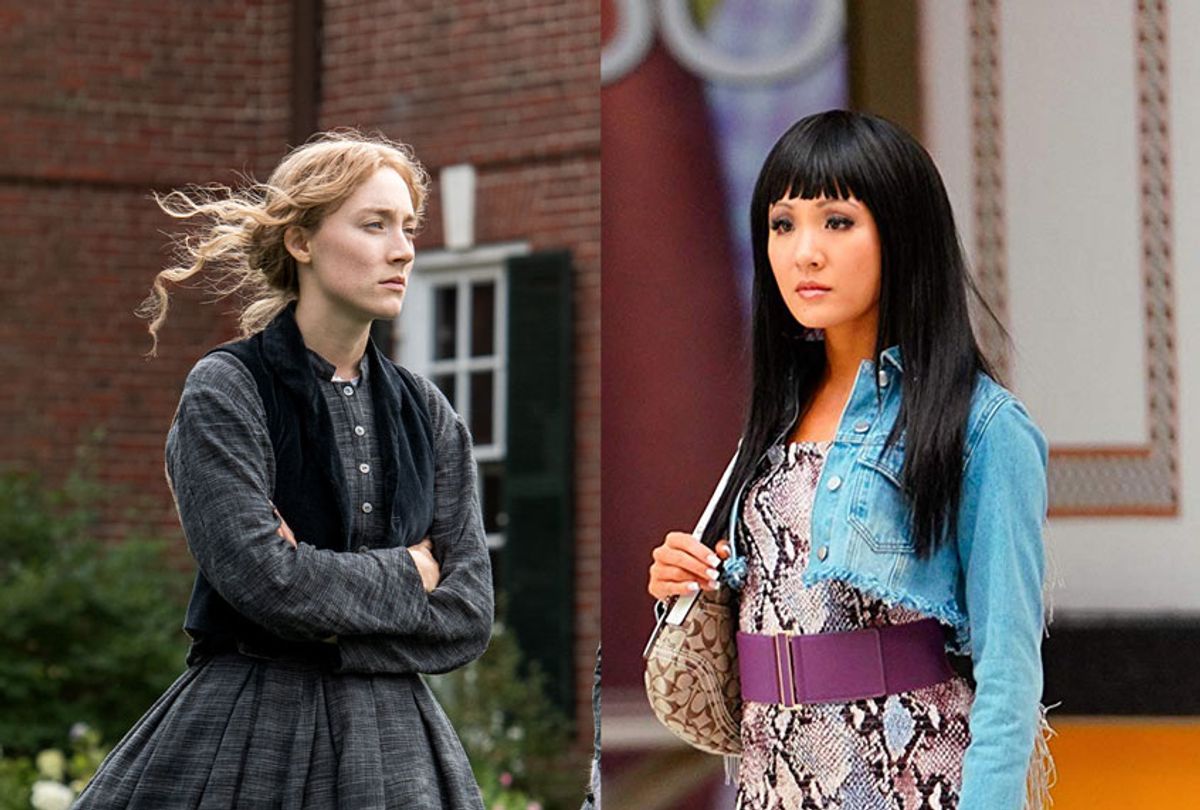 Oscar nomination announcements, otherwise known as the annual reminder that Hollywood is dominated by white guys with narcissistic and blinkered tastes, have come and gone. This year was particularly brutal when it comes to the Academy overlooking the contributions of female directors, which particularly stung when Todd Phillips, an overprivileged whiner who directed the truly dumb "Joker", managed to snag a directing nomination.

The irony deepens because two of the overlooked lady directors — Greta Gerwig and Lorene Scafaria — both made movies that far surpass the ability of Phillips, in his silly clown movie, to tell a story about what happens to people whose considerable talents are being squashed by the cruel world that doesn't care very much about people like them. But these movies are about women, a group that faces very real economic, legal, and social oppression, so I guess it's not as interesting as watching Joaquin Phoenix chew scenery.

Still, I recommend that readers who are interested in watching genuinely smart movies that tackle the subject of creative ambition and struggling against The Man, to have a mini film festival and watch Gerwig's "Little Women" and Scarfaria's "Hustlers."

On the surface, these two movies may not seem to have much in common, beyond being ensemble films about women (which is unusual enough in itself). But watching them in quick succession, what's striking is how these two movies are different, but equally compelling, takes on the same story: How creative, ambitious women struggle to succeed in an economic system run by men who don't care very much to see women as full human beings.

Emphasis on "economic," because the driving question of both "Hustlers" and "Little Women," which are set more than 150 years apart, is one of money and how creative women have to distort or even destroy their own work in order to appease the men out there who control the purse strings.

[Editor's Note: Beware of spoilers from here on out.]

This theme is not particularly subtle, though beautifully wrought, in "Little Women," which has a much chattered-about "twist" ending that stomps whatever showy but empty garbage certain other clownier movies might come up with. For, as readers of the book know, the original Alcott novel has a deeply unsatisfying ending, where the main character, Jo rejects marrying her beloved friend Laurie and then ends up marrying a crappy old man who is mean to her, while Laurie marries Jo's bratty younger sister Amy.

One interpretation of that ending is that Alcott was trolling a bit with it. As she wrote to her uncle at the time, "publishers are very perverse" in their demands and "so my little women must grow up & be married off in a very stupid style." Alcott wanted Jo to be a spinster, this view suggests, and therefore married her off to a man that also made readers wish Jo had remained a spinster.

Gerwig takes that interpretation and runs with it, showing Jo (Saoirse Ronan)  — an aspiring writer who, on-screen, doubles as an Alcott stand-in who is explicitly writing a book called "Little Women" — grumpily agreeing to tack a marriage plot on the end of her book in order to appease a sexist publisher. Viewers are left to wonder whether the extreme silliness of Jo's marriage is "real" or fictional within the fiction of the movie. (The real Alcott never married.)

Whatever meta games you want to play with the narrative, however, what is unmistakable is the point of this twist ending: To illustrate the often ugly compromises creative women have to make in order to succeed in a male-dominated world that, as the Oscar snubs show, still doesn't see women as legitimate artists in their own right.

And Jo's portrayed as the lucky one, who is holding her leather-bound book with a satisfied smile at the end. Her other two living sisters, Meg and Amy, explicitly realize that they're probably never going to make it as artists and end up in marriages that viewers are meant to be discomfited by.

"Hustlers" is, if anything, even more cynical about money, art, and gender. Even though it takes place in a world where women have the vote and the word "spinster" has no real meaning anymore, the women of the story are just as trapped by their gender as those in "Little Women" and are just as threatened by the very real possibility of being sucked into poverty because of it.

They are also, as the opening section of the movie makes clear, artists. Ramona, played by the Oscar-snubbed Jennifer Lopez, enjoys a spectacular opening scene that demonstrates the creativity and athleticism she pours into stripping, leaving the other strippers at the club in awe of her skills.

What follows is the collapse of the economy, emptying the strip clubs of customers, which leads in turn to a zany crime story in the style of classic gangster films like "Goodfellas." Except that instead of once again digging into the well-mined area of using crime films to explore (and sometimes romanticize) toxic masculinity, "Hustlers" digs into the darker side of what women will do if they feel marginalized and forgotten.

The characters aren't sympathetic, exactly — this is a much better tribute to the Scorsese-style crime movie about anti-heroes than "Joker" ever will be — and, as their inevitable downfall shows, there's really no such thing as a victimless crime. Still, their reasons for drugging and robbing men aren't entirely unsympathetic, either.

At the beginning of the movie, the strippers are flush in the heyday before the crash, when rich Wall Street types enjoyed showing off their wealth by dumping in on the strippers. And it's only because those rich men abandon the strip club after the economic crash, which made throwing money around less fashionable, that the now-desperate strippers turn to crime.

These women are driven by resentments against men that they can't even articulate to themselves. The male customers, it turns out, never really appreciated the hard work and creativity strippers put into their work, and didn't think twice about what happened to the women they stopped paying for that work. Having the esteem of other women may be nice, but it won't pay the bills.

The scheme the strippers hatch plays out as more than an easy way to get money. It's revenge against men for rejecting them. But ultimately, victimizing individual men is no way to get even for what men, as a class, do to women. Real justice for women remains elusive.

Both "Little Women" and "Hustlers" circle around this unfortunate conclusion: Men simply can't — or more likely, won't — accept women fully as creative professionals. As "Walking Dead" writer and producer Glen Mazzara tweeted Monday, white men are "feeling threatened by recent pushes to hire more women & POC" and therefore "are not voting for films made by those people because that would validate those films & create a shift in the market place."

This is a problem, since men control who gets rewarded for what work. We see that in the movies, as women's ability to make a living depends so wholly on the whims of fickle men. And we see it in real life, when the tremendous work these female directors did to get these movies to the screen is being shrugged off by the male Hollywood establishment that is in charge of handing out accolades and recognition. Success without compromise or cheating remains elusive for women in a male-dominated world.