Whatever Sanders said to Warren about whether a woman can win in 2020, it's a no-win situation for both of them 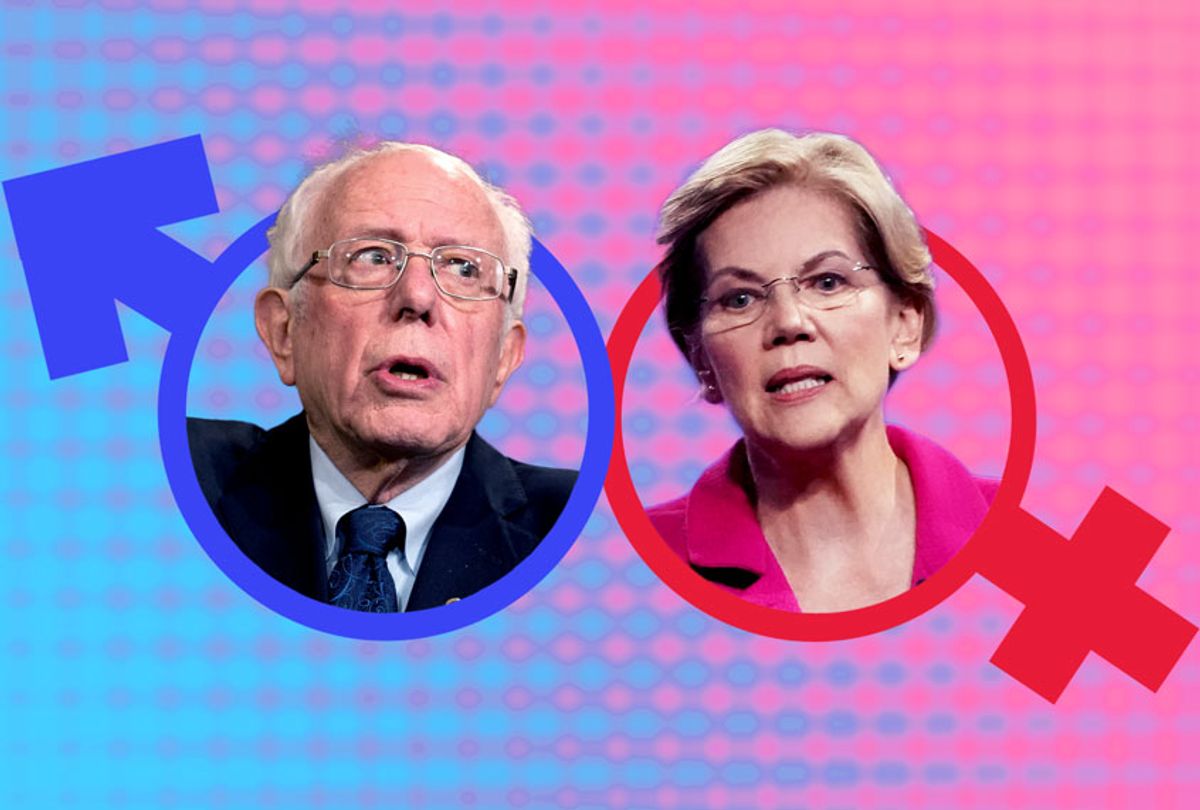 Late on the day before the first Democratic primary debate of the year — and the last one before the Iowa caucuses on Feb. 3 — CNN published a report saying that during a meeting early last year, Sen. Bernie Sanders of Vermont had told Sen. Elizabeth Warren of Massachusetts, his primary opponent and friend, that a woman couldn't win the 2020 presidential election.

After many hours, Warren's campaign released a terse statement noting that while it was true that Sanders had told her "he disagreed" with her belief that a female Democrat could win, she had no desire to discuss a "private meeting" because "Bernie and I have far more in common than our differences on punditry," noting that the two progressive New England senators have long been "friends and allies".

Sanders, for his part, claimed that "staff who weren't in the room are lying about what happened" and characterized the conversation as one where he told Warren "that Donald Trump is a sexist, a racist and a liar who would weaponize whatever he could" and insisting that he does believe "a woman can win in 2020."

On social media, accusations of lying flew wildly, and Warren supporters leaned heavily on the language of #MeToo and believing women — even though, to be absolutely clear, no one is accusing Sanders of doing anything untoward. But this not-quite-dispute was nonetheless being positioned as a "he said/she said" situation, where one of them had to be lying and the answer was determined by whom you happen to support.

But the truth is, as philosopher Kate Manne explained on Twitter, there's a space where both interpretations of this conversation have legitimacy. On one hand, it's true that a female candidate would face an uphill battle against the ingrained sexism of the electorate, not to mention the vicious misogyny of Donald Trump. So it makes sense that Sanders sees these comments merely as "telling it like it is," even if one wonders why he seemed to feel that Warren needed telling, when she's got a lifetime of direct experience.

On the other hand, it's also true that men often use the "it's not me, it's the world" cover to discourage women's dreams and ambitions, and often for self-serving reasons. Many women have had the experience of a man who, because he likes having someone else do the housework or because he feels his ego is threatened, "informs" a woman in his life that she must scale back her goals because of sexism — not his sexism, of course, but you know, someone else's.

So it's entirely possible that both things are true and no one is lying: Warren heard him say a woman couldn't win this election, and Sanders felt he was just telling it like it is. This would also explain why Warren is insisting this is no big deal, as his comments were, at worst, a bit of self-serving mansplaining rather than a real effort to shoot down her campaign.

No doubt Tuesday night's debate in Des Moines will help clarify these issues. In the meantime, it would do well for supporters of both candidates to dial down the conspiracy theorizing that's going on right now. Despite some of my off-the-cuff speculation Monday night on Twitter, in the cold light of day I think the ugly truth is that this story hurts both candidates, potentially quite badly.

For Sanders, the damage is obvious enough. Because Bernie has a flock of stalwart fans who are super-duper-don't-bother-denying-it sexist, and who enjoy trolling and demonizing feminists online and then turning around and condescending to women in real life, plenty of feminists are suspicious that Sanders himself harbors some old-fashioned views about keeping that glass ceiling in place, even if he wouldn't admit to them. Call it the pig-attracts-pig theory of politics, and this story is seen as justification for these fears.

I think this is an overblown fear. The truth is that a lot of people share the concerns that Sanders reportedly expressed in his meeting with Warren. I've had more women than men privately tell me that they think a woman can't win this time around. More to the point, whether or not Sanders, like all liberal men and plenty of women, has stubborn prejudices lurking in his heart (though woe unto those who acknowledge it), what matters far more is that he has signed onto the feminist agenda and, if elected, would almost certainly promote policies meant to ensure women's equality.

And while there are also plenty of Sanders stans distastefully proclaiming that Warren is a snake and a liar, in truth this story does nothing to help Warren, and if anything is likely to hurt her worse than it hurts Sanders. As Manne noted in her Twitter thread, "(even lightly) challenging a powerful white man's moral judgment is among the ultimate bases for misogynist aggression."

Writer Moira Donegan agreed, tweeting that "women get no rewards from complaining about sexism."

One would hope, after #MeToo, that this lesson would have sunk in: Women fear speaking out at all, because while there's no certainty that it will make any difference in male behavior, you can be absolutely certain that it will make your personal life a living hell from all the blowback you're likely to receive. That's true when the subject is as serious an issue as rape. When it's something minor, like a bit of obnoxious but ultimately harmless mansplaining, the costs outweigh any potential benefit.

Hopefully, Sanders and Warren will be able to answer the inevitable questions about this during Tuesday's debate in a way that allows for empathy and nuance, instead of flattening these two complicated and important progressive figures into caricatures of a lying woman and a piggish man.

What's particularly galling about this is that the Warren v. Sanders narrative, by serving to undermine both of them, most clearly benefits former Vice President Joe Biden, who may well be able to slide in and yank the nomination from the wreckage. A few weeks ago, Biden made a similar statement in public to the one Sanders allegedly made in private, in a speech where he said that while Hillary Clinton faced sexism in 2016, "that's not going to happen with me." It would be particularly ironic if he were the one to benefit from all of this, although that might please the major donors and middle-road centrists who aren't comfortable with either Sanders or Warren.

In the meantime, I hope that this can open up a larger discussion about how women are subtly discouraged, often by people who think of themselves as well-meaning, from having greater ambitions, and how that discouragement can help contribute to women's inequality.

For instance, research shows the main reason that there are far fewer women holding public office than men is that fewer women run for office in the first place. This drip-drip-drip of "concerns" from people in your life telling you that a woman can't make it gets into women's heads and they quit before they've even tried. The worst part is that the "concerns" are overblown. Of course women face sexism when they run for office, but in the end, they are just as likely as men to win.

The reality is that if women wait until the public is "ready" for women to run for higher office, direct Hollywood films or otherwise grab for the kind of power men have typically hoarded for themselves, then women will wait forever. Sexism isn't like the common cold, where if we just rest up and sip some chicken soup, it will pass in due time. Sexist attitudes are changed because people go out there and change them. The public will become ready to have women in power the same way they became ready for the first black president: Because someone runs for the office and wins. Warren, unlike Barack Obama, has the advantage of having someone who paved the way ahead of her. As Bernie Sanders reminded us in his response to all this, Clinton won nearly 3 million more votes than Donald Trump in 2016.

There's a chance here to have a productive conversation about what's really holding women back and how to fight it. It just requires everyone to simmer down a bit. Sanders fans need to admit that their man, being human, could have said something blinkered and self-serving. Warren fans need to admit that whatever Sanders' blind spots and graceless comments may be, he's got a long track record of support for feminist policies. And everyone needs to admit they can vote for their preferred candidate without proclaiming that every other candidates is the devil.