Sanders sticks by claim that he never said a woman couldn't win; Warren tries to rise above the entire debate 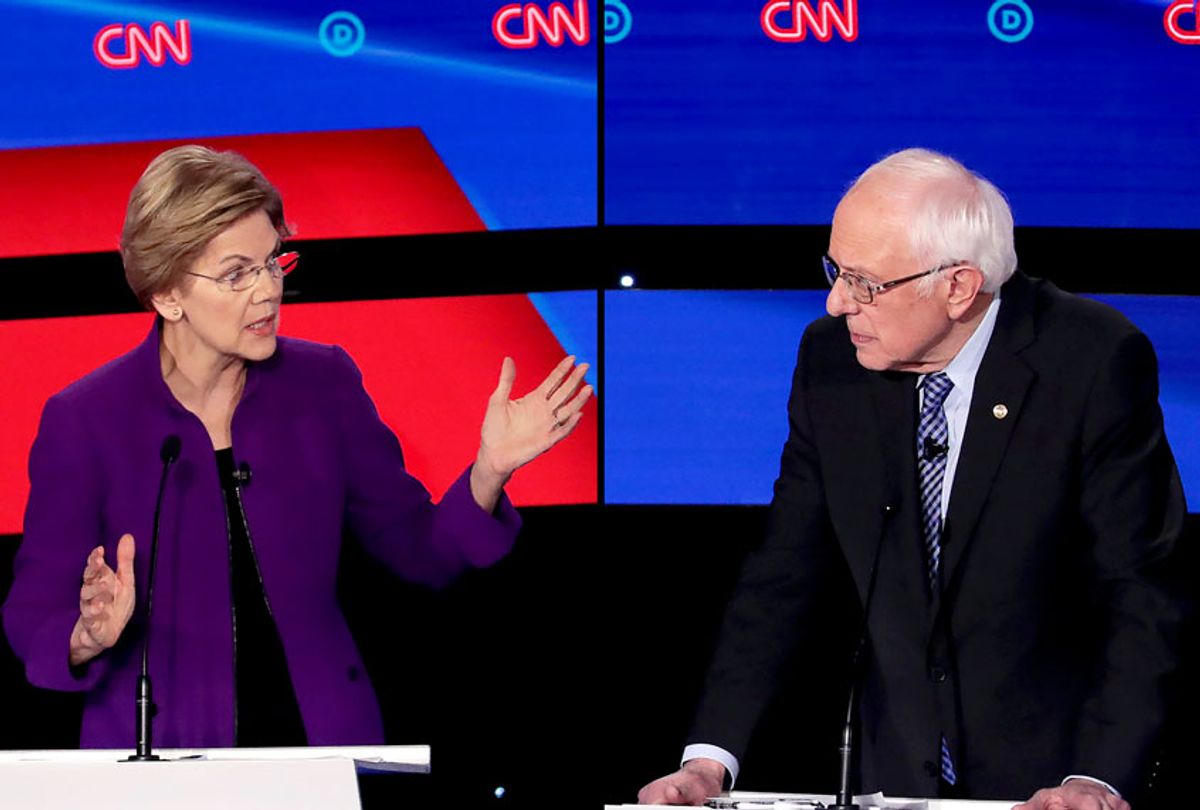 Things were tense going into the last debate before the Iowa caucuses, hosted by CNN and the Des Moines Register at Drake University in Des Moines. After days of the mainstream media trying to hype stories about Sen. Elizabeth Warren of Massachussetts and Sen. Bernie Sanders of Vermont supposedly turning on each other after a largely friendly competition, one story finally had legs: A claim, which Warren reluctantly supported, that Sanders had told her in 2018 that a woman couldn't win the 2020 presidential election.

But while many in the media got excited at the prospect of an intra-party culture war, the Warren campaign clearly wasn't keen on the idea, as evidenced by screenshots from an online chat in a Warren group showing campaign staff telling Warren supporters "our goal is de-escalation and focusing on our shared goals" and asking them not to call Sanders "sexist."

With so much going on in America politics — a close call with war in Iran, the looming impeachment trial — this tiff between friendly politicians over an ultimately inconsequential bit of mansplaining seems like a farcical joke. But gender issues and whether women — the majority of voters — will ever get fair representation has been a raw nerve since a semi-literate sexual predator managed to defeat a meticulously qualified Hillary Clinton in 2016. So it's not surprising CNN thought they could drum up some drama over it.

Debate moderators did hold off for a full 44 minutes before digging in, focusing on questions about military conflicts in the Middle East — whatever the minor differences between Democratic candidates, any of them would be better than Donald Trump — and a more interesting debate on trade policy, which may be dry but also is incredibly important to Iowa voters.

After that throat-clearing, however, it was time for the dramatics. First, Sanders was asked about reports that he told Warren a woman couldn't be elected in our sexist environment. Sanders had multiple off-ramps that would make this entire tiresome debate go away: Apologize without caveats. Suggest that it was a miscommunication, and apologize for that. Anything but dig his heels into the previous claim that the reports were a lie, which makes it sound like he's gaslighting a woman he claims as a friend, and who has already made it clear that she is not actually mad about a relatively minor incident.

Instead, Sanders tore those heels in like he was wearing stilettos and walking in mud.

"As a matter of fact, I didn't say it," he said, adding, "How could anybody believe a woman can't win the presidency?"

At this point, everyone Democratic voter who has had a discussion with other Democratic voters about the 2020 election is being gaslit, since everyone — misogynists, radical feminists, moderate feminists, people who think unwanted groping is bad except when Al Franken does it, people who think unwanted groping is always bad — has heard, uttered or participated in a worried debate over whether the country is ready to elect a woman. Not only can we believe that a woman can't win — we're terrified that it's true.

At this point, moderator Abby Phillips turned to Warren, and flatly said, "Senator Warren, how did it make you feel when Bernie said a woman couldn't win this election?"

That was funny, and it gave Warren an opportunity to rise above this debate over whether or not she is lying (which, again, is a tired trope against women, especially when they're reporting such a mundane and minor incident that should have been inconsequential, but for the over-the-top defensiveness about it). Instead, she gave a robust defense of the idea that a woman can win, a question that is clearly on the mind of most, if not all, Democratic voters.

"The men on this stage collectively have lost 10 elections," she said. "The only people on this stage who have won every single election that they've been in are the women."

"Since Donald Trump was elected, women candidates have outperformed men candidates in competitive races," she added, noting that people were skeptical in the past that Roman Catholics and African Americans could win a presidential election — until John F. Kennedy and Barack Obama did so.

From my perspective, Warren came out of that exchange looking great, and Sanders looked petty and egotistical. But of course this entire debate is roiling the Democratic Party because no one trusts that their opinion is shared by the voters the party needs to get a candidate across the finish line against Trump in November.

After all, it also seemed obvious to me that, with eight women accusing Sen. Al Franken of groping them, by far the likeliest explanation was that Franken is a serial groper. But, as the ugly public response any woman gets for making this common-sense point makes clear, a lot of people are deeply invested in the idea that women just love lying about men, apparently because women also enjoy being yelled at and shunned by people who would rather believe their male heroes are perfect.

So who knows? Warren is using this entire story as an opportunity to make her electability pitch. Sanders, for whatever reason, is providing grist to his ugliest supporters who are overly eager to flog the misogynist stereotype of the mendacious woman. I wish I could say who I think will benefit more from this divide, but who knows how much sexism still lingers in the Democratic voting base?

The worst part is, as writer Jessica Valenti noted on Twitter, this is all going on in a country where the sitting president has been credibly accused of rape and has bragged, on tape, about sexual assault.

The rest of the debate went over the same points that have been well-covered in previous debates: Endless and pointless debates over which health care plan candidates support (that Republicans will never allow to pass), the impeachment of Trump, tax policy, climate change.

Mayor Pete Buttigieg made absolutely sure that you know he served in Afghanistan. Sen. Amy Klobuchar of Minnesota reminded voters that she is not very tall but she is still very confident. Former Vice President Joe Biden continued to insist that being very old just means being very experienced. Billionaire Tom Steyer repeated talking points he picked up from Ted Talks.

But the debate was definitely overshadowed by this struggle between Warren and Sanders. What that means for the other candidates is hard to say. On one hand, they may benefit from being outside a controversy that is making many Democratic voters feel ill. On the other hand, they were so overshadowed that they struggled to make an impression. In a close four-way race — which is what Iowa looks like right now, with Biden, Buttigieg, Sanders and Warren tightly packed in the polls — there's no way to predict how this kind of chaotic, last minute altercation could change the landscape.