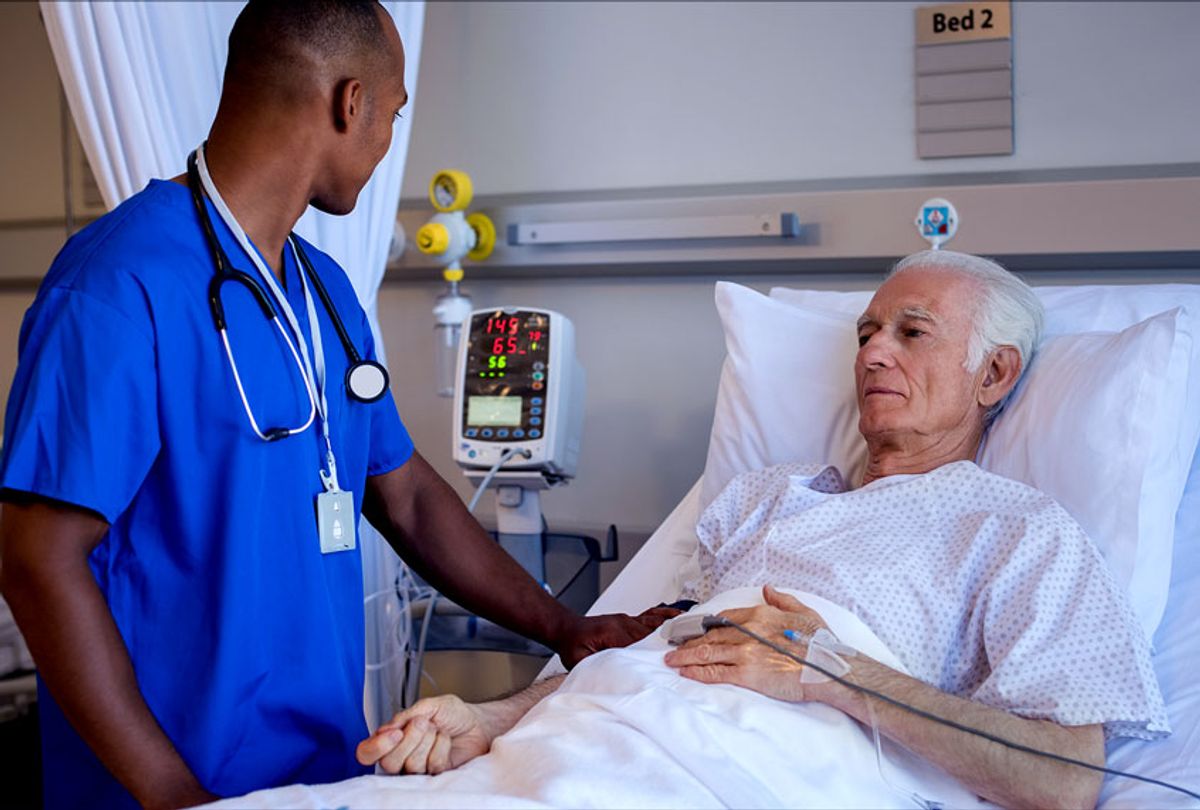 In a nation in which a one-day hospital visit can cost tens of thousands of dollars, health insurance is hundreds of dollars a month, and a cardio workout class runs in the $40 range, perhaps it is no surprise that the rich are at an advantage when it comes to having better health. Previous research has shown that money matters when it comes to living a longer life in America, but a new study found it affects your quality of life at the end of your life, too.

The research, published in the Journal of Gerontology, took data from 10,754 and 14,803 adults 50 and older from the English Longitudinal Study of Ageing and the US Health and Retirement Study. The study's goal was to better understand how socioeconomic factors affect a one's person's quality of life as they age. People from both cohorts were put in three groups based on the total household wealth determined by the sum of net financial wealth and net housing wealth, minus all debts.

The researchers found that the biggest socioeconomic factor in predicting when those problems began was how much money the person had. At 50, the wealthiest men could have as many as 31 years of a healthier life before experiencing a decline. For those who had less wealth, they could expect only another 22 years of a healthy life. The disparity for wealthy women was similar. Wealthier women were expected to have 33 more years of good health at age 50, compared to poorer women who could expect only 24 more years.

"While life expectancy is a useful indicator of health, the quality of life as we get older is also crucial," Dr. Paola Zaninotto, who is a lead author of the paper and a lecturer at the University College London, said in a press statement. "By measuring healthy life expectancy we can get an estimate of the number of years of life spent in favourable states of health or without disability."

Researchers said they hope that this contribution to the growing literature about income inequality and quality of life motivates policymakers to make health care accessible to everyone.

"We know that improving both the quality and the quantity of years that individuals are expected to live has implications for public expenditure on health, income, long-term care of older people and work participation and our results suggest that policy makers in both England and the US must make greater efforts into reducing health inequalities," Zaninotto said. "Our study makes a unique contribution to understanding the levels of inequalities in health expectancies between England and the US where health care systems are very different."

"Lack of health insurance among those aged below 65 years does not only affect prevention and early diagnosis, but also access to appropriate medical intervention when serious illness strikes and the ability to pay for other needs, such as adequate housing and food," the authors state in the paper. "Furthermore, since access to health care is not the only explanation for inequalities in health, cross-national comparisons of health expectancy can also help evaluating strategies adopted in different countries to help reducing health inequalities."

According to a recent Gallup Poll, Americans often choose to put off treatment for serious medical conditions because of the anticipated cost.

This is all to say that good health doesn't just affect individuals, but society as a whole. Indeed, there are social repercussions to a nation-state's health care system.

The United States, like many western liberal democracies, is purported to exhibit a generational divide between older, more conservative people, and younger liberals. Yet research has previously shown that such a divide has less to do with age and more to do with health care (or lack thereof). Since those with a lower socioeconomic status are more likely to get sicker and die early, they are less likely to be shaping American politics; which is why we have a stereotype of right-leaning seniors, as the wealthy — and thus more likely to lean right — merely live longer.