At the 7th Democratic debate, candidates took every opportunity to talk climate 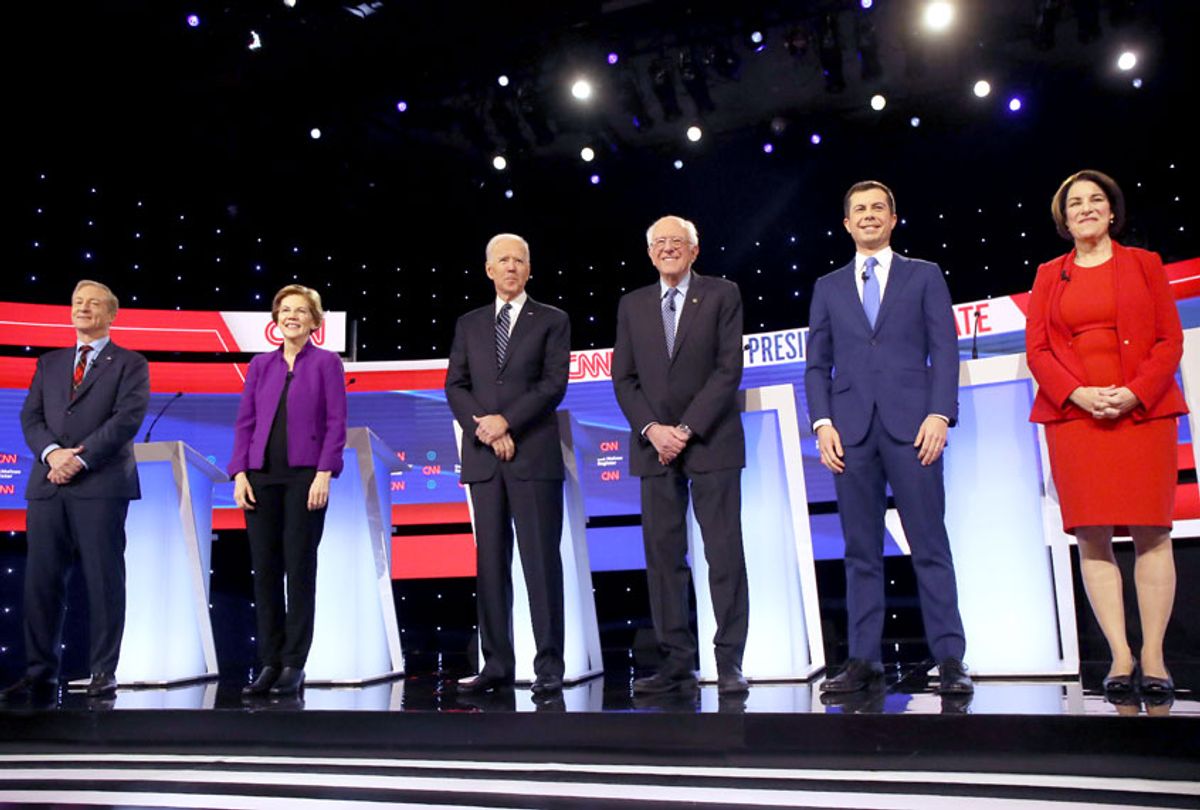 The past six debates have been a mixed bag when it comes to rising temperatures — some were surprisingly heavy on climate talk, others impossibly light. The last debate hosted by CNN, back in October, contained exactly zero questions about climate. But this time around, CNN got its act together, with a solid chunk of climate discussion in the final half hour of the debate.

Debate moderators may take ages to get around to climate change in these debates, but the candidates have gotten increasingly adept at weaving the issue into their answers to other questions. This time around, Wolf Blitzer, Abby Phillip, and the Register's Brianne Pfannenstiel could barely keep a lid on the climate action in the first half of the debate. At one point, Pfannenstiel tried to get Sanders to stay on topic. "We're gonna get to climate change but I want to stay on trade," she said. "They are the same issue," Sanders shot back.

Right off the bat, Buttigieg and Warren touched on the importance of accounting for the impacts of climate change on national security in response to the moderators' first round of questions, which were about the candidates' fitness as commander-in-chief. But things really started heating up when Steyer, the billionaire climate activist, fielded a question about Iran by pivoting to the mega-fires still burning in Australia right now. "There is a gigantic climate issue in Australia which also requires the same kind of value-driven coalition-building that we actually should be using in the Middle East," he said.

Bernie Sanders, in response to a question about Trump's new trade deal with Mexico and Canada, blasted the agreement for not being climate-friendly. "Every major environmental organization has said no to this new trade agreement, because it does not even have the phrase 'climate change' in it," he said. "I will not vote for a trade agreement that does not incorporate very strong principles to significantly lower fossil fuel emissions in the world."

A couple of minutes later, during the same section on trade, Buttigieg — the only candidate who will likely still be alive when the worst effects of warming kick in — jumped into the climate fray. "What I've noticed is pretty much all of us propose we move on from fossil fuels by the middle of the century," he said. "The question is, how are we gonna make sure any of this actually gets done?" The former South Bend mayor (his term ended on New Year's Day), recently came out with a green infrastructure plan that aims to invest in the nation's roads, bridges, and tunnels while simultaneously making them more climate-resilient.

When the moderators did finally get around to asking some questions about climate change during the last quarter of the debate, the candidates were ready. But not all of them were successful in relaying their environmental expertise.

The moderators started by asking Buttigieg how he would protect farmers and factories in Iowa during natural disasters. His answer was light on specifics. Displacement "disproportionately happens to black and brown Americans, which is why equity and environmental justice have to be at the core of our climate plan," he said. Asked why she doesn't support a ban on fracking, Klobuchar pointed out that methane emissions from natural gas pose a growing threat to the planet but, in the same breath, said natural gas is an important "transition fuel" for achieving a renewable economy. That didn't go over well with climate activists.

Steyer showed off his climate vocabulary, correctly noting that the question about protecting farmers was really about managed retreat. He added, "I'm still shocked that I'm the only candidate who will say this: I would declare a climate emergency on day one." But his moment in the sun was cut short when Pfannenstiel asked him to defend his past investments in oil, gas, and coal. Steyer responded that he opted to divest from fossil fuels more than a decade ago after grasping the severity of the crisis.

Warren, who is nothing if not consistent, said tackling corruption is the first step in addressing rising temperatures. "Climate change threatens every living thing on this planet, and the urgency of this moment cannot be overstated," she said. Biden, who spoke next, tried to establish himself as the O.G. climate advocate. "Back in 1996 I introduced the first climate change bill and — check Politifact: They said it was a game changer," he said. But then another O.G. climate advocate got his moment.

"We have got to take on the fossil fuel industry and all of their lies and tell them their short-term profits are not more important than the future of this planet. That's what the Green New Deal does," Sanders said, making a plug for his $16 trillion climate proposal. The Vermont Senator recently nabbed an endorsementfrom the Sunrise Movement, a climate activist group that has been successful in pushing high-profile Democrats to embrace progressive climate policies.

In all, the portion of the debate devoted to climate change spanned about 10 minutes. But that total rises when you take into account all the moments that candidates brought up climate during the rest of the debate. If Tuesday night was any indication, the next 73 debates will be chock full of climate nuance.