"Just Mercy": Freeing an innocent man shouldn't be this hard

Walter McMillian was eventually cleared of false murder charges, but he could easily have stayed in jail forever 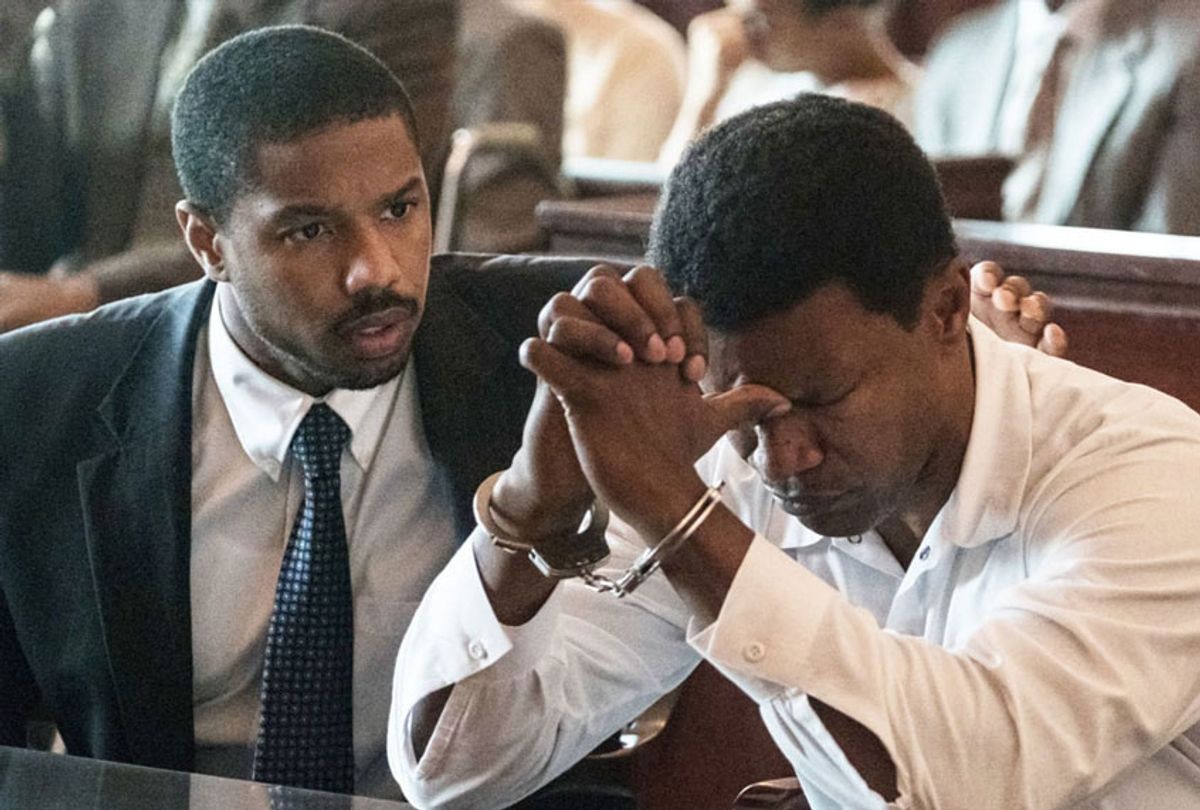 Destin Daniel Cretton's film "Just Mercy" gives a rare glimpse into how messed up our criminal justice system really is.

Stevenson brilliantly documents this journey in his bestselling book of the same name, which many fans, including myself, feel should have been adapted to film a long time ago. But that is Stevenson; s you get to know him in the film or book, you'll notice that he's fully committed to the work and makes almost no reference to his personal life. You begin to feel that his work is his life: It's extremely demanding, couldn't be more urgent, and leaves little time for many of the extras that most of us deem relevant. Like a doctor, Stevenson's work saves lives.

The film is centered around one of Stevenson's most notable clients, Walter "Johnny D" McMillian (played by Jamie Foxx), an Alabama small business owner who was charged with murdering a white woman named Ronda Morrison. But this was based on evidence fabricated by white police officers who coerced a white criminal, Ralph Bernard Myers, to make up a story. As a result, McMillian was found guilty by an all-white jury and sentenced to death by a white judge.

The fact that no real evidence tying McMillian to the murder existed didn't matter, or that the key witness was a criminal trying to cut a deal, or that his truck, that was supposedly spotted at the murder seen was in the shop having the transmission worked on or that many of McMillan's family and friends, (even a police officer) were with him during the time of the murder didn't matter. What mattered? The fact that McMillan had an affair with a white woman was enough for these racists to label him murderer and end his life.  Like many in that situation would do, McMillian lost all hope. Unlike many in that situation, McMillan was granted a second chance at life, and how that happened is the most interesting part of the film.

The "Just Mercy" backstory and trailer clearly shows us that racism is a character in the film. We see or hear that Stevenson is a black man fighting for justice and racial equality in Alabama and think, wow, this guy must love pain. And then eventually knowing that Stevenson's work freed a black man who was convicted of killing a white woman in the south, slightly injects some faith into our historically flawed system. But should it? Seeing Stevenson fight for McMillian on film and winning the battle should be inspiring; however, it depressed me because McMillian's freedom was a miracle, an accident, or a combination of both.

Walter McMillian's chances of becoming free were weaker than a house of cards next to an open window on a windy day.  There were a number of impossible factors that all had to work in his favor that ultimately granted his freedom. These included:

The McMillian family: Walter McMillian had a family of believers. I have plenty of friends who are sentenced 10 or 20 years in jail and they feel doomed as soon as the judge slams the gavel. The visits normally stop after the first year, and the letters after the second. Pretty soon, they feel like they have they nothing to come home to and many start acting as such after losing those ties.

McMillian was mainly incarcerated because of an extramarital affair–– giving his wife every reason to split, but she didn't. She supported him and worked with Stevenson, playing a role that was pivotal in achieving McMillian's freedom.

Bryan Stevenson: Obviously Stevenson is the MVP.  He never quit. McMillian had a paid lawyer prior to Stevenson, who sucked all of his family's resources so there was no money left to pay another attorney. Stevenson was able to represent him for free, and for that, Stevenson received the cold shoulder from everyone in town, threats to his life, police harassment, and flat out hate that would make any lawyer quit, but he didn't. He saw McMillian as a person who was innocent and deserved to be free –– something that many paid lawyers fail to do. If McMillian was still incarcerated in 2020 (he passed in 2013), I believe Stevenson would still be filing appeals. His work ethic was relentless; at the time he had already appealed over 100 cases for inmates on death row.

Ralph Bernard Myers: Myers had a change of heart. For a reason beyond me, Myers developed a conscious and realized the pain his lie caused the McMillian family. He was facing the death penalty and offered a chance to exchange that for 30 years if he lied against McMillian. Those lies tortured him to the point where he recanted his statement. Myers reversing his confession wasn't enough to gain McMillian freedom; however, it garnered the attention needed for Stevenson to continue the fight and bring more attention to the case.

"60 Minutes":  Before going viral was a thing, McMillian's case kind of went viral. Stevenson's collection of evidence, statements from family and friends, Myers' new testimony, and his growing reputation made for good television. Stevenson was able to compile all of that information and get "60 Minutes" to run a feature story.

That "60 Minutes" feature brought the kind of national attention needed to highlight the racist people involved in McMillian's convection, the racist system McMillian had to go up against, and showed how trash the justice system in Monroeville, Alabama is.

If Myers had stayed silent, or Stevenson was a quitter or motivated by money, or if "60 Minutes" decided to run a different story, McMillian would have died in prison like so many other innocent people trapped in the system right now. Justice in America isn't black and white or by the book or even based on case law–– it's about money, attention and opportunity–– if you don't have two out of three, you can easily rot in jail for a crime you did not commit, and no one will care.

A long time ago, Stevenson said, "You are better off being rich and guilty than being poor and innocent."