The International Longshore and Warehouse Union is facing an existential crisis. 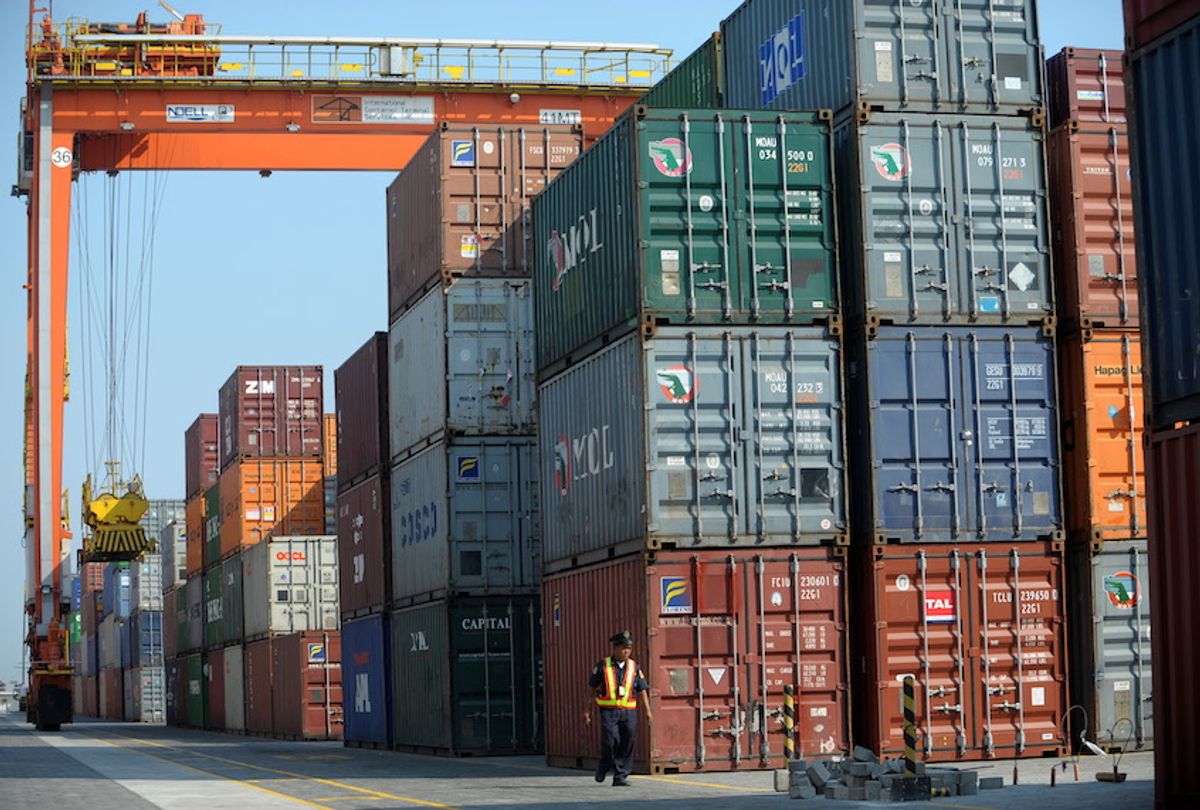 This photo taken on April 18, 2011, shows a security personnel walking past shipping containers at the International Container Terminal Services Incorporated (ICTSI) at a port in Manila. (Noel Celis/AFP via Getty)
--

The International Longshore and Warehouse Union (ILWU) is facing an existential crisis.

Founded by the militant labor icon Harry Bridges, the ILWU has made a name for itself as the take-no-crap West Coast dockers union, one that has engaged in work stoppages and other tactics both to protect their jobs and benefits, but also to oppose war and racism.

A federal jury in Portland, Oregon granted a $93.6 million penalty in November against the union to the American subsidiary of the Philippines-based International Container Terminal Services (ICTSI), which formerly operated the Portland terminal. The back story is a complicated one about union jurisdiction. In 2012, the local ILWU began a series of work slowdowns over two jobs that involved handling refrigerated containers (as well as electrical equipment related to those containers) that the union believed were wrongly being put outside of the ILWU's collective bargaining agreement. Instead, these two port jobs were represented by the International Brotherhood of Electrical Workers (IBEW). ICTSI sued the ILWU, claiming the industrial action was an illegal secondary boycott and that years of battling the union had taken financial toil on the company. The jury sided with ICTSI.

While officials say that this would not be the end of the union necessarily, the restructuring of the union would likely cramp its ability to administer the business of representing and organizing workers. The union's president, Willie Adams, said in a message in the union's newspaper, the Dispatcher, "We're hoping that the Court will review the verdict and explore a different outcome — one that is more fair and consistent with the evidence. If that doesn't happen, there's a possibility that we may seek protection in federal court to re-organize our finances under protections allowed by the federal bankruptcy court. While nobody wants to take this step, it may be the best way to protect the ILWU and to allow us to return to sound financial footing as quickly as possible."

For maritime unionists, the involvement of ICTSI in this case raises eyebrows. It is one of the most notorious ports operator in the market, a company that profits off of war, misery and labor exploitation. The news that ICTSI would seek to destroy a union is in line with its troubling global track record of undermining workers' rights — and exploiting low wages and poor working conditions to protect its profits.

The company brings a global track record mired in accusations of labor abuses. Starting in 2017, the International Transport Workers Federation, the global alliance of transport unions, intervened in what it called a severe undercutting of labor standards by ICTSI, the operator at the Port of Tanjung Priok, in the Indonesian capital of Jakarta. Specifically, union activists alleged that the ICTSI-run terminal was paying workers 15% less than other nearby port operators. The International Transport Workers Federation (ITF) also alleged that the company had broken Indonesian labor law by continuing to outsource labor, against the government's orders, and avoiding issuing overtime pay. As one Indonesian labor leader, Didik Noryanto, said at the time, "Workers at the ICTSI port are looking to the Indonesian Government to show leadership and step in to defend these workers' basic human rights because ICTSI is waging an aggressive campaign to drive down their wages and conditions."

These concerns led to the Maritime Union of Australia leading a several-week-long blockade in late 2017 of the Port of Melbourne's terminals, run by the ICTSI, specifically on grounds that a firm with such a bad reputation within the ITF had no business in Australia. Paddy Crumlin, the IFT's chief dockers official, said at the time, "Everyone is awake to ICTSI's destructive ways and won't cop it anymore."

Crumlin described ICTSI's rogue labor record as a "cancer" spreading around the world. Indeed, that same year, the Guardian uncovered union busting and low wages at Madagascar's main port, also run by ICTSI. This drama, once again, made its way back to Australia, where ICTSI was looking to increase its presence. In 2018, the ITF demanded an investigation of the company after it was awarded the Webb Dock terminal at the Port of Melbourne. The ITF also raised concerns about the firm's anti-union practices in Madagascar with ICTSI shareholders, urging them to vote out two board members for failing to reign in the company's operations in places like Madagascar, where, according the trade journal Maritime Executive, ITF "said that hauler strikes and protests have led to delays, with some vessels reportedly anchored and unable to berth for weeks."

Razon is one of the richest people in the Philippines with a net worth estimated over $5 billion and is a scion of the ports industry. His grandfather came from Spain to Manila to establish its primary port. From there, Razon has built his shipping fortune—and notoriety—primarily by swooping into countries that are so undesirable from a human rights standpoint that he wouldn't have to go into bidding wars with rivals and create a near monopoly for himself. He told investors in 2015: "I'm very bullish about Iran, Congo and Cambodia… It's okay to say that if you make investments in bad places right now, over time, you'll gain without competition."

And Razon particularly likes setting up shop in sub-Saharan Africa, where  he's faced accusations of union busting in Madagascar. Razon specifically highlighted that the desperation for infrastructure means he can charge higher fees. He told the Wall Street Journal in 2014, "Bottom line: Returns are best there with high yields in the handling business. To handle a box in our terminal in Yantai, [China], we charge about $45-$50. The same container in Africa easily goes for $200-$250."

Crumlin put it crudely in a statement released August 2018: "[It is a] business model of deliberately prioritizing countries where human and labor rights are most at vulnerable and by partnering with some of the worst anti-democratic regimes implicated in crimes against humanity."

But perhaps ICTSI's most intriguing operations have been in the Democratic Republic of Congo. With relatively poor rail and paved transport infrastructure, the Congo River is the major highway for goods in the second largest country in Africa in terms of area. This past December, the company announced that it would spend $100 million to double container capacity at its port operations in Matadi, where it has controlling stake in the port company. Ten percent of that company is the state-owned Société Congolaise des Transports et des Ports. For the ITF, this means that ICTSI isn't simply trading with a corrupt regime, but is inextricably linked to the regime of President Joseph Kabila, which the federation calls on its website ICTSI Exposed, "one of the world's worst kleptocracies."

Today, Razon's business empire includes casinos, a venture he has jokingly called his night job, but the gaming side of his operations is no less sordid. In 2016, cyber thieves made off with $81 million from the central bank of Bangladesh's American account at the Federal Reserve Bank of New York, with $29 million winding up in an account for Solaire, one Razon's gaming subsidiaries. Razon insisted that the scandal did little damage to his business' reputation.

Australian labor's resistance to ICTSI operating ports was based on the fear that the company—seeking to expand its presence around the globe—would drive down standards for the country's port workers. Australian unions had a right to be worried: Economic liberalization has led to a decline in union bargaining power in Australia, and union membership is declining. In fact, the MUA faced a crippling lawsuit, similar to the one the ILWU is facing, regarding a work stoppage involving Chevron cargo, and the MUA ended up merging with another union.

ICTSI is no longer operating at the Portland terminal. But its existence there, unless the judge in the ILWU case decides to rehear the matter or grant some sort of appeal, will forever leave a stamp in American maritime unionism and rattle the transport labor movement worldwide.

It should be noted, however, that ILWU's campaign at the Portland terminal may be considered ill-advised. The dispute in Portland stemmed from the fact that the jobs in question related to electrical operation of refrigerated containers. Thus, the International Brotherhood of Electrical Workers claimed, the jobs rightly belonged to the IBEW. ICTSI had made the argument that as the port operator, the ILWU's targeting of ICTSI in what was ultimately a dispute over union jurisdiction was a secondary boycott. Was it really the best use of the ILWU's time and energy to fight over a few workers who were likely going to end up with some sort of union representation? In hindsight, it certainly was not.

It isn't clear if ICTSI-related companies have any port operations in the United States or plan to compete for opportunities at U.S. ports anytime soon — the company did not respond to a request for comment. What is clear from this debacle is that employers are ready and willing to use the secondary boycott ban against transport unions to the extent that it could cripple unions' operations. Employers have happily embraced the jury award, saying that it puts the union — and rank-and-file port workers — on notice.

"It hearkens back to the Gilded Age when corporations used employer friendly courts to bankrupt and destroy unions," said James Gregory, a labor historian at the University of Washington. "More important, it threatens the existence of a union that has long been a model of progressive politics and democratic governance, a union that fights for labor rights worldwide, a union that has beaten back every challenge since 1934. And if the courts are again going to issue rulings bankrupting unions, no union is safe, nor are the workplace rights that all of us — union and no union — rely upon."