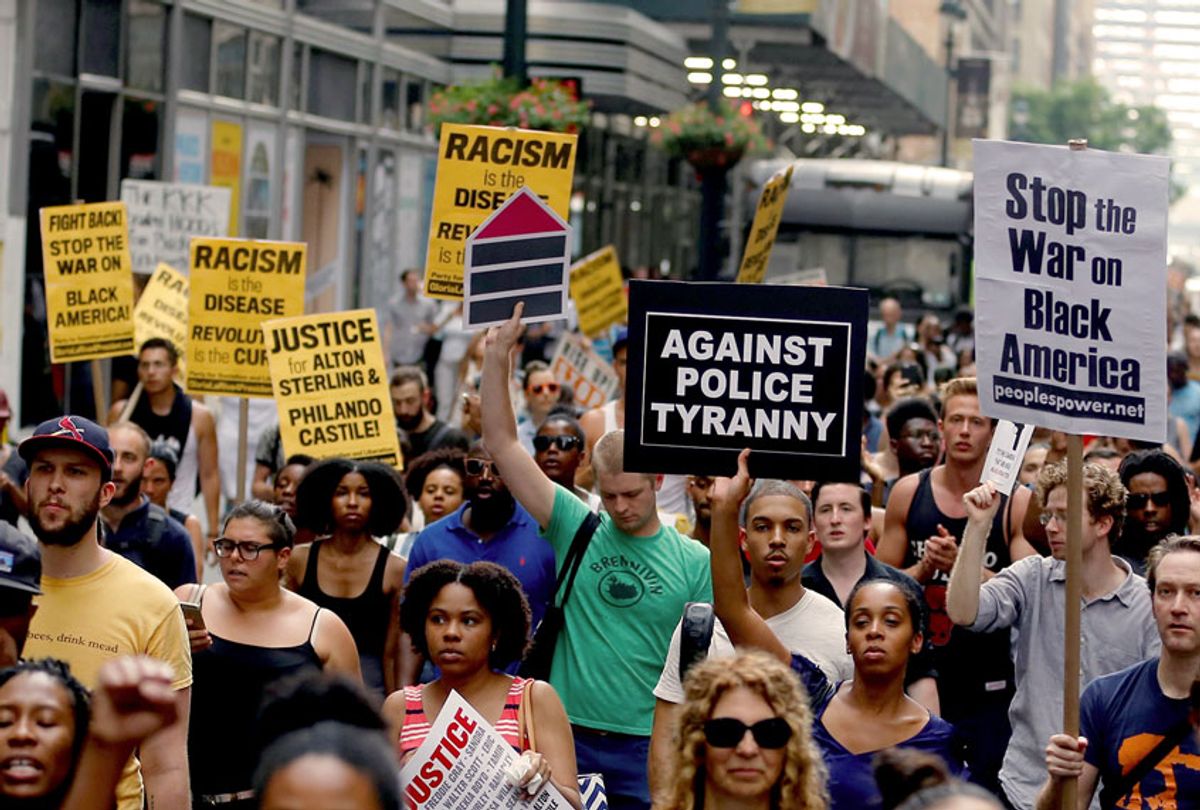 People hold banners and chant slogans as they march from Union Square Park to Grand Central to protest the killing of 3 black men by police in 48 hours, in Manhattan, New York on July 7, 2016. (Volkan Furuncu/Anadolu Agency/Getty Images)
--

Over 50 years ago the Rev. Dr. Martin Luther King Jr. was assassinated for daring to fight for an America that placed justice at the center and saw the humanity in every man, woman and child. Five decades later, America has time and again failed to live up to these ideals and Dr. King's vision remains incomplete, especially when it comes to our justice system. That's why Fair and Just Prosecution and the Campaign for the Fair Sentencing of Youth brought two dozen elected reform-minded prosecutors and 20 leaders from the Incarcerated Children's Advocacy Network (ICAN) together last year to walk in Dr. King's footsteps. ICAN's network includes individuals sentenced to lengthy prison terms as children but now back in our communities leading productive lives. Together, we explored the history of racial oppression in America and saw the need to reckon with our nation's painful legacy of white supremacy and racial violence if we are to forge a new pathway forward.

America leads the world in incarceration, locks adults and children in often inhumane and dangerous conditions, and is the only country that sentences children to life without the possibility of parole. Much of the weight of this system continues to fall upon black men, women and children.

At the Equal Justice Initiative's Legacy Museum and National Memorial for Peace and Justice we learned about the reality of slavery and racial terrorism in America. We walked across the historic Edmund Pettus Bridge in Selma, where on "Bloody Sunday" law enforcement officers brutally attacked unarmed civil rights protesters. As our group arrived at the exact spot where brave advocates had once looked down at officers waiting to attack them, our group locked arms and spontaneously broke out into a verse of "Lift Every Voice and Sing" – reclaiming this historic site where the justice system fundamentally failed as one now marked by a new era of leaders vowing to do better. It was a powerful reminder that racial oppression in America has not ended, but also a moment of hope that we can create real change when joined together.

While it has been 156 years since the Emancipation Proclamation and decades since lynchings took place in town squares, the terrorization of black people continues. It has morphed into over-policing, unequal justice too often based on race and wealth, and a never-ending pipeline that pushes far too many, starting far too young, and for far too long, into our prisons and jails. Many ICAN members were tried in the adult system and at 14, 15, or 16 years of age were sentenced to life terms before they'd learned to drive, had a job, or we were old enough to vote. This epitomizes our broken system – and an approach to young people that renders us an international outlier.

Fortunately, communities understand this is not what justice looks like and are coming together with a growing number of elected prosecutors redefining their role in the 21st century.

Too often those who commit criminal offenses are cast as malicious villains, creating an environment that locks away children for life without a second thought. This narrative – centuries in the making – is built upon a telling of history that neglects how policies like Black Codes restricted the movement of freed black Americans. It also reinforces the debunked and racist super-predator theory of the 1990s that landed too many black youth in prison and perpetuates the idea that the economic and social conditions of black people (and cycles of incarceration that far too many have been subjected to) are due to their own lack of will rather than systems intentionally designed to control or marginalize them.

A deep and honest look at who we have been, and still are, as a country is required before we can emerge as the country we want to be. That begins with reform led by those most deeply impacted and prosecutors willing to acknowledge the shameful role of their predecessors in perpetuating past atrocities. Looking back at these actions is part of interrogating how insidious and powerful perceptions of black criminality play out in prosecutors' offices and throughout the criminal justice system today.

Today, we have an opportunity to make progress in fulfilling Dr. King's promise of America. Prosecutors can rally against criminalizing children, partner with ICAN members to understand the consequences of youth incarceration, and advocate for practices that keep young people out of the adult criminal justice system. They can choose to treat, rather than criminalize, manifestations of trauma and substance use disorder, and embrace second chances rather than forever define individuals by their worst mistakes. And, they can revisit decades-long sentences and adopt practices to address racially disparate outcomes.

We can – and we must – learn from the mistakes of our past and move in a new direction, one with justice and humanity at its center. We owe that much to Dr. King's legacy and to our nation's future.

Marshan Allen is a member of the Incarcerated Children's Advocacy Network (ICAN), a project of the Campaign for the Fair Sentencing of Youth (CFSY), where he sits on the board. Marshan is also a Policy Director at Restore Justice Foundation, an organization focused on criminal justice reform in Illinois.

Miriam Aroni Krinsky is a former federal prosecutor and the executive director of Fair and Just Prosecution, a national network of elected prosecutors working towards common-sense, compassionate criminal justice reforms.