America has remade Dr. King as a Disney character — a peaceful lamb who just wanted us to love each other 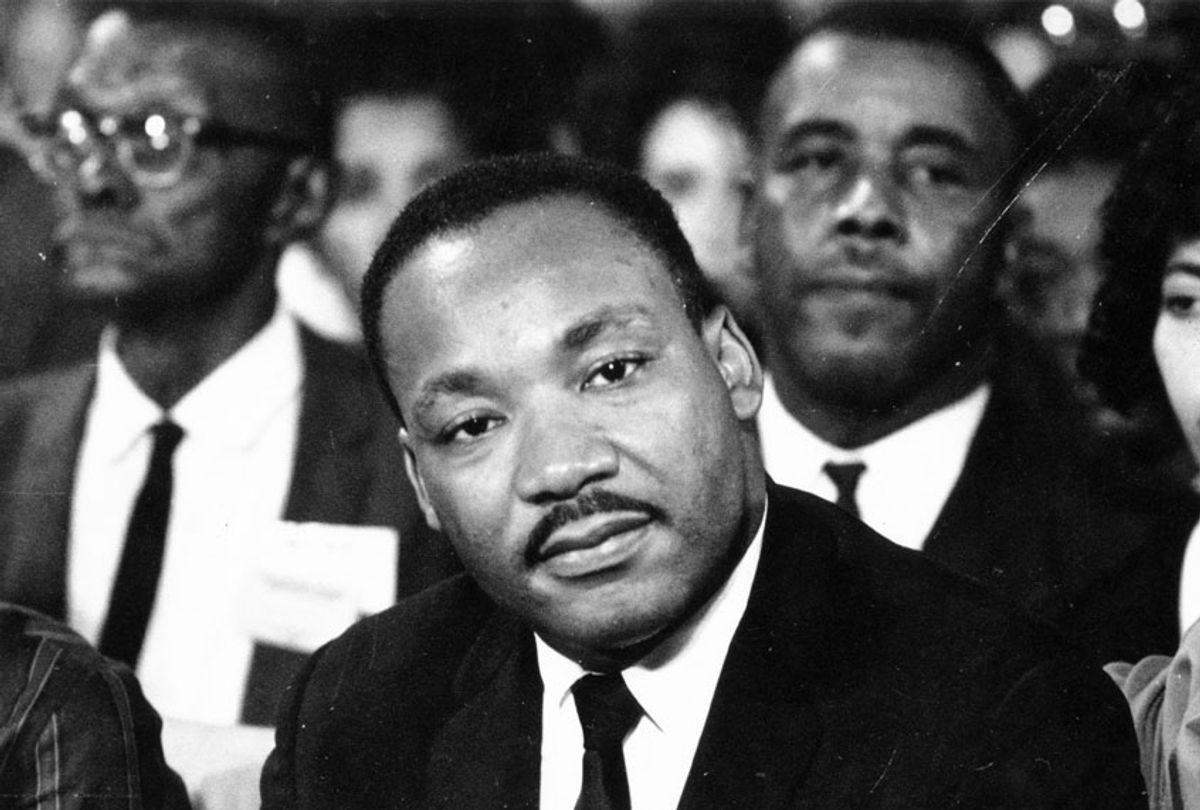 During the upcoming MLK celebrations we will see outpourings of gratitude for his work to bring about racial healing to the nation. In these celebrations, leaders from different religions, races and ideologies will speak of their adoration of King. In doing so, many will co-opt Dr. King's legacy by turning him into a peaceful lamb willing to be sacrificed for the nation, instead of portraying him as he was: a fiery preacher who demanded the nation treat its diseased soul. This reimagining of King undercuts contemporary black demands for justice.

This omission of his anger and frustration will not be the first time Dr. King has been transformed into a meek southern preacher who just wanted us to love each other. Essentially, he has become a Disney character; the only thing missing is the musical numbers.

In the wake of protests and riots regarding the unchecked aggression of police forces toward black citizens, black and white commentators such as CNN's Wolf Blitzer and Don Lemon tried to shame the participants by pulling the "King" card. In their condemnation of these activities they ask, "What would Dr. King say?" They forget what Dr. King has already said: that riots are "the language of the unheard."

In the 50 years since his assassination, we have sanitized King and the civil rights movement to make both easier for public consumption. A 2018 CBS news poll found that 28% of Americans would like to have coffee with Dr. King, second only to the 31% who chose George Washington. The poll also found 80% of Americans indicated Dr. King was a very important figure in American history. However, amid their praising Dr. King and his activism 50 years ago, Americans are uneasy about contemporary Black activists. In a June 2015 PRRI/RNS poll, 63% of Americans agreed with the statement "When Americans speak up and protest unfair treatment by the government it always makes our country better." However, when the statement was changed to "Black American" protesters, 54% agreed. This statistically significant drop in support is driven primarily by white, Republican and white evangelical responders. Two-thirds of white responders agreed when the protesters are American, while 48% agreed when they are black. Among Republicans, the split is 61% and 43%; among white evangelicals, it is 64% and 37%.

We forget that the same language blacks and whites use to describe Blacks Lives Matter advocates — troublemaker, unpatriotic, communist, danger to society — was also applied to Dr. King and other civil rights organizations. In a 1965 Gallup Poll, 46% expressed a dislike of him with 27% indicating they disliked him very much. In the 1967 Religion and Civil Rights Survey, 63% disagreed with the belief that King is an outstanding example of making Christianity relevant and meaningful and 63%. Further 83% agreed blacks would be better off taking advantage of the opportunities available rather than protesting.

Like contemporary black activists, Dr. King challenged institutions. It was through these challenges he was able to get those in both the black and white establishment to listen. Some argue that chants such as "Black Lives Matter" would have offended Dr. King. Here again they are wrong. He was opposed to the use of the term Black Power, because it could be viewed as condoning violence, but he never opposed racial pride. In his "I've Been to the Mountaintop" address, he demonstrated the importance of Black pride and efficacy stating, "whenever men and women straighten their backs up, they are going somewhere, because a man can't ride your back unless it is bent."

Much like Black Lives Matter, Dr. King made us recognize how the diseases of racism and economic inequality eat away at the nation's soul. Yes, Dr. King did preach about love, but he made it clear love is not a feeling, but a deed. He sought justice, which is the true expression of love. In his "I've Been to the Mountaintop" address, Dr. King used the story of the Good Samaritan to demonstrate that when you truly love your neighbor you will not ask, "If I stop to help this man, what will happen to me?" but "If I do not stop to help this man, what will happen to him?" It is through the pursuit of justice that our nation can heal its diseased soul.

Eric McDaniel is an associate professor in the Department of Government and a fellow of the Population Research Center and the Institute for Urban Policy Research & Analysis at the University of Texas at Austin. He is currently serving as a PRRI public fellow. He is the author of "Politics in the Pews: The Political Mobilization of Black Churches."