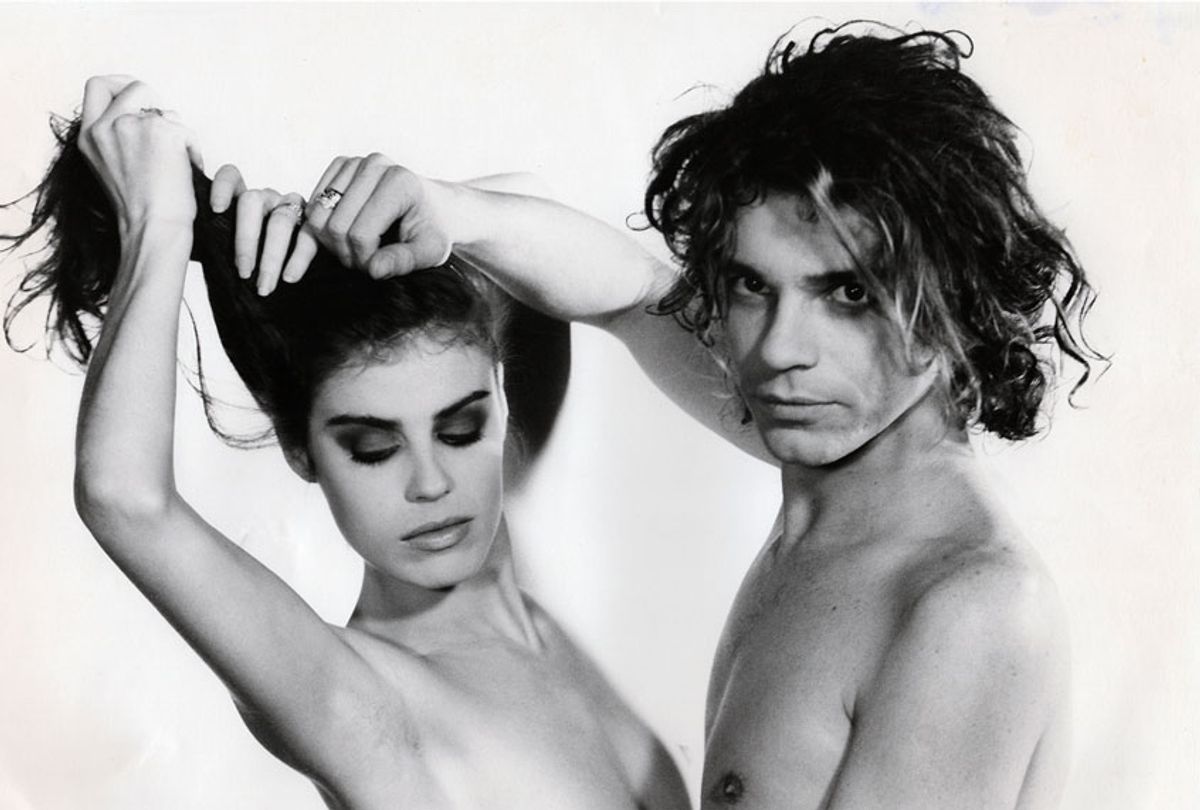 The beginning of the recent Michael Hutchence documentary "Mystify" starts with the INXS vocalist backstage before a show. Noise from an anxious, excited crowd buzzes in the background as the lithe musician casually throws on a jacket emblazoned with the word "HUTCH" on the back. As he heads toward the stage, the dull hum of the audience's cheering turns into a goose bump-inducing roar. The movie then shifts into INXS breaking into the elegant opening chords of "Never Tear Us Apart." Hutchence looks intense and focused as he sings the opening verse, which culminates with his Elvis Presley-like lip curl and snarl on the line "Never tear us apart . . ."

This scenario was a familiar one for Hutchence. During the '80s and into the early '90s, the Australian sextet INXS was one of the biggest rock bands in the world. In the U.S. alone, the group had seven Top 10 Billboard Top 100 hits, including the No. 1 song "Need You Tonight," and more than double rock radio hits. All told, they've sold more than 50 million albums globally, and played massive places at their peak — including, as documented in the recently reissued 1991 concert film "Live Baby Live," Wembley Stadium.

Still, INXS' commercial fortunes declined during the '90s — and the band itself never fully recovered their momentum after Hutchence died by suicide in 1997, although they carried on into the 2010s. However, today it's easy to forget just how big the band truly was at its commercial peak. There are many reasons for this, although a recent New York Times article, "The Internet Swallowed INXS. Can a Movie Rescue Its Legacy?" touched on how shifting industry trends — including and especially changing music formats — has blunted the band's impact.

"If you look at someone who is comparable to Michael Hutchence, like Jim Morrison from the Doors, that band didn't suffer the same sudden changes in technology as INXS did," Giles Martin, the producer who remastered the "Live Baby Live" sound, told the paper.

Where this diminished legacy also becomes clear is on the streaming platforms Spotify and Apple Music, both of which lack releases from INXS's catalog. The band's first two albums (1980's self-titled effort and 1981's "Underneath the Colours") have always had a lower stateside profile, so it makes sense they'd be absent. However, the 1984 album "The Swing" — which features well-known songs such as "Original Sin" and "I Send a Message" — isn't available. Neither is "Elegantly Wasted," Hutchence's final album with INXS, or the greatest hits albums that gave deeper insights into INXS' music, such as the rarities-packed 2001 effort "Shine Like It Does: The Anthology (1979–1997)."

In the U.S., many radio stations have also narrowed what aspects of INXS they highlight. Salon pulled up stats for the radio stations monitored by Nielsen BDSradio, and found that during a recent week-long period, the most-played song, the sinewy "Need You Tonight," received a total of 1,239 spins across seven radio formats. From there, the spins drop off precipitously, as the Top 5 is rounded out by "Devil Inside" (318), "What You Need" (288), "Never Tear Us Apart" (276), and "New Sensation" (238). For comparison, The top 5 songs from classic rock powerhouse Queen all had more airplay than INXS' "Need You Tonight," led by "Another One Bites The Dust" with 2,724 spins.

Taken as a whole, these things also obscure what a great band INXS was with Hutchence at the helm. Early on, the group was of a piece with modern pop and rock musicians: wiry new wavers XTC, quirky romantics Split Enz, the pub rock of Elvis Costello. Appropriately, in early live footage, Hutchence was already a mesmerizing presence, all unassuming charisma and confidence. Thanks to relentless touring, he and the rest of INXS gained self-assurance quickly, with Hutchence in particular blooming into a force that exuded vulnerability and strength. By the time of 1982's "Shabooh Shoobah," which featured the band's U.S. breakthrough singles "Don't Change" and "The One Thing," they were an ace live act.

It helped, of course, that INXS' hits sounded relentlessly modern, and transcended rigid pop and rock boundaries. Some songs boasted snappy riffs, funky grooves and brassy horns ("Suicide Blonde," "What You Need"); others sailed along on surging tempos and colorful flourishes ("The One Thing," "Don't Change"). And INXS never stayed in one place long: The multiplatinum smash albums "Kick" and "X" embraced contemporary sounds, highlighted by the swinging, piano-driven "Mystify," horn-peppered, hip-hop-tinged "Calling All Nations" and soulful rocker "Disappear." In the '90s, meanwhile, tender ballads "Not Enough Time" and "Beautiful Girl" coexisted with grungier moments ("The Gift"), Rolling Stones-like struts ("Please (You Got That…)," featuring Ray Charles) and danceable tunes with modern production flourishes ("Taste It").

The documentary "Mystify" — which is released digitally on Jan. 21 and on DVD and Blu-Ray on March 31 — goes a long way to illustrating the greatness of Hutchence and INXS. Written and directed by a friend of his, Richard Lowenstein, the film is understandably heartbreaking, as the narrative arc starts with his childhood and early years and builds to his death. However, "Mystify" avoids sensationalizing Hutchence's life — and, in fact, criticizes the tabloid frenzies that followed his romances — and instead illuminates a more three-dimensional, nuanced view of Hutchence's personality.

He was shy and introspective (in fact, report cards called him a "dreamer"), yet he hungered for fame and came alive while performing; in fact, he was instrumental in writing INXS vocal melodies as well as lyrics, and bandmate Andrew Farriss praised how Hutchence developed his vocal skills. He loved philosophy, literature, and all sorts of music, those close to him shared: The Supremes, James Brown, the Beatles' John Lennon, T. Rex's "Electric Warrior," Aretha Franklin's voice. And although moody, he was also tender and sensitive, and preferred having a family-like atmosphere around him.

Wisely, instead of having people from Hutchence's life as talking heads, "Mystify" chooses to make sure only their voices are heard, which puts the focus on the documentary's visuals: intimate movies of him as a child and adult, including in the studio with INXS and also hanging with girlfriends; vintage concert footage; and touching family photographs. As a result, the documentary keeps the focus on Hutchence's vibrant life and legacy, and mitigates sad moments; for example, the film sheds more light on what's now understood to be a traumatic brain injury Hutchence received in 1992, which people close to him note altered his behavior.

In recent years, Hutchence's absence has been felt more acutely, as INXS has been covered by acts such as Courtney Barnett, the Killers, Bruce Springsteen, and members of Green Day. "He raised the bar for both myself and Bono," former R.E.M. vocalist Michael Stipe told The Guardian in early 2018, noting that the band's "Strange Currencies" nods to INXS. "The middle eight of that is completely taken from INXS and from Michael. He was such an amazing rock star."

Appropriately, "Mystify" ends with Hutchence in a more intimate setting: working on the song "Mystify" with bandmate Andrew Farriss in a spacious studio settig. The clip is a color version of the actual "Mystify" video, and shows the frontman focused on nailing the song's vocal part as Farriss plays the piano. This gives way, once again, to joyous performance footage of INXS, so audiences leave the movie having one last glimpse of Hutchence onstage, beaming and in his element.