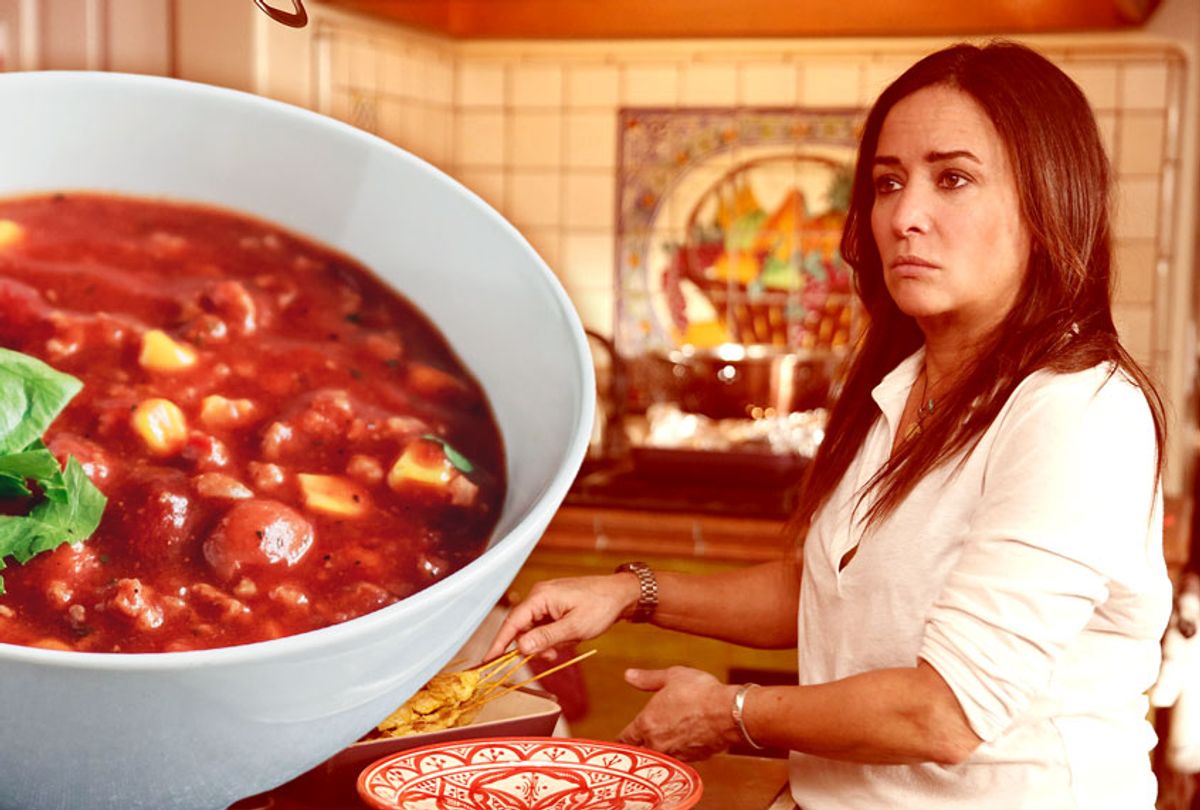 "Better Things" creator Pamela Adlon takes her show's dedication to warmth and authenticity to heart. You can tell that just by walking through the set of her character Sam Fox's home. There are no half-done rooms – every nook is styled to look and feel homey. And no place feels more lived-in than the kitchen.

This heart of the home is special, though, because the scenes depicting Sam cooking for her daughters Max (Mikey Madison), Duke (Olivia Edward), and Frankie (Hannah Alligood) are real. Adlon's devotion to ensuring her FX series feels hand-crafted extends to her depiction of Sam making meals for her family.

During a set visit that took place last fall, Adlon explained that she wants her series to double something "like a PBS guide to parenting hidden in a funny, off-kilter, raunchy" sense of humor.

Her cooking scenes play an important role in evoking that idea. "I derive so much personal pleasure from cooking in my life for my family and my friends and co-workers and it's just like – it's not hard," Adlon  explained.  "I want to show people that it is simple. I have this opportunity with my show to kind of break it down in a cinematic way and have people go, 'Oh. Yes. I could do that.'"

Take Sam's chili, for example. Chili is a dish that people take very, very seriously, a regional specialty. Competitions are devoted to determining the best recipe, and claimed titles are worn not only by individuals but entire towns.

On the other hand, chili also happens to be one of midwinter's preferred comfort foods – filling, soothing, a flawless balance of just-so spiciness mitigated by the gently acidic tang of tomato and substantive proteins. Not content to merely satisfy, good chili is a dish that nourishes.

Like many scripted turns of events in "Better Things," the chili Sam makes is based on Adlon's own recipe, "something I have been making my kids for years that has been modified over time," she said.

"The fun part about recipes is when you deviate and keep making changes and it gets better and better and easier," Adlon added. "I started making this chili with fake meat and it is still so satisfying – you never miss the meat. It is just an incredibly comforting, homey, simple food. And it's a fun one to bring to a potluck."

In Season 3 it becomes a peace offering and plays a vital role in closing out a painful arc in the Fox household. Over the course of its episodes Frankie estranged herself from Sam and leaves home, part of the teenager's effort to grapple with her identity. Sam responds by making a batch of chili, Frankie's favorite comfort food, and brings her a thermos filled with it in the season finale. This offering from the family kitchen demonstrates the constancy of a mother's love, that Sam is there for Frankie whenever she's ready to come home.

The actual recipe for Adlon's chili is distinctly straightforward and intentionally adaptable, fitting her philosophy of keeping everything uncomplicated and focusing on the people around you. She's also an advocate of being in the moment and enjoying the sensory goodness of preparing her dishes too. "Shmash them up with your hands," she directs in her recipe, referring to her preferred method of combining the whole tomatoes in with the rest of the ingredients.

Above all, this is a recipe that advocates casual simplicity, probably the most important ingredient in any dish one thinks of as comfort food.

"Everybody should cook, because your home gets seasoned. And it doesn't get stale," Adlon says. "When you cook in your home, even if it's a piece of toast, it puts a scent in the air that makes you feel safe and cozy. There is nothing like it in the world. . . . Plus, it's good to show your kids what you can do and share the process with everyone and let them be part of it."

Season 4 of "Better Things" premieres with two back-to-back episodes Thursday, March 5 at 10 p.m. on FX and stream the next day on FX on Hulu.

1-pound fake meat (or if you prefer ground beef or turkey, but even my youngest, Rocky, who used to be so f--king picky and a real meat eater, always kinda liked the fakey meat more)
1 big yellow onion chopped up
2 cloves garlic smashed up
1 can (28 oz) whole tomatoes with the juice (shmash them up with your hands when you add them to the pot)
1 can (15 oz) tomato sauce
3 cans (15 oz) kidney beans drained (keep some bean juice on the side, it's a secret weapon sometimes)
1 tsp. salt
2 tsp. chili powder (or more if people around you like that)
½ tsp. ground cumin
½ tsp. fresh pepper
1 tsp. onion powder
Seasonings to taste

In a large pot over medium heat cook the meat and onion — breaking the meat up with a spoon.

Cook until the meat is done and onion is soft (about 8-10 minutes). (Depends what meat you are cooking. Real meat until it isn't pink. Fake meat less time. Duh.)

Simmer for 30 min. Keep scraping bottom of pot so it doesn't burn. (If on the stove longer, and it dries out, add a bit of bean water.)

Next. Most important. Take a breath. Look at each other. Smile. Let's eat!