White House lawyers have no defense for Trump. So apparently they'll just use their time to play the victim 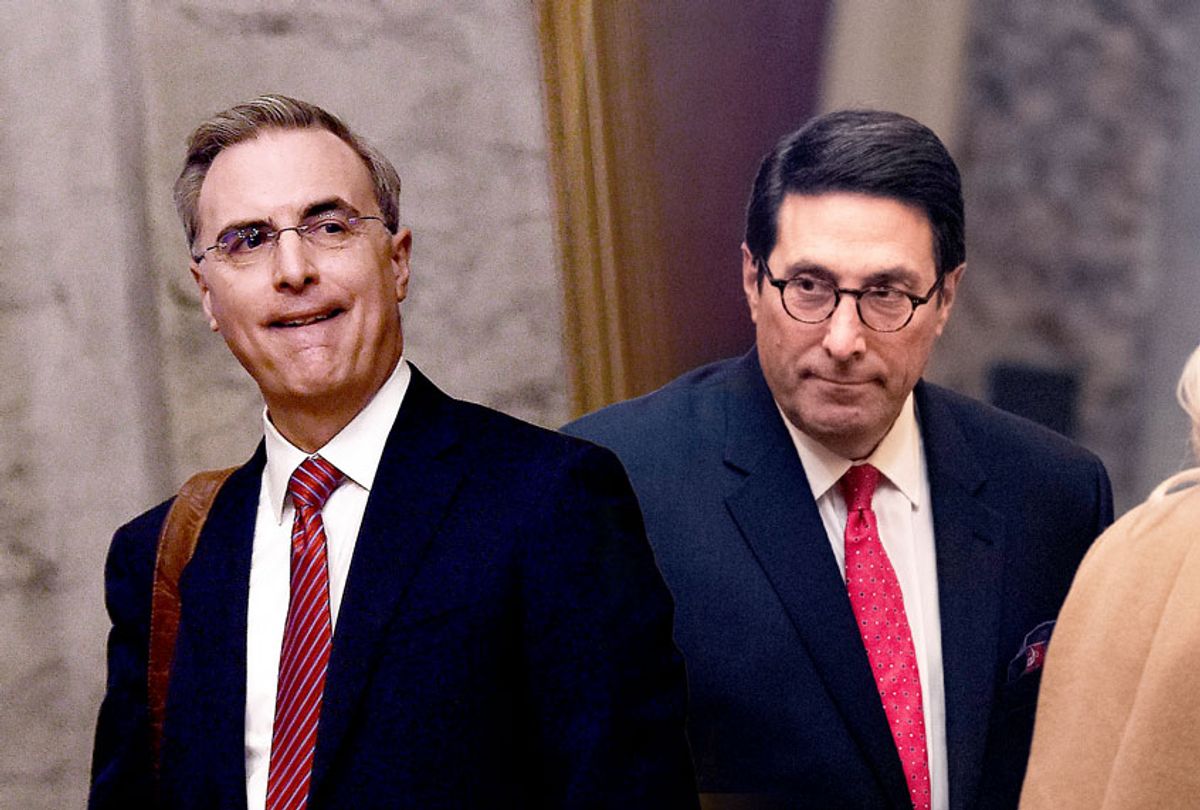 Donald Trump is clearly guilty. His guilt is such that even the bevy of miscreants tasked with deceiving the public about the depths of Trump's corruption — from congressional Republicans to Fox News pundits to the team of White House lawyers representing him in the Senate — cannot muster anything resembling an actual defense of Trump's impeachable offenses, those trying to blackmail the Ukrainian president into smearing his political opponents on TV and then stonewalling Congress over it.

This is not a result of any aversion to lying. Trump's lead lawyers, Jay Sekulow and White House counsel Pat Cipollone, showed their deep capacity for mendacity on Tuesday, during Senate arguments over the rules of the impeachment trial. This is simply because the evidence against Trump is so overwhelming that even the most accomplished of liars falters in the face of it. On "Fox & Friends," the anchors were reduced to discouraging people from watching the "boring" trial and instead suggesting that viewers "just turn to us to be able to summarize it for them".

Instead of bothering to make substantive arguments in Trump's defense, Sekulow and Cipollone have clearly decided to take a page out of Trump's book, and spend their time whining and declaring that the president is being unfairly singled out. Trump's supposed persecution is, of course, to be seen as part of a larger war on the most oppressed people of all time: White conservatives, who simply want to impose minority rule on the entire nation with little or no resistance.

While arguments are expected to begin in earnest Wednesday afternoon, Americans got a preview on Tuesday, during the lengthy debate over the trial rules and whether or not the Senate would try to gather more evidence in this case. (The answer was no, with every Republican voting against and every Democrat voting for more evidence, which offers yet another reminder that Republicans know full well that the only way to pretend Trump is innocent is by ignoring the facts.)

The House-appointed managers, let by Rep. Adam Schiff, D-Calif., spent most of the day arguing that trials work better when the evidence is actually presented, as opposed to Senate Majority Mitch McConnell's plan to stifle as much of it as possible.

White House lawyers, in contrast, simply used their time to declare that Trump is a victim and, by the transitive property of right-wing aggrievement, that the entire Trump base is a great mass of victims.

"They're not here to steal one election, they're here to steal two elections," Cipollone declared, claiming that Democrats were trying to "deny the American people the right to vote." (If you're keeping score, that would literally be the opposite of the truth.)

Cipollone is simply imitating his client, a relentless practitioner of the psychological concept known as "projection," sometimes known as "DARVO", short for "Deny, Attack and Reverse Victim and Offender." In interpersonal relationships, this is what abusers do to squash their victims' attempts to resist, by flinging accusations that the victim is the real victimizer.

Projection is also Trump's favorite political weapon. Whatever evil thing he's doing, he can be relied on to accuse his victims of doing it. He accuses Joe Biden of corruption in Ukraine, but it was Trump who was corruptly meddling in Ukrainian politics. He accuses immigrants of being violent, but in fact, he has empowered racists in law enforcement to be violent towards immigrants. He accuses Schiff of being "shifty," but it's Trump whose primary personality trait is trying to cheat every person he interacts with. He drums up racist hatred against Democratic congresswomen, and when people object, claims they're being racist against him. And so on.

Cipollone's rhetoric is just more projection. Trump is the one intent on cheating Americans out of a fair election, and Republicans are right there with him. In 2016, Trump repeatedly attempted to get involved in a Russian conspiracy to interfere with the election, going so far as to beg Russian intelligence to hack his opponent to help him (a request they attempted to fulfill). His purpose in withholding military aid and a White House visit from Ukrainian President Volodymyr Zelensky was to strong-arm Zelensky into going on CNN to lend credence to Trump's lies about Biden, whom Trump believes (or fears) is likely to be his 2020 Democratic opponent.

Trump's efforts to cheat in elections are aided by a long-standing Republican campaign to actively deny Americans the vote through voter purges, strict ID laws meant to keep people of color and college students from voting, and so much ingenious gerrymandering that even if Democratic voters manage to run the gauntlet and show up at the polls, it hardly counts. This Republican cheating is what most clearly led to Trump's election victory, since states like Wisconsin would have almost certainly tilted to Hillary Clinton in 2016 without it.

Sekulow spent much of his time running through a litany of Fox News-fueled conspiracy theories, falsely accusing Schiff of lying, carrying on about the confusing "Fast and Furious" conspiracy theory that dates back to Barack Obama's first term, and hyping the false claim that Trump is being persecuted by Clinton-loving FBI agents.

Here's what neither lawyer talked about much, however: The actual charges against Donald Trump. As the Washington Post's Dana Milbank noted Tuesday evening, White House lawyers barely mentioned Ukraine at all. The fact that Trump waged a campaign of intimidation and blackmail against Zelensky isn't really contested by Trump's defense team.

Instead, the argument is that if you have a problem with Trump's actions, it's only because you oppose the American flag and apple pie, and are acting out of some nefarious desire to deprive Trump supporters of their right to inflict their leader on the majority of Americans who preferred someone else.

It's tempting to shrug off these arguments as hot air, since no substantive defense of Trump is on offer. But the truth is that this strategy could open the door to justifying all sorts of Trumpian corruption. It's easy to imagine the same arguments, with minor tweaks, being used to justify Trump's refusal to leave office next year after he loses the election. After all, if Democrats using their constitutional authority to Trump accountable for his crimes is unfair persecution, it's not much of a leap to argue that a Democrat winning an election is unfair persecution as well.