Mainstream media: U.S. has the permanent right to use violence anytime, anywhere 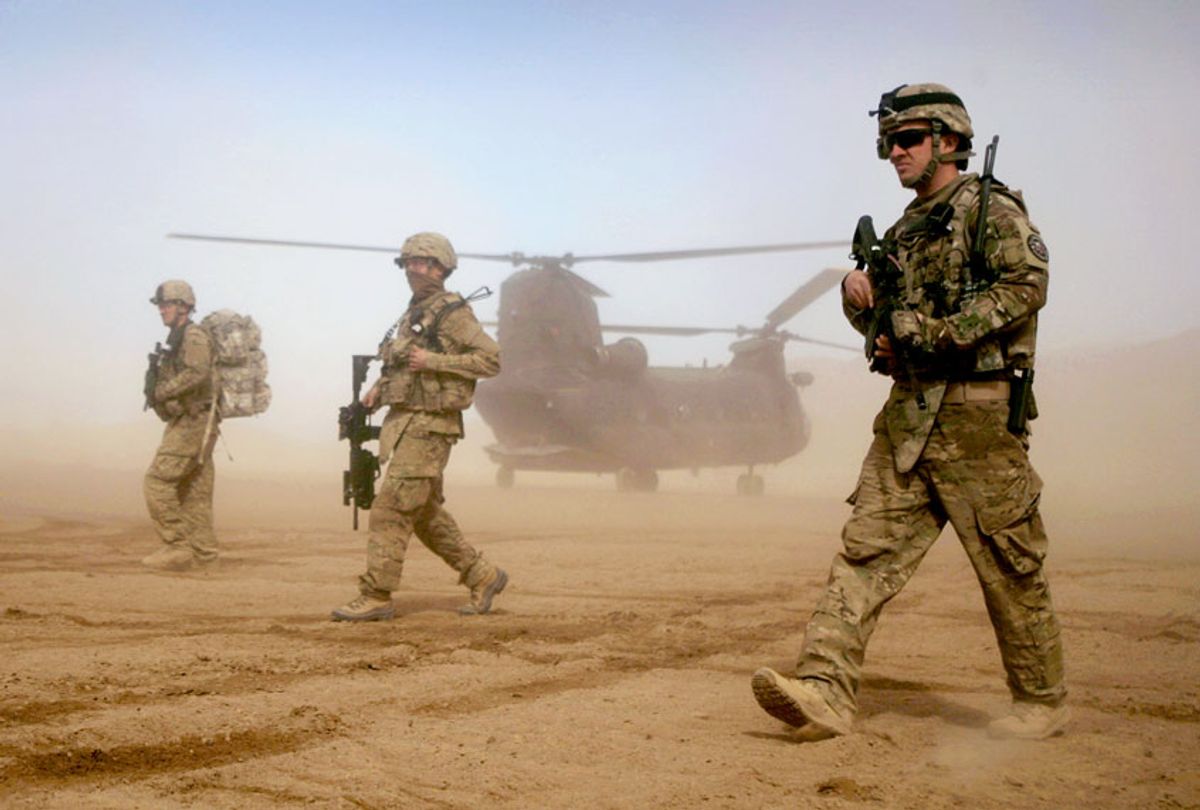 In this Saturday, Jan. 28, 2012 file photo, U.S. soldiers, part of the NATO- led International Security Assistance Force (ISAF) walks, as a U.S. Chinook helicopter is seen on the back ground near the place where the foundation of a hospital was laid in Shindand, Herat, west of Kabul, Afghanistan. (AP Photo/Hoshang Hashimi)
--

Even when critical of U.S. actions, media commentary on recent U.S. bombings and assassinations in the Middle East is premised on the assumption that the U.S. has the right to use violence (or the threat of it) to assert its will, anytime, anywhere. Conversely, corporate media coverage suggests that any countermeasure — such as resistance to the U.S. presence in Iraq — is inherently illegitimate, criminal and/or terroristic.

One step in this dance is depicting U.S. military forces in Iraq as innocent bystanders under attack by sadistic Iranian puppetmasters. Media analysis of the killing of Iranian Gen. Qassem Soleimani consistently asserted that he was "an architect of international terrorism responsible for the deaths of hundreds of Americans" (New York Times, 1/3/20) or "a terrorist with the blood of hundreds of Americans on his hands" (Washington Post, 1/7/20). According to Leon Panetta (Washington Post, 1/7/20), a former defense secretary and CIA director,

The death of Soleimani should not be mourned, given his responsibility for the killing of thousands of innocent people and hundreds of US military personnel over the years.

There is little evidence for this contention that Iran in general or Soleimani personally is responsible for killing hundreds of Americans. When the State Department claimed last April that Iran was responsible for the deaths of 608 American service members in Iraq between 2003 and 2011, investigative journalist Gareth Porter (Truthout, 7/9/19) asked Navy Commander Sean Robertson for evidence, and Robertson "acknowledged that the Pentagon doesn't have any study, documentation or data to provide journalists that would support such a figure."

Porter showed that the U.S. attribution of deaths in Iraq to Iran is an unsubstantiated government talking point from the Bush-Cheney era, one that was exposed at the time when Lt. Gen. Ray Odierno admitted that, though the U.S. had attributed Iraqi resistance fighters' weapons to Iran, U.S. troops found many sites in Iraq at which such weapons were being manufactured. 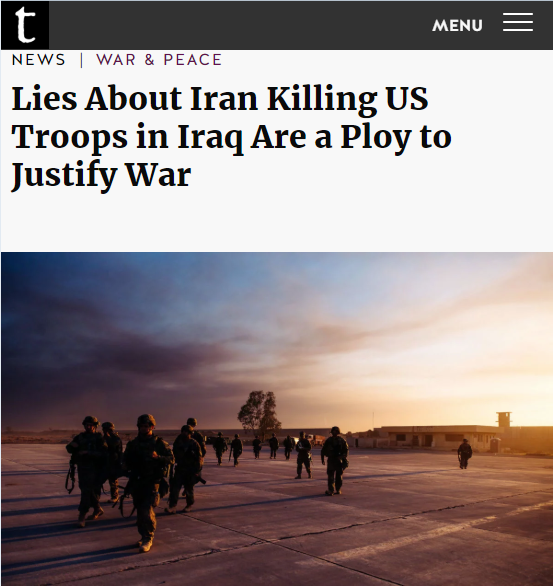 Scholar Stephen Zunes (Progressive, 1/7/20) similarly demonstrated the lack of evidence for the idea that Iran is behind the killing of U.S. forces in Iraq. Zunes noted that the National Intelligence Estimate on Iraq, compiled by America's 16 intelligence agencies, downplayed Iran's role in Iraq's violence at roughly the same time that the Bush administration was saying that Iran was culpable.

As Porter pointed out, there was a much simpler explanation for American deaths in the period: The U.S. targeted Muqtada al-Sadr's Mahdi Army and the Mahdi Army fought back, imposing more casualties on U.S. troops.

That the pundits dusted off 13-year-old propaganda to rationalize killing Soleimani is a clear indication that they were desperately grasping for any imperialist apologia within reach. If the American public is led to believe that Soleimani killed hundreds of Americans, large swathes of it are likely to regard his assassination as justified, necessary or, at worst, a feature of the tit-for-tat ugliness inherent to war.

This narrative also ideologically shores up the U.S. war on Iran in the American popular consciousness by presenting Iranians as primordially violent savages out to spill the blood of Americans, notably those in the military who are in the Middle East, presumably doing nothing but minding their own business. Presenting Iran as the reason for attacks on U.S. forces in Iraq also implies that Iraqis had little objection to the U.S. invasion, legitimizing the ongoing U.S. military presence in the country. The most obvious point about the deaths of U.S. soldiers in Iraq is that they wouldn't happen if U.S. soldiers weren't in Iraq.

Another media dance move is to condemn anti-imperial violence while naturalizing imperialist violence. An editorial in the New York Times (1/3/20) said that Soleimani

no doubt had a role in the campaign of provocations by Shiite militias against American forces in Iraq that recently led to the death of an American defense contractor and a retaliatory American airstrike against the militia responsible for the attack.

Having U.S. troops in Iraq, a country in which the U.S. is responsible for the deaths of hundreds of thousands, is not a "provocation," in the Times' perspective; opposition to their presence is the provocation.

The Dec. 27 attack that killed the U.S. contractor did not occur in a vacuum. In 2018, the U.S. was suspected of bombing affiliates of Kataib Hezbollah, the group the U.S. blames for killing the contractor. Israel is suspected of carrying out a string of deadly bombings of the Iraqi Popular Mobilization Forces, of which Kataib Hezbollah is a key component, between July and September, a scenario at which Israeli Prime Minister Benjamin Netanyahu hinted.

The U.S. reportedly confirmed that Israel was behind at least one of the bombings, and said it supported Israel's actions while denying direct participation. In any case, lavish U.S. military support for Israel means that the former is effectively a party to the latter's bombing. Thus, the Kataib Hezbollah attack that killed the contractor can be seen as "retaliatory," which complicates the notion that the subsequent U.S. attack was as well.

Another Times editorial (1/4/20) describes Soleimani as "one of the region's most powerful and, yes, blood-soaked military commanders." At no point is Trump or any other U.S. leader described as "blood-soaked" or anything comparable — here, or in any of the mainstream media coverage I can find — even as he and his predecessors are sopping with that of Afghans, Iraqis, Libyans and Syrians, to cite only a few recent cases. Evidently imperial violence is so righteous it leaves no trace behind.

What is clear is that one of the PMFs, Kataib Hezbollah, has been behind the escalating violence over the past several months as part of a campaign (assuredly with Iranian approval) to force out US troops. The campaign culminated in the December 31 attack on the US Embassy in Baghdad. (The head of Kataib Hezbollah, Abu Mahdi al-Muhandis, was killed with Soleimani.)

Kataib Hezbollah's actions are called "violence" twice in these three sentences, with their apex apparently being "the December 31 attack on the US Embassy in Baghdad." Remarkably, the author makes no mention of the Dec. 29 U.S. airstrikes on five sites in Iraq and Syria that the U.S. says belong to Kataib Hezbollah, bombings that reportedly killed 25 people and injured 55. Those, it would seem, do not constitute "violence." Iraqis damaging the embassy of the country whose economic sanctions killed half a million Iraqi children is "violence," but lethal U.S. air raids are not. And expelling foreign armies weakens state sovereignty! 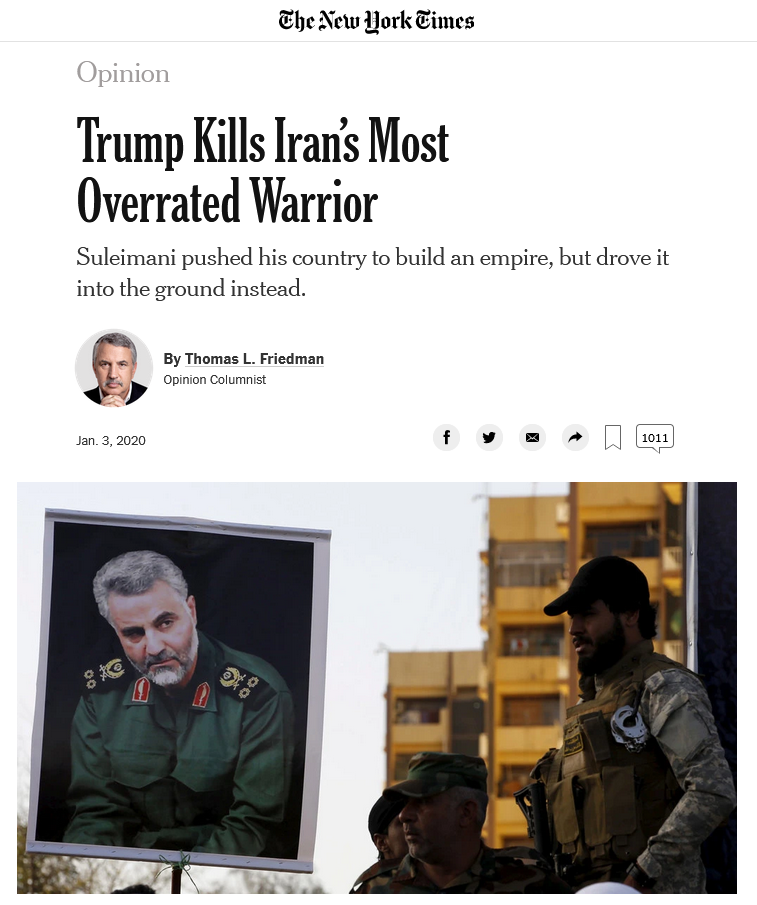 Thomas Friedman's Times article (1/3/20) on Soleimani's murder was bad even by Friedman standards. He dismissed the protests at the U.S. embassy:

The whole "protest" against the United States Embassy compound in Baghdad last week was almost certainly a Soleimani-staged operation to make it look as if Iraqis wanted America out when in fact it was the other way around. The protesters were paid pro-Iranian militiamen. No one in Baghdad was fooled by this.

In a way, it's what got Soleimani killed. He so wanted to cover his failures in Iraq he decided to start provoking the Americans there by shelling their forces, hoping they would overreact, kill Iraqis and turn them against the United States. Trump, rather than taking the bait, killed Soleimani instead.

That there were thousands of protesters at the U.S. embassy and that the Iraqi security forces stood aside to allow them to demonstrate suggests that what happened at the embassy cannot be reduced to a hoax stage-managed and paid for by Iran. Furthermore, the U.S. did kill Iraqis two days before the protests, and that's what ignited them (to say nothing of the longer term record of the U.S. devastating Iraq). Like Hadley, however, Friedman pretends that the Dec. 27 U.S. bombings didn't happen.

In the imperial imagination, the U.S. has the right to violently pursue its objectives wherever it wants, and any resistance is illegitimate.