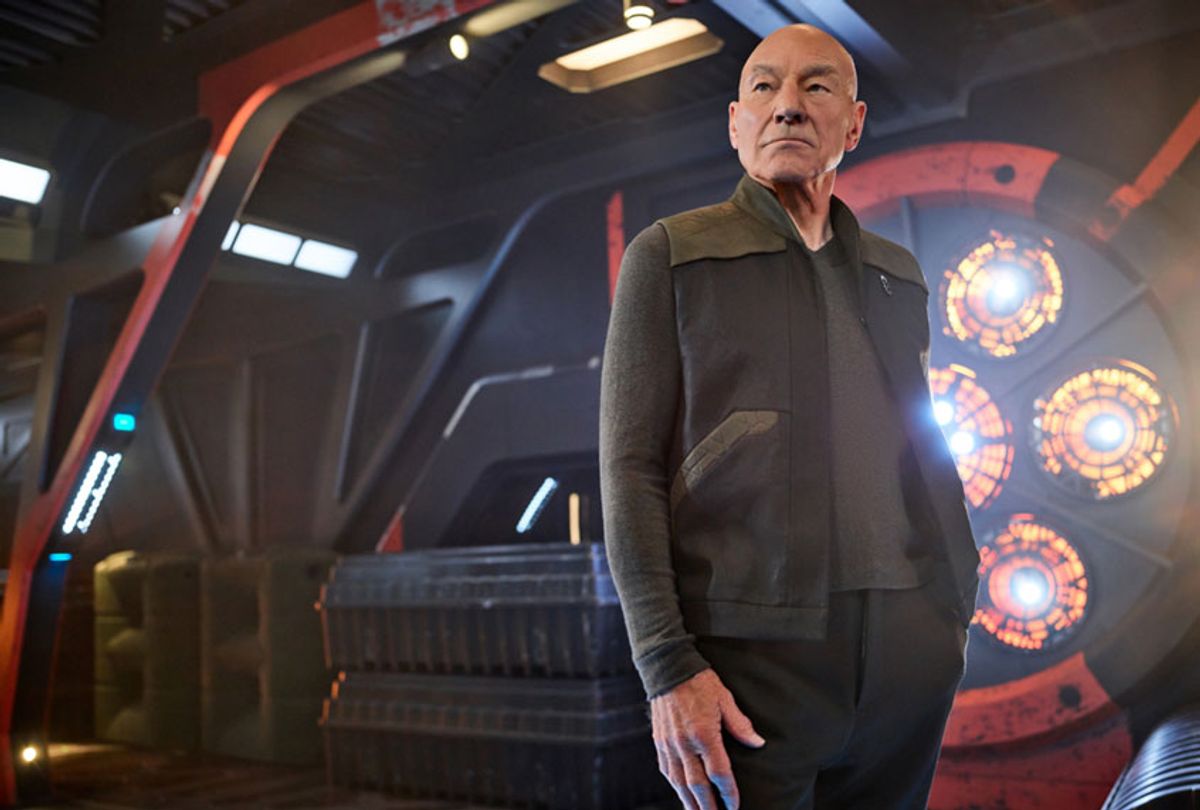 When we say goodbye to our favorite TV series and characters – presuming that the farewell is a fond one – topmost on our wish list is that our time with them concludes sensibly and well. A close second may be that the figures we came to love dearly receives some resolution that fits them, whether that be in the form of reward or punishment.

And if any character deserves to live happily ever after, it is Sir Patrick Stewart's Starfleet Admiral Jean-Luc Picard. As the captain of "Star Trek: The Next Generation," which aired from 1987 through 1994, Picard made his share of mistakes.  But he meditated on them, philosophized, and devoted himself to constantly learning. His simultaneous devotion to the classics of Earth's literature and history and close read on galactic diplomacy gives him a unique level of empathy with the lifeforms and cultures he encounters, augmented by creative strategy and quick thinking.

Seven seasons and four feature films cemented him as the captain among captains. So the moment "Star Trek: Picard" beams us into Admiral Jean-Luc Picard's bucolic retirement at Chateau Picard in La Barre, France, we might draw comfort in knowing that all seems to be well.

Fourteen years after his retirement from Starfleet, the sun shines upon Picard's fertile vineyard, and his needs are attended to by thoughtful caretakers and his impeccably behaved pit bull Number One.

But his sleep is troubled by dreams of Lieutenant Commander Data (Brent Spiner), who had sacrificed himself years before, in the events of the big-screen "Star Trek: Nemesis."

Nothing in Picard's world or any quadrant of the "Star Trek" universe happens without a reason, and to say any more than this would ruin the discoveries "Picard" offers in its premiere episode on CBS All Access.

Then again, maybe all you need to know is that the story draws the Admiral out of retirement for very good reasons beyond fan service – although I have to admit, it's tantalizing to see most of the band getting back together.

Among the "TNG" alumni confirmed to be returning for "Picard," besides dreamscape Data, are the Admiral's original Number One, William Riker (Jonathan Frakes ); Seven of Nine (Jeri Ryan — technically a "Voyager" alumna only, having never appeared on "TNG"); and Deanna Troi (Marina Sirtis). Making this sequel a more promising proposal than some mere reunion are the circumstances that inspire Picard to come out of retirement and offer his services to the galaxy at least one more time.

And I'm not referring to the specific device or the primary mystery steering this season, which has something to do with a mysterious woman named Dahj (Isa Briones) who faces an existential crisis of extreme proportions. Mind you, her story is a fine carrot for the premiere to dangle, a tantalizing origin story partly cloaked in impressive action sequences. These days you can't have a "Star Trek" series in the modern age without a few flying fists and explosions.

Don't misinterpret my meaning with that comment – rather, see it as one of the more invigorating accoutrements to the fun of "Picard" alongside what could shape up to be a wonderful science-driven subplot involving a sidelined researcher named Dr. Agnes Jurati (Alison Pill).

But a broader point of interest baked into the plot involves the connection between "Picard" and the events of the 2009 "Star Trek" film which, like this series, is co-written by Alex Kurtzman. In the main timeline depicted in that movie, Spock fails to stop a supernova that destroyed the Romulan home world, leading the enraged antagonist Nero (Eric Bana) to jump backward in time and take his revenge out on Vulcan and Starfleet for failing his people.

[Editor's Note: Although "Picard" takes place in the Prime timeline, it has been impacted by events in the Kelvin timeline (from the 2009 film). The destruction of the Romulus home world was in Prime and enabled the Kelvin jump to happen.]

Timelines are central to "Star Trek," and "Picard" begins by revealing the title character's reaction to that same disaster – a mission of good intentions thwarted by politics.

Thus Picard's retirement in the aftermath of that destruction is an uneasy one, and not entirely happy: He parted ways with Starfleet out of disillusionment – because, he says, Starfleet "was no longer Starfleet."

The telling part here is that his contention was over Starfleet's refusal to help the Romulans, a mercurial people that left Vulcan many millennia ago and formed a separate empire that resisted and often attacked the Federation. Over Picard's career there was no love lost between him and the Romulans; they even set his own clone against him in "Star Trek: Nemesis." (Arguably the only enemy that scarred him more deeply was the Borg.)

Therefore the destruction of Romulus would have fundamentally transformed the power dynamic in the galaxy – ostensibly in the Federation's favor.

But it represented the annihilation of an entire people. Nevertheless the Federation's adversarial view has filtered into the societies under its umbrella, cementing attitudes that reflect some of the bitterest poisoning Western culture in our version of 2020.

Kurtzman, along with his fellow executive producers Michael Chabon, Akiva Goldsman, and James Duff (who collaborated in writing the premiere) spell out what that means in subtle ways in the premiere: During a contentious interview in which Picard is asked to relive the dreadful details of that mission, he tells his interviewer that the Federation understood there were millions of lives at stake. She firmly interjects with a qualifier. "Romulan lives," she says.

In these moments "Picard" presents the more profound aim within the TV-ready plot serving as this season's navigational tool, which is to repackage one of the key existential questions of this moment. That is, what happens when those who adhere to a set of governing ideals are failed by the very institution built to serve and live up to those ideals? That's the new reality in which we find our retired hero, and at the end of the 24th century, it is nipping at the hero's heels and will not let him rest.

"Picard" still depicts the future as a place of grand possibility and imagination, but it's also one that has somehow diverged from the relative cultural harmony of which its late creator Gene Roddenberry dreamt. Roddenberry's version of the years to come saw humanity as having reached a state of unity, a time in which we had learned to overcome our baser sense of division and prejudice. Our leaders in this idealized future would be inspired by curiosity and empathy.

But that was a story born in 1966, in the midst of great striving and hope. "Picard" debuts in a time of xenophobia, nationalism, exclusion, and retreat – all symptoms of a fear that has seized us since 9/11, and has metastasized into an age of extreme, violent divisiveness. Hence the response to the natural ending of one adversary – and the wiping out of another – is a wave of the hand and an attempt not to understand, but find blame.

And the thought of what Stewart and the writers might do with this is invigorating, because in its opening episodes, "Picard" is anything but dour and pessimistic. On the contrary, the 79-year-old actor is as vital and determined as ever, returning our beloved Jean-Luc into the fray with a renewed purpose.

"Sitting here all these years, nursing my offended dignity, writing books of history people prefer to forget, I never asked anything of myself at all," he laments while thrashing on a couch as his caretakers attempt to calm him. "I haven't been living. I've been waiting to die." With that he springs up, changes course and engages anew. And in the earliest leg of this voyage called "Picard," we're over the moon to have him back at the helm.