Ayanna Pressley skewers Betsy DeVos for comparing abortion rights to slavery: “Say this to my face" 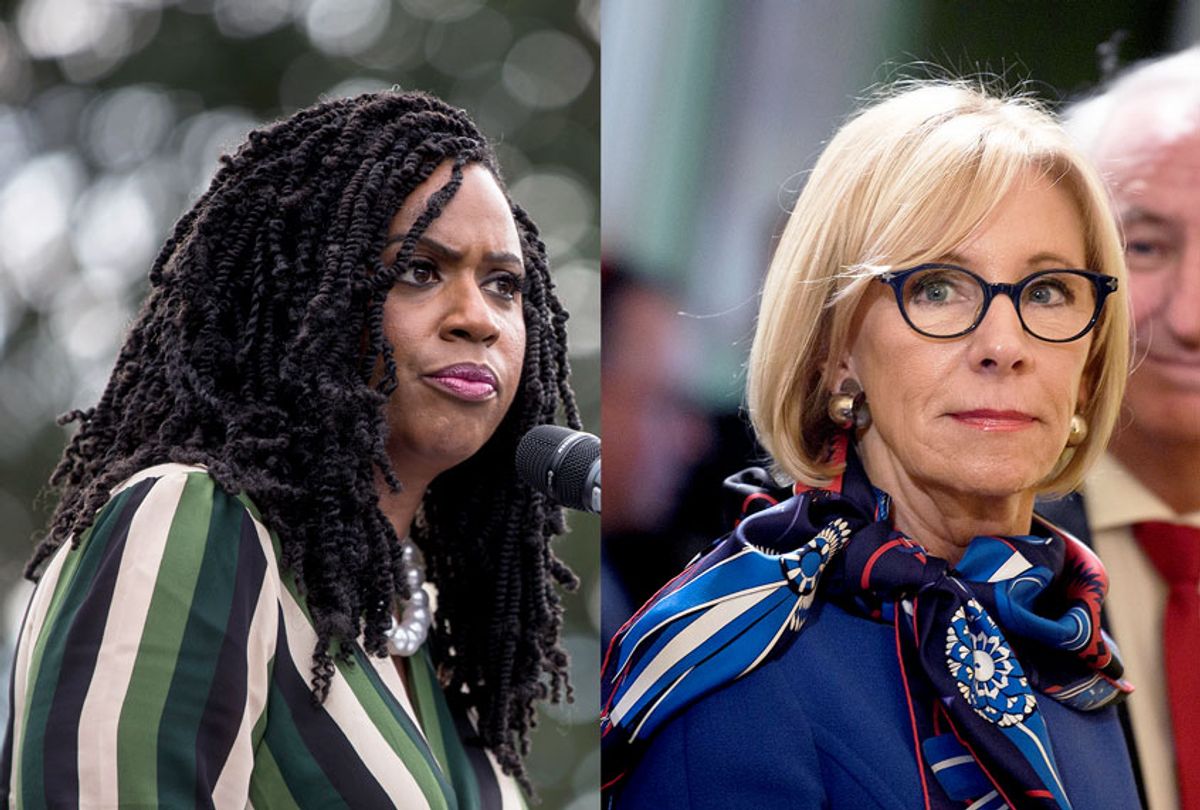 Secretary of Education Betsy DeVos came under heavy criticism after comparing the abortion rights debate to the battle to end slavery during a speech to Christian students Wednesday in Washington.

DeVos claimed that former Republican President Abraham Lincoln also "contended with the pro-choice arguments of his day," while speaking at a Colorado Christian University at the Museum of the Bible, according to the Colorado Times Recorder.

"They suggested that a state's choice to be slave or to be free had no moral question in it," DeVos said. "Well, President Lincoln reminded those pro-choicers that is a vast portion of the American people that do not look upon that matter as being this very little thing. They look upon it as a vast moral evil."

"There are many in the pro-life movement who heroically work to make abortion unconstitutional," she added. "Tonight, let's talk about making it unthinkable."

"Dear Betsy, As a Black woman & the Chair of the abortion access task force, I invite you to come by the Hill and say this to my face," she said on Twitter. "Would welcome the opportunity to educate you."

DeVos, a graduate of Christian University, who was speaking to students in town to attend the March for Life, also said there was "irony" in supporting a woman's right to choose to have an abortion but not supporting mothers who want to choose a different school for their kids.

The secretary of education discussed Espinoza v. Montana Department of Revenue, a Supreme Court case which could decide whether states can bar taxpayer funds from going to religious private schools. DeVos personally attended arguments in the case.

DeVos told the crowd that she was "especially eager for the Supreme Court to put an end to the last acceptable prejudice," arguing that students are denied the right to choose to pursue a religious education.

She later said at a Q&A session with conservative radio host Hugh Hewitt that allowing religious schools to receive financial aid would empower low-income families to "make the choices for their kids that match their values or a better fit their assigned schools."

DeVos and her allies have spent millions in an effort to allow public funding for religious education, The Washington Post reported. Last year, DeVos requested $5 billion for her department's 2020 budget in order to create a federal tax credit to fund scholarships to religious schools, which she called "the conservative answer to what ails American education."

She claimed that the provision was unconstitutional, according to The New York Times, and argued that "those seeking to provide high-quality educational services to students and teachers should not be discriminated against simply based on the religious character of their organization."

But advocacy groups like Americans United for Separation of Church and State said DeVos overstepped her authority to undermine the Constitution.

"Betsy DeVos is neither the Supreme Court nor Congress," Maggie Garrett, the group's vice president for public policy, told The Washington Post. "She does not get to unilaterally declare that a statute is unconstitutional, especially with a provision that is designed to protect church-state separation — a bedrock of our democracy."