“To speak about Thomas Edison as if he is still alive is simply something that is scary,” attorney Maya Wiley says 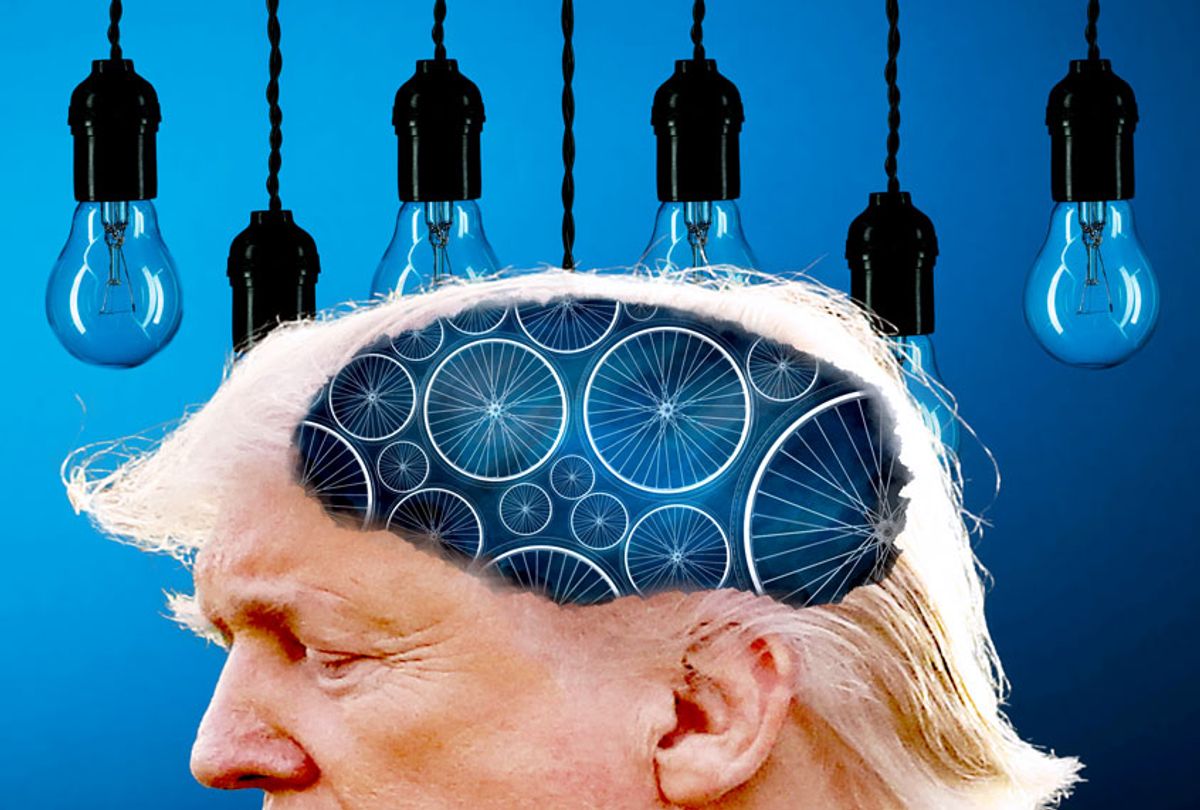 The wheels in Donald Trump's head are turning, but the lights aren't on (Getty Images/Salon)
--

"I spoke to him very recently, and he's also doing the rockets. He likes rockets. And he does good at rockets, too, by the way. I never saw where the engines come down with no wings, no anything and they're landing. I said, 'I've never seen that before,'" the president added.

Maya Wiley, a former attorney for the ACLU and NAACP, told MSNBC's Brian Williams on Wednesday that she found Trump's "both sad and disturbing."

"I do have to wonder what that means for him cognitively and whether or not something is going on," she said. "I had a mother who had Alzheimer's and passed away, and it's not funny. We should be very concerned about his health."

"You're not the first person to say that," Williams replied.

"To speak about Thomas Edison as if he is still alive is simply something that is scary," Wiley aid.

"We have to point out this is someone's client," Williams said. "At the same time as he made those comments, he's being actively defended in a de facto public court of law."

Former federal prosecutor Joyce Vance agreed that "everything about this is extremely disturbing."

"He is on trial for engaging in misconduct … At the same time, as Maya points out, he constantly engages in conduct that calls into question his fitness, if not his mental and physical condition," she said. "And this, I think, is a pressing concern that Congress needs to take seriously, because the Cabinet, which would have some authority under the 25th Amendment to do something about it, apparently doesn't."

Yale psychiatry professor Bandy X. Lee, the founder of the World Mental Health Coalition, agreed with the attorneys' assessment in an interview with Salon.

"We must consider Donald Trump's mental compromise as being threefold: emotional, cognitive and neurological — including potential substance misuse," Lee said. "While it is not possible to come to a diagnosis from a distance, it is very possible to distinguish many things, such as abnormal symptoms and signs — whether these are patterns of strategic presentation or stereotypical disease over time, trends of decline and dangerousness."

"He is less able to stay with a topic, to find complex words, to form complete sentences. And the content of his words is becoming more impoverished, if not nonsensical," Lee said. "Connecting the present to a distant past or to history is common in progressive dementia, and while dementia is still not a diagnosis we can make without detailed medical records, these are serious signs of deterioration we should not ignore."

"Whatever the source of the loose association, he speaks of Thomas Edison as if he were a contemporary of Elon Musk that we should equally protect. And he mentions light bulbs and the wheel as if they were recent inventions like the electric car," she continued. "His impairment should be very clear to everyone, and I have stated that it is inhumane, either for him or for ourselves, to continue to prop up this man as being normal."

"As he declines cognitively, his other symptoms are likely to worsen, as well," Lee added. "He mentions at the end, 'We help him, so he has to help us,' as if he were keeping Mr. Musk beholden lest he betray him or leave him without protection — what someone is likely to say when he is paranoid."

Lee was joined by hundreds of psychiatrists from around the country in calling on Congress to convene a panel of mental health professionals to evaluate Trump's mental state. Lee wrote a joint op-ed earlier this week with former White House ethics chief Richard Painter warning that Trump should not be tried by the Senate, because he "may not be mentally competent."

"We argued that the Senate trial should not go forward as long as he has raised, through multiple recent comments, doubts about his competence," Lee told Salon. "In any court of law, if questions about the defendant's competence arise, the trial cannot proceed, since the law requires that only those who are competent to stand trial be tried."