Donald Trump is the O.J. of American politics — and we know how that story ends

Everyone knows he murdered the Constitution, yet the verdict in his Senate trial is a foregone conclusion 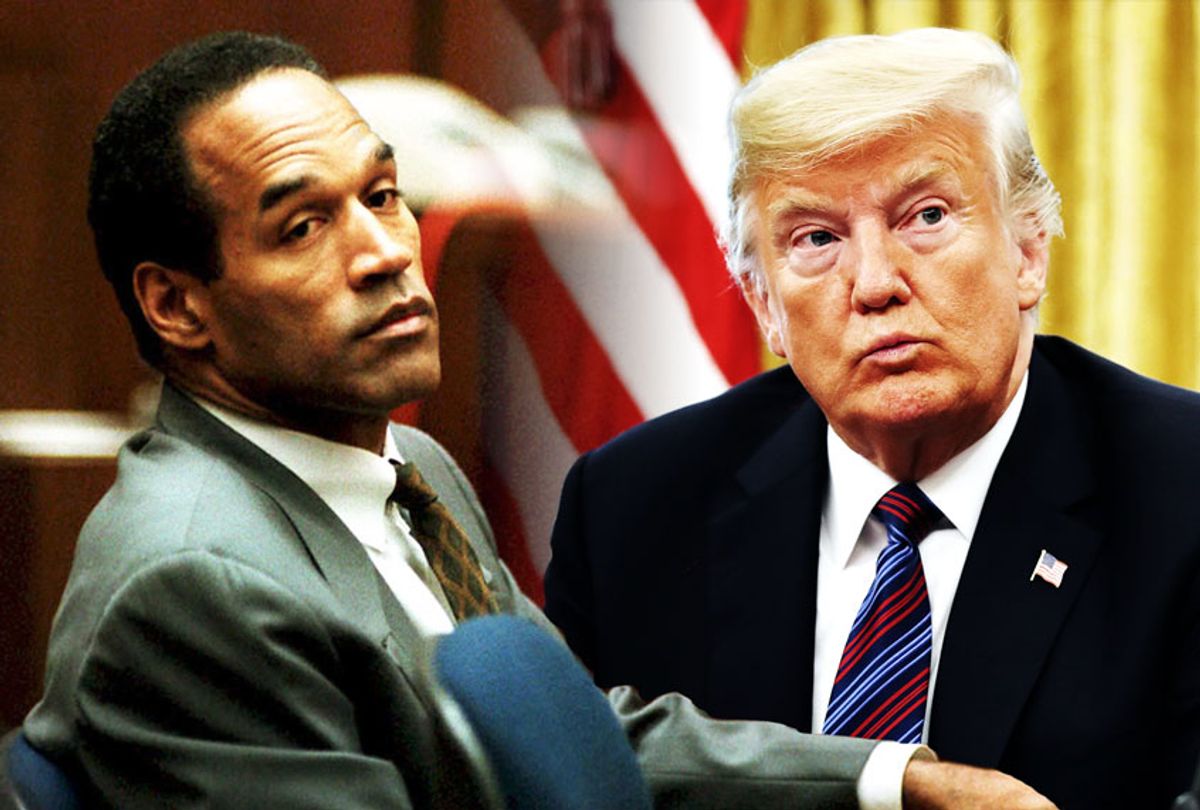 Remember the low-speed chase? Former NFL star, actor and TV pitchman O.J. Simpson had just been charged with the murders of his ex-wife, Nicole Brown Simpson, and her friend, Ron Goldman. The two had been found stabbed to death outside Nicole's condominium in the Brentwood neighborhood of Los Angeles, just after midnight on June 13, 1994. O.J. had quickly come under suspicion for obvious reasons: Nicole was his ex-wife. LAPD detectives were ordered to notify Simpson of Nicole's death and drove to his house on nearby Rockingham Avenue. There they found blood on the door handle of his Bronco and inside his house, and on a right glove which matched a left-hand glove discovered at the murder scene. The gloves were found to have both Simpson's blood and the victims' on them.

Evidence continued to mount against O.J. over the next few days. More blood was found inside his house. A tenant of Simpson's, Brian "Kato" Kaelin, and Simpson's limo driver were questioned and both implicated him. Simpson wrote what amounted to three suicide notes, to the public, his girlfriend and his mother. Police were sent to his house to arrest Simpson but discovered that he had escaped in a white Ford Bronco belonging to his friend Al Cowlings, who was driving. Police would later find $8,000 in cash, a loaded .357 magnum handgun, Simpson's passport, family pictures and a fake goatee and mustache in the Bronco. Simpson was declared a fugitive and an all-points bulletin was issued for his arrest.

A 911 call placed by Simpson was traced to the Santa Ana freeway and an hour later, Simpson was spotted on the freeway in the back of Cowlings' Bronco traveling at 35 miles per hour. Simpson had the .357 aimed at his head. What became known as the "low-speed chase" lasted for hours. Thousands of spectators packed overpasses along the route, and all the major networks, including CNN, interrupted regular programming to carry the chase, which was followed by some 95 million viewers as it dragged on. (Ninety million had watched that year's Super Bowl.) The chase ended 50 miles later at Simpson's estate, where he was arrested, after drinking a glass of orange juice and talking to his mother.

I lived in L.A. at that time and remember watching the chase that afternoon and evening. More than four days had transpired since the murders of Nicole Simpson and Ron Goldman. In L.A., the case had gotten round-the-clock coverage. By the time Simpson's suicide note was read by his lawyer and he was found with a gun to his head in the backseat of Cowlings' Bronco on the 405 freeway, everyone in North America, and possibly the world, knew that O.J. had killed his wife and her friend.

But as we all know, Simpson's "dream team" of lawyers, which included a much younger Alan Dershowitz, got him off. By the end of the trial, everyone knew what the verdict would be, despite a mountain of evidence that he did it. The defense had put the LAPD and prosecution evidence on trial. "If it doesn't fit, you must acquit" was lawyer Johnny Cochran's clever counter to the bloody glove soaked in the DNA of O.J. Simpson, his dead wife and her lover. O.J. Simpson killed them and got away with it.

Now Donald Trump, O.J.'s political doppelganger, is going to get away with it. We have witnessed the Trump low-speed chase over the last four years. It began when he was running for president in 2016. Everyone knows that Trump called out for help from the Russians, and everyone knows they hacked the Democrats' emails and did everything they could to help elect him. Everyone knows that Trump fired FBI Director James Comey because he wouldn't pledge his loyalty and had begun an investigation of Russian influence in Trump's campaign. Everyone knows Trump has done nothing but cozy up to Vladimir Putin since taking office, in an apparent "thank you" for the help Putin gave him. Everyone knows that Trump has lied repeatedly, not only about his corrupt campaign in 2016, but about practically everything else he's done since his inauguration. He has told some 15,413 lies since taking office, through early December, according to the Washington Post.

O.J.'s lawyers never really bothered to make a case that he didn't do it. How could they? His DNA was all over the place. It was his ex-wife who was dead, stabbed multiple times in the head and upper body and neck. Testimony at the trial would show that after Simpson killed Goldman, he returned to his wife's body, put his foot in the middle of her back and pulled her head up by her hair and slit her throat, nearly decapitating her. Who could have been so enraged he would practically cut her head off? A random guy on the street? No, she was murdered by her ex-husband, and everybody knew it. Everyone knew the motive, too. A restaurant menu was found under her body. She had drawn a bath and surrounded the tub with candles. She and Goldman were going to order a takeout dinner, soak in a romantic bath and make love. Someone was mad enough to kill at the thought of it, and that someone was O.J. Simpson.

Trump's "dream team" won't try to make a case that he didn't do it either. How could they? Trump released the nearly verbatim notes from his call with Volodymyr Zelensky. It's right there in his own words. He asked the Ukrainian president to do him "a favor" by investigating his chief political rival, Joe Biden, and to look into his harebrained conspiracy theory that somehow Hillary Clinton's email server had ended up in Ukraine, and that it had been the Ukrainians, not the Russians, who interfered in the 2016 election.

The House managers took the time on Thursday to establish Trump's motive, showing that he hadn't withheld aid to Ukraine in 2017 or 2018, and in fact waited until polls showed Biden at the head of the Democratic pack to pressure Ukraine to investigate him in 2019. Only then did he withhold nearly $400 million in aid. He didn't bother asking Zelensky to investigate corruption in Ukraine. No, all he wanted from the president of Ukraine was an investigation of Joe Biden.

There were multiple theories why the L.A. jury didn't find O.J. guilty. He had been a star NFL running back, and he was an enormously popular public figure. The LAPD, which O.J.'s lawyers put on trial, was as unpopular as O.J. was popular, and demonstrably racist to boot. The prosecution had been as ham-handed as Simpson's "dream team" was highly skilled. The verdict amounted to jury nullification, according to some legal experts.

This time, it's the House managers, acting as prosecutors, who have been skilled in their presentation of largely irrefutable evidence against Trump, and the defense that has been, to this point anyway, clumsy and ineffective.

But none of it matters. Donald Trump once said he could shoot someone in the middle of Fifth Avenue and get away with it. He was right. Now we're going to learn that he can kill the Constitution and leave his bloody fingerprints all over it, and the supine Republicans in the Senate will let him get away with it. Donald Trump truly is the O.J. of American politics.