Follow the money on impeachment: Trump bought off the jury — and hints at bigger tax cuts 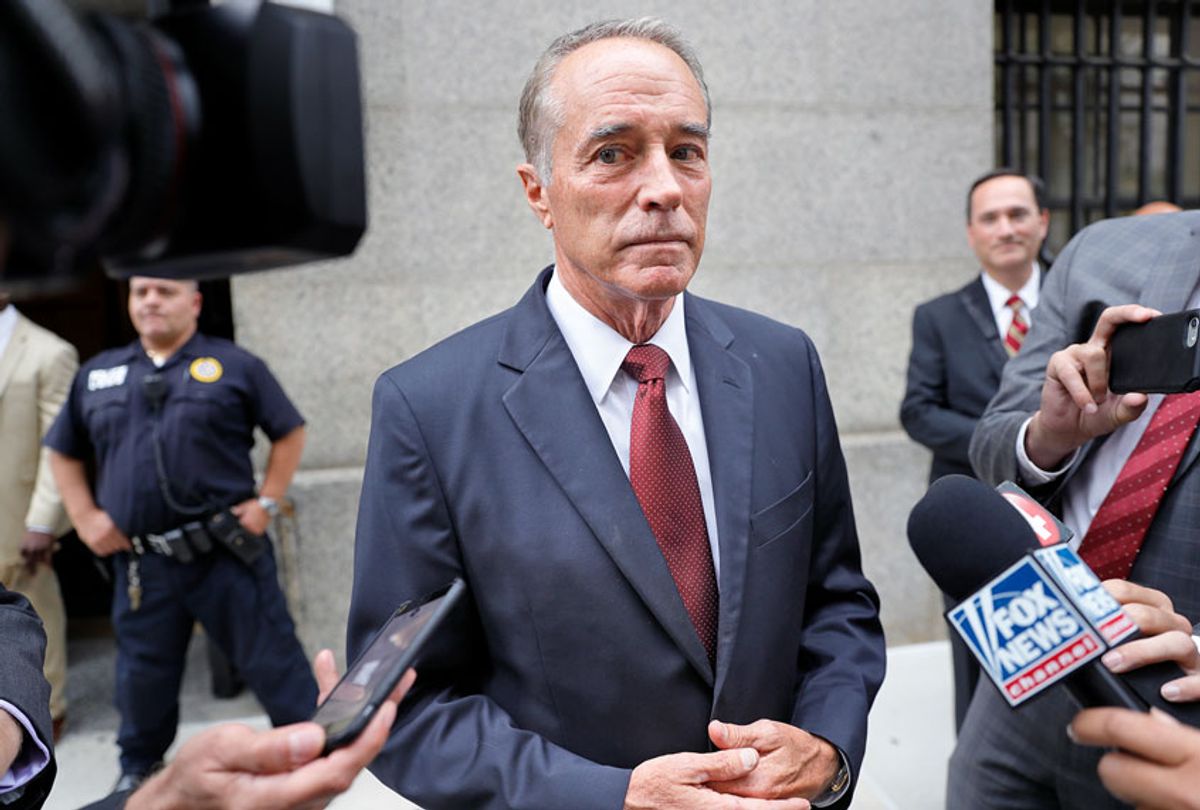 U.S. Rep. Chris Collins, R-N.Y., speaks to reporters as he leaves the courthouse after a pretrial hearing in his insider trading case, in New York. Lawyers for the ex-U.S. congressman say he is humbled and remorseful after pleading guilty to conspiracy in an insider trading scheme and should face no time behind bars. Sentencing is set for Jan. 17. (AP Photo/Seth Wenig)
--

It's long been obvious that Republican senators have little interest in serving as impartial jurors in the impeachment trial of Donald Trump. While there is a raft of motivations for such historic perfidy — with several GOP senators politically benefiting from some of the same corrupting influences — one under-examined, non-Russian reason is personal greed.

A new report reveals that the 2017 GOP tax law was rife with monumental self-dealing by rich GOP lawmakers who have since benefited bigly. According to a Center for Public Integrity analysis, several Republican members of Congress directly cashed in on the multibillion-dollar windfall from the corporate tax cuts the GOP pushed through on a party-line vote. With the lowest effective tax rate in the last 40 years, America's largest corporations proceeded to pour $1 trillion not into increased wages for workers but buybacks of their own stocks, causing stock prices to soar. Coincidentally, many Republican lawmakers who voted for the largest tax cut signed into law by Trump personally owned some of the same stocks whose values significantly increased as a result.

At least seven Republican senators owned stocks in companies that spent billions on buybacks, resulting in great personal profit, according to the Center for Public Integrity. The report came on the same day that former New York Rep. Chris Collins, who was the first sitting GOP congressman to support Trump's 2016 presidential campaign, was sentenced to 26 months in prison for insider trading.

It is no wonder why Republicans insisted on ramming through incredibly unpopular tax cuts for American corporations that were already making near-record profits, even at the risk of losing control of the House of Representatives. Of course, billionaires and corporations that reaped millions of dollars from the GOP tax cuts pumped some of that windfall into Republican campaigns, allowing Sen. Mitch McConnell, R-Ky., to retain control of the Senate. With that, Trump's fate in a Senate impeachment trial was all but sealed.

While the report is a less than shocking look into the kleptocratic ways of the modern GOP, it shows that the transactional core of the 2017 tax cuts has ramifications far beyond the $1.8 trillion increase in the national debt. Republican senators in purple states, like Ron Johnson of Wisconsin and David Perdue of Georgia, have personally reaped hundreds of millions from the tax law and are repaying the president by serving as his impeachment propaganda machine rather than impartial jurors — even as half of registered voters and a majority of independents in a Fox News poll released on Sunday said the Senate should convict Trump.

Now, in addition to running defense for Trump, McConnell's repeating Trump's empty promises of a middle-class tax cut in an election year.

"We're talking a fairly substantial … middle-class tax cut that'll be subject to taking back the House and obviously keeping the Senate and keeping the White House," Trump told the Wall Street Journal during an interview at the World Economic Forum in Davos, Switzerland, last week. He promised a plan would be revealed in 90 days.

Before the 2018 midterms, Trump actually admitted that his tax bill was never aimed at cutting middle-class taxes, promising to actually deliver in 2019. "We're putting in a resolution some time in the next week and a half to two weeks [and] we're giving a middle-income tax reduction of about 10 percent," Trump told reporters at the time.

The first Republican rule of "middle-class tax cuts" is to speak about them but never actually pass them. They've been pulling the same bait-and-switch since at least 1980. But while they were cutting taxes for the rich and corporations, the GOP left in place the income taxes a majority of seniors pay on their Social Security income. Now they are again touting cuts to Medicare and Social Security to cover the payoff they gave to themselves.

"The president directed me to produce what we're calling tax cuts 2.0," senior White House economic advisor Larry Kudlow explained last week. "It will be published sometime during the campaign, as a message for future Trump economic growth policies, [with] particular emphasis on the middle class, in his second term. ... We are looking at a variety of tax cuts, sometimes making permanent some existing tax cuts, some existing corporate tax cuts."

That last part gives the game away. The promise of continued corporate tax cuts is how Trump builds his 2020 election war chest from the super-rich and buys the continued allegiance of Republican impeachment jurors, even in the face of ever more damning evidence of his public corruption.