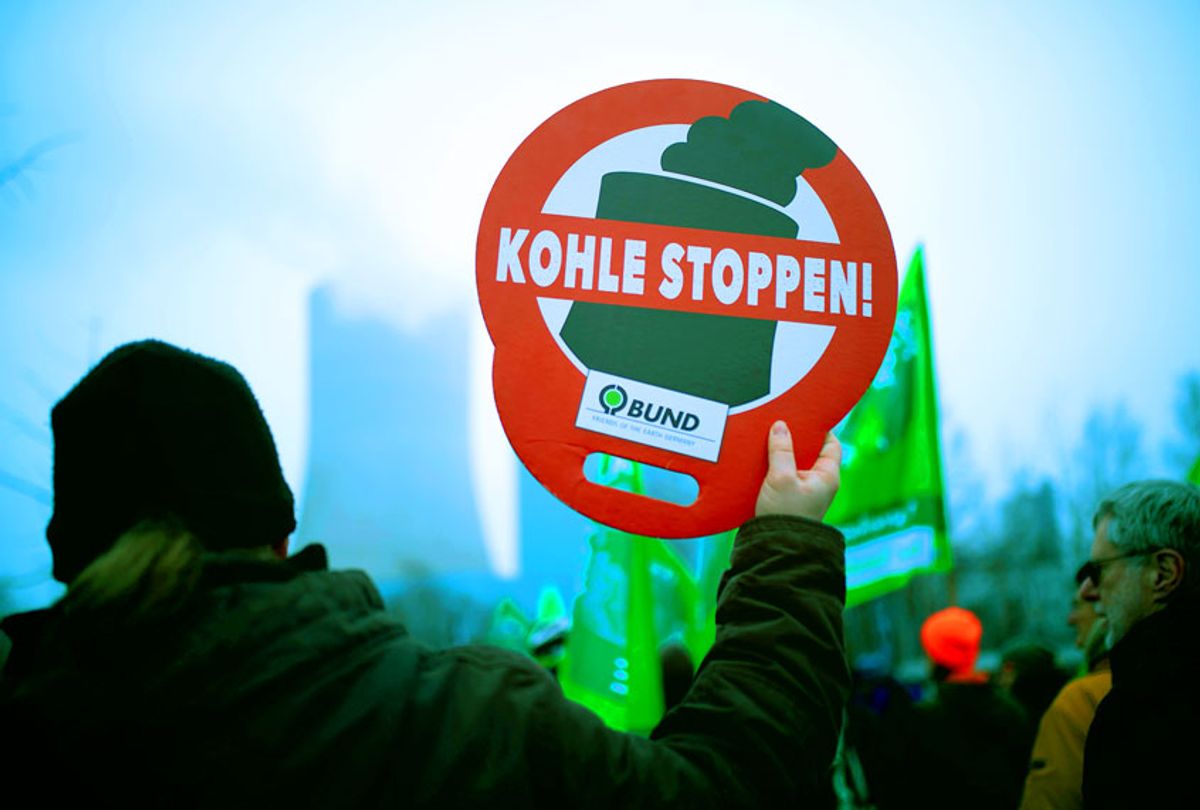 A supporter of Fridays for Future movement holds a placard reading "stop coal" during a demonstration against the commissioning of the coal-fired power plant Datteln 4 in Datteln, western Germany on January 24, 2020. (INA FASSBENDER/AFP via Getty Images)
--

First, the German government announced that moving beyond coal would cost the nation $44 billion in out-of-pocket expenses, and would take 18 years.

Second, German policy makers were reported in a quandary. Should they take their lead from the U.S. and reject engagement with the Chinese telecom firm Huawei for Germany's 5G mobile network? That would be a defensible decision for reasons of security and European competitiveness, but would risk Chinese ire and loss of access to the world's largest auto market.

Both of these episodes, depending on how they come out, could significantly hamper decarbonization of the German economy, and even global climate progress — but they illustrate the complexity of the energy transition. Combined, they capture both halves of the challenge facing countries trying to accelerate the transition to clean energy. They must somehow overcome the interests — and dependence — of the fossil-fuel-invested sectors of their current economies. They must simultaneously make themselves competitive in the quite different future world of clean and renewable energy.

Revealingly, neither of Germany's dilemmas result from clean, decarbonized energy costing too much — so neither would be significantly resolved by, say, robust carbon taxes.

Let's begin with Germany's power sector transition. Germany needs to pour $44 billion into retiring its remaining coal fleet, not to pay for wind and solar, which will be cheaper than retiring coal, but on "compensating workers, companies and the four coal producing states" that will be left behind. That challenge is also why Germany is planning to take 18 years to finish the transition — which will seriously undermine the EU's ability to meet its climate goals. Renewables are cheap and available, but they strand too many workers and communities.

The Huawei dilemma is the flipside. Alienating Beijing could lead it to squeeze German automakers out of their valuable niche in the Chinese auto market, which is the world's largest, especially for the low-carbon, electric vehicles of the future on which companies like VW and BMW are betting billions.

The question of how a capitalist system should manage the hard truth that rapid innovation means accelerated depreciation of capital investments has barely received notice from the world's economists.

The recent history of wind, solar and batteries suggests that the winners are not the technology pioneers, but those who get access to the first big markets. China, not the U.S., now dominates solar-panel manufacturing because when Germany first scaled solar, it was the Chinese who created the biggest market while the U.S. dithered.

Capturing the electric auto markets of the future is key if Germany is to avoid a costly and divisive shrinking of its auto industry in the wake of pending coal retirements. For nations to replace the jobs lost as yesterday's fossil industry shrinks, they must capture the new jobs and economic growth of the low carbon future — but doing so means accelerating market change and writing coal, oil and gas assets off more quickly.

The Huawei dilemma is rooted in the truth that the Chinese currently have the world's biggest national auto market — and  focused it on vehicle electrification. But Europe and North America combined have an even bigger regional market. If they were vigorously collaborating to electrify that market, they could drive the world away from Huawei — if that is in our collective interest, as seems likely.

But thanks to Donald Trump, not only is the U.S. not collaborating with Canada and Europe to leverage the world's biggest auto market, we are splintering our own domestic market in a fight between the Trump administration and the state of California, thus rendering Detroit steadily less competitive. Our government is actually trying to lag, not lead, when it comes to the automotive technologies of the future.

We need new thinking about how to manage a future of more rapid technological innovation. This unavoidably means that more and more of yesterday's investments become outmoded faster than regions, communities, companies and workers are used to adjusting. As a new innovation emerges it makes money replacing an old one. But in doing so it strands not just the companies invested in the now outmoded incumbent, but also their entire supply chains: workers, communities, companies and shareholders. This can affect entire regions: Imagine North Dakota if there were suddenly no market for Bakken oil!

And imagine also the political reality, that the incumbent technology has enough political clout  to obstruct and slow down the market growth of the newcomer — say, by preventing regulatory changes which allow for the differences between renewables and coal and gas.

Finally, consider the existential urgency to speed up the transition from old fossil to new renewable energy. Why not use a share of the profits of the new renewable option to compensate the fossil supply chain for its lost market share and more rapid capital stock retirement? Effectively, that would provide insurance against too rapid technological change.

But this is not how we usually think about economic change. Rapid technological change as a socially insured risk hasn't been part of our concept of capitalism. Nor is the vision of government as a nurturer and creator of the markets for innovative new products whose profits will pay for the premiums on that insurance. Joseph Schumpeter warned of capitalism's "creative destruction," but even he didn't imagine that the security of human civilization might depend on speeding up that destruction, and doing that might require compensating the stakeholders in the old order which is being replaced.

Germany, whose political dialogue is unencumbered by climate denialism, is thus testing new ground which will be vital for all of us. Remember, the problem is not the cost of clean energy, but the embedded investment in fossil fuels. How we bring negatively impacted communities along as we accelerate toward clean, low-carbon energy is perhaps the biggest question that faces us in the climate-changed future.