The amazing brain cells that link mind and body

In “The Angel and the Assassin,” Nakazawa shows how tiny cells called microglia shape our neural circuits 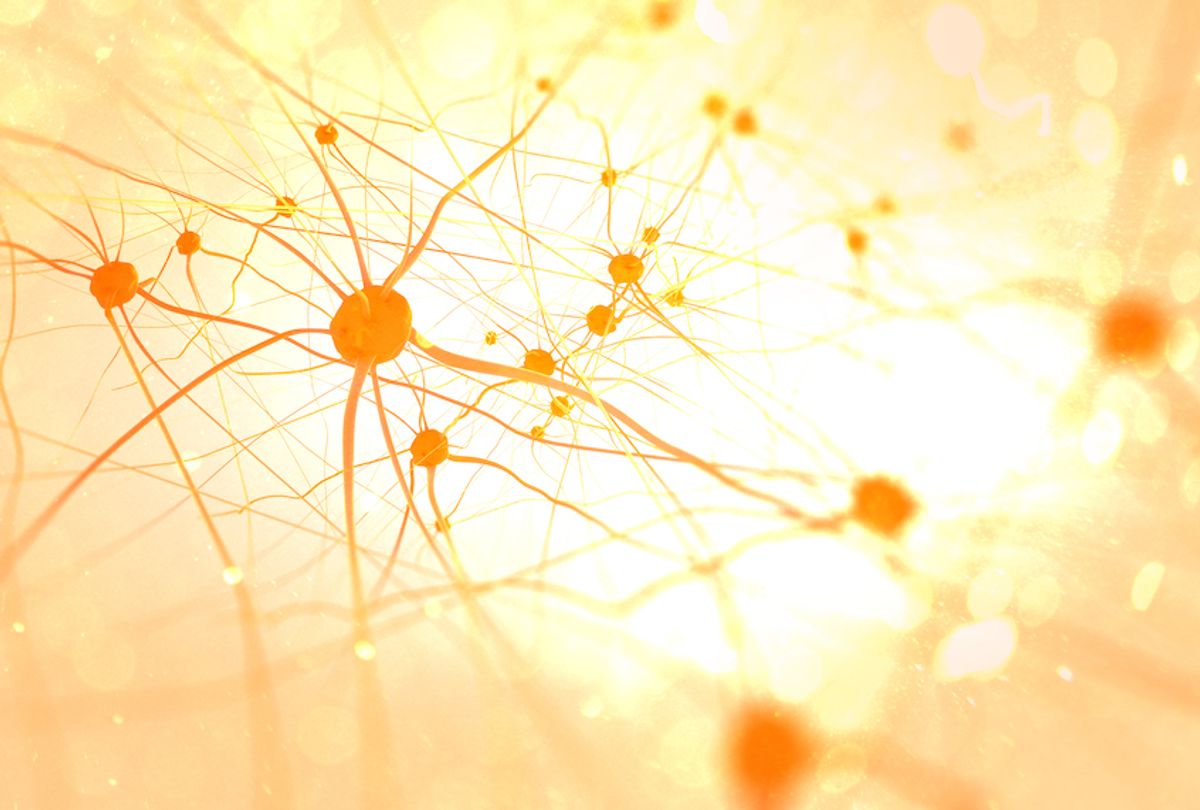 Nearly two decades ago, Donna Jackson Nakazawa's immune system launched a misguided attack on her own body. Her white blood cells — which typically fight off invading pathogens — went to war against her nerves, destroying the layer of fatty insulation that helps nerve cells transmit their signals. Nakazawa, a journalist and author, had Guillain-Barré syndrome, a rare autoimmune condition that caused muscle spasms and left her temporarily unable to walk.

But alongside these physical symptoms, she also began to feel as though something had gone amiss in her mind. She developed severe anxiety and began experiencing troubling memory lapses, even forgetting how to tie her daughter's shoes. "I could not shake the feeling that just as my body had been altered, something physical had also shifted in my brain," Nakazawa writes in her new book, "The Angel and the Assassin: The Tiny Brain Cell That Changed The Course of Medicine."

At the time, doctors couldn't really explain what was happening to her. Scientists had long believed that the brain was "immune privileged," walled off from the peripheral immune system. There wasn't an obvious way for her overactive white blood cells to be causing her cognitive symptoms.

But over the last decade researchers have made a series of stunning discoveries that overturned this long-accepted dogma. The findings revolve around tiny, long-overlooked brain cells known as microglia, which serve as the brain's own immune system and turn out to play a critical role in shaping neural circuits. "The Angel and the Assassin" is an illuminating look at these underestimated cells and how they might remake medicine.

Nakazawa writes with refreshing clarity about two extremely complex fields — immunology and neuroscience — and vividly explains what's at stake, interweaving the stories of the scientists who are shedding light on microglia and the patients whose lives could be changed by their work. As Nakazawa explains, "We stand at the cusp of a sea change in psychiatry: an enormous paradigm shift that cuts across all areas of medicine, and promises to rewrite psychiatry as we know it — based on the novel understanding that microglial cells sculpt our brain in ways that have profound lifelong effects on our mental health and well-being."

In the brain's cellular chorus, neurons, which send and receive electrochemical signals, have long been considered the stars. The other cells in the brain, collectively known as glial cells, were relegated to the supporting cast. "Glial cells made up the B-team; they catered to the needs of neurons the way an entourage caters to the whims of a movie star," Nakazawa writes.

And of the several types of glial cells in the brain, perhaps none seemed less inherently interesting than microglia. Microglia were the brain's clean-up crew. They kept an eye out for injury and infection, clearing away pathogens, malformed proteins, and dead cells. "They were the brain's humble trash men," Nakazawa writes. "Robot-like housekeepers. End of story."

But as imaging technology improved in the early 21st century, scientists began to take a closer look at precisely what microglia were doing. They noticed that microglia were not just sitting by idly, waiting to be called into action — instead, they were highly pro-active. "Beneath the high-resolution microscope, individual microglia resembled elegant tree branches with many slender limbs," Nakazawa writes. "Their branches swirled around and around through the brain, exploring and searching for the slightest sign of distress."

Researchers would soon make an even more surprising discovery. Neuroscientists knew that the developing brain made far more synapses, or connections between neurons, than it needed; as the brain matures, it eliminates the extraneous connections. But it wasn't clear precisely how this synaptic pruning happened until 2012, when neurologist Beth Stevens and her colleagues reported something astonishing: Microglia were engulfing the excess synapses, especially the underused ones.

It's a crucial task. By eliminating weak and idle synapses, microglia facilitate healthy brain development. But Stevens and other scientists also began to consider what might happen if this process went awry, the same way that white blood cells sometimes erroneously assail healthy tissues. Perhaps, Nakazawa writes, "like white blood cells, microglia didn't always get it right. What if, instead of just pruning away damaged or old neurons, microglia were sometimes mistakenly engulfing and destroying healthy brain synapses too?"

Many mental illnesses and neurological conditions, from Alzheimer's to depression, are accompanied by synapse loss or dysfunction. Could overactive microglia be responsible?

A rapidly expanding body of research suggests that the answer is yes. Researchers have found, for instance, that people suffering from depression have elevated levels of activated microglia and that, as Nakazawa puts it, "the longer that depression went untreated, the more havoc microglia wreaked in the brain." Microglia have now also been implicated in Alzheimer's disease, autism, Huntington's disease, obsessive-compulsive disorder, Parkinson's disease, schizophrenia, and other conditions.

Microglia could also explain why some people with auto-immune diseases, like the Guillain-Barré that struck Nakazawa, sometimes report curious cognitive symptoms. Several years ago, scientists discovered lymphatic vessels, which ferry white blood cells around the body, in the protective membranes that encase the brain. These vessels could serve as a direct link between the peripheral immune system and the brain — a link that experts long insisted did not exist.

That means that when the body's immune response ramps up, it could conceivably send signals through these lymphatic vessels, triggering microglia to go on the attack.(In addition to engulfing synapses, activated microglia can also churn out compounds that cause neuroinflammation, damaging healthy neurons and brain tissue.) Scientists have found that all sorts of things, from infections to chronic stress, can trigger microglia to go rogue, and they've documented microglial abnormalities in people with a number of immune-related disorders, including lupus, multiple sclerosis, and Crohn's disease."This means that the long-held line in the sand between mental and physical health simply does not exist," Nakazawa writes.

These discoveries open up new treatment opportunities, and Nakazawa writes that scientists are now investigating an array of strategies, some more unconventional than others, "to help calm overreactive microglia so that they behave as nature intended: as the angels of the brain, rather than as blind assassins." She follows several patients as they pursue some of these experimental treatments, including Katie, who hopes that transcranial magnetic stimulation will alleviate her depression and panic disorder, and Lila, who has Crohn's disease and obsessive-compulsive disorder and is trying a "fasting-mimicking diet" designed to dial down immune activity. Other researchers are exploring immunotherapy, neurofeedback, vagal nerve stimulation, and even hallucinogens.

The possibilities are genuinely exciting, and it's tempting to believe that scientists have finally cracked the code for a vast array of enigmatic and intractable conditions. But there's still a lot we don't know about microglia, and we should be careful about getting ahead of ourselves — or imbuing a single cell with too much explanatory power.

"If we overemphasize the workings of microglia, and the biological mechanisms by which illnesses of the brain emerge," Nakazawa writes, "we invite the kind of biological reductionism that overmedicalizes and belittles the intimate connection between the mind and the way it gives birth to our human consciousness."

Beyond that, our bodies and brains are immensely complex, and microglia are just one piece of an intricate physiological system. (Despite her own words of caution, however, Nakazawa can sometimes be too hyperbolic, as when she asserts, "This tiny cell, the power of which science overlooked for so long, plays some role in every story of human suffering.")

But she also makes a compelling case that our new understanding of microglia has already been transformational. "Newly categorizing psychiatric and neurodegenerative disorders as also being disorders of microgliopathy and the immune system is useful for furthering research and understanding," she writes.

For too long, she argues, we have viewed mental illnesses and neurological disorders as entirely separate from — and, in some ways, less "legitimate" than — diseases of the rest of the body. If the new research on microglia helps upend that assumption, that, in and of itself, would be worth celebrating.