Most neutrinos are created inside stars. Why are these coming from inside Earth? 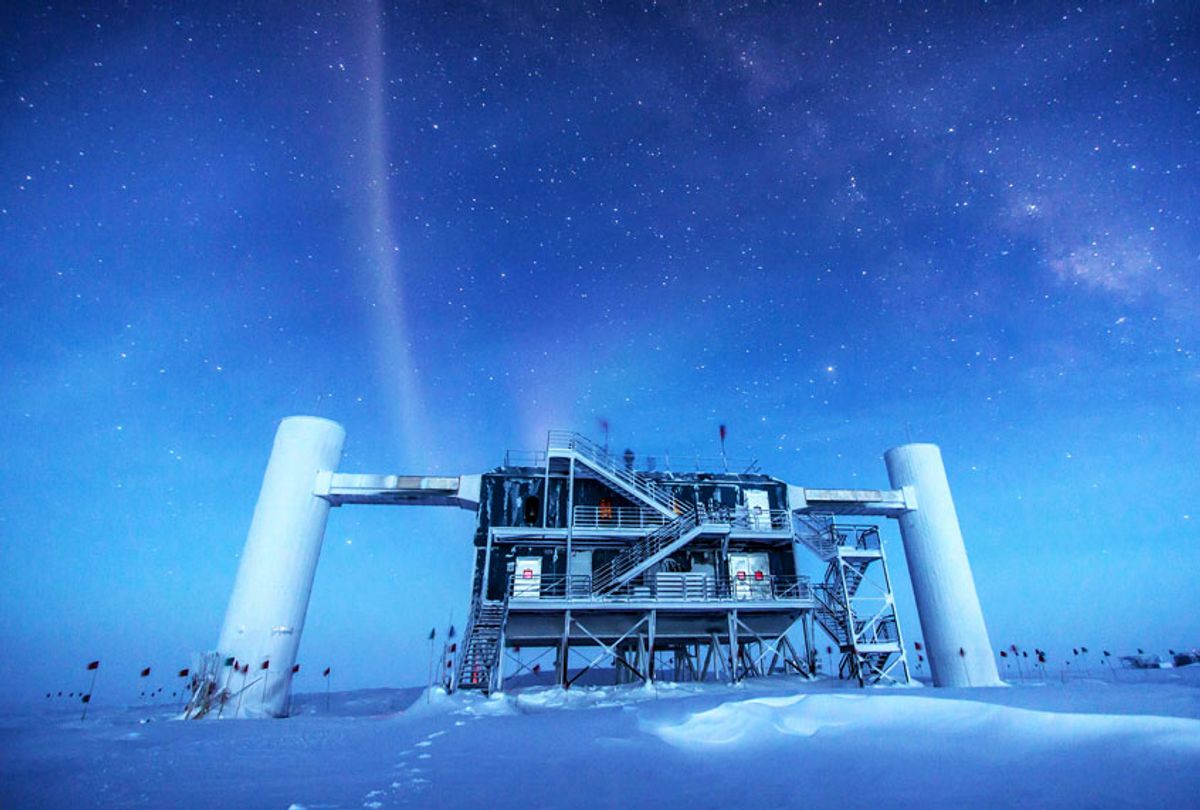 The IceCube Laboratory at the Amundsen-Scott South Pole Station, in Antarctica, hosts the computers collecting raw data. Due to satellite bandwidth allocations, the first level of reconstruction and event filtering happens in near real time in this lab. Only events selected as interesting for physics studies are sent to UW–Madison, where they are prepared for used by any member of the IceCube Collaboration. (Felipe Pedreros/IceCube/NSF)
--

A new research paper published this month shines a light on a mystery in Antarctica that is perplexing physicists: high-energy neutrinos with an unknown origin. The odd properties of these outlier neutrinos could hint at their origin in a yet-unseen unknown particle. Equally exciting, their detection could also mean that the standard model of particle physics, which has reigned supreme for decades, may need revising.

There are multiple detection projects in Antarctica currently studying neutrinos, a type of fast-moving particle that is created prolifically within stars, yet which only rarely interact with quotidian matter as we know it. The IceCube Neutrino Observatory is a telescope that studies neutrinos that pass through its 5,160 optical detectors buried deep in Antarctic ice. In addition to the IceCube experiment, there is also ANITA (the ANtarctic Impulsive Transient Antenna), a balloon that flies over the continent and points radio antennae toward the ground. Both IceCube and ANITA are designed to search for radio waves that originate in high-energy neutrinos colliding with the solid matter that comprises the ice.

After investigating an ANITA claim that it detected two events that appear to be signals of extremely high-energy neutrinos, researchers outline their investigation in a paper published in The Astrophysical Journal. Defying our understanding of neutrinos, the researchers could not determine a source of origin. The researchers said in the paper that different possible explanations for the signals must be considered.

Avi Loeb, chair of Harvard's astronomy department, explained to Salon via email that the results are certainly an anomaly.

"The events detected by ANITA certainly appear anomalous because they cannot be explained as neutrinos from astrophysical sources," Loeb said. "The new paper shows that such neutrinos would have generated showers of lower-energy neutrinos that were not detected by IceCube. If so, what is the trigger of these events? We do not know."

Loeb added: "It could be some type of particles that interact more weakly than neutrinos with ordinary matter. We suspect that such particles exist in the form of dark matter. But what would make the ANITA events so energetic?"

Indeed, astronomers are still in the dark. Loeb said more information is needed before deciding where the solution lies.

According to the paper, when ANITA reported signals, they looked like they had arrived at an angle, suggesting they had just traveled through most of the planet. That is odd behavior for neutrinos.

"It's commonly said that neutrinos are 'elusive' or 'ghostly' particles because of their remarkable ability to pass through material without smashing into something," Alex Pizzuto of the University of Wisconsin–Madison, one of the leads on this paper, said in a press release. "But at these incredible energies, neutrinos are like bulls in a china shop — they become much more likely to interact with particles in Earth."

This is not the first time high-energy particles have perplexed researchers. In 2010, scientists discovered two spherical plumes of high-energy particles spewing from the Milky Way's galactic center, known as  "Fermi Bubbles." These strange bubbles were on the core of the Milky Way galaxy, but extended above and below the Milky Way galaxy for 25,000 light-years. Interestingly, they emitted high amounts of high-energy radiation. In a separate paper published in The Astrophysical Journal last year, researchers at The IceCube Neutrino Observatory (IceCube) said that after years of intense data examinations and collection, they weren't sure what first caused these bubbles.

Loeb said that these kinds of anomalies can lead to new discoveries in physics.

"Breakthroughs in physics often occur through the discovery of anomalies," Loeb said. "Since science is a learning experience, it would be most prudent to propose new experiments beyond ANITA and IceCube that that would provide us with this missing information.

As far as even speculating the source of the origin, Loeb said he "would not dare guess," because Mother Nature "is often more imaginative than we are."