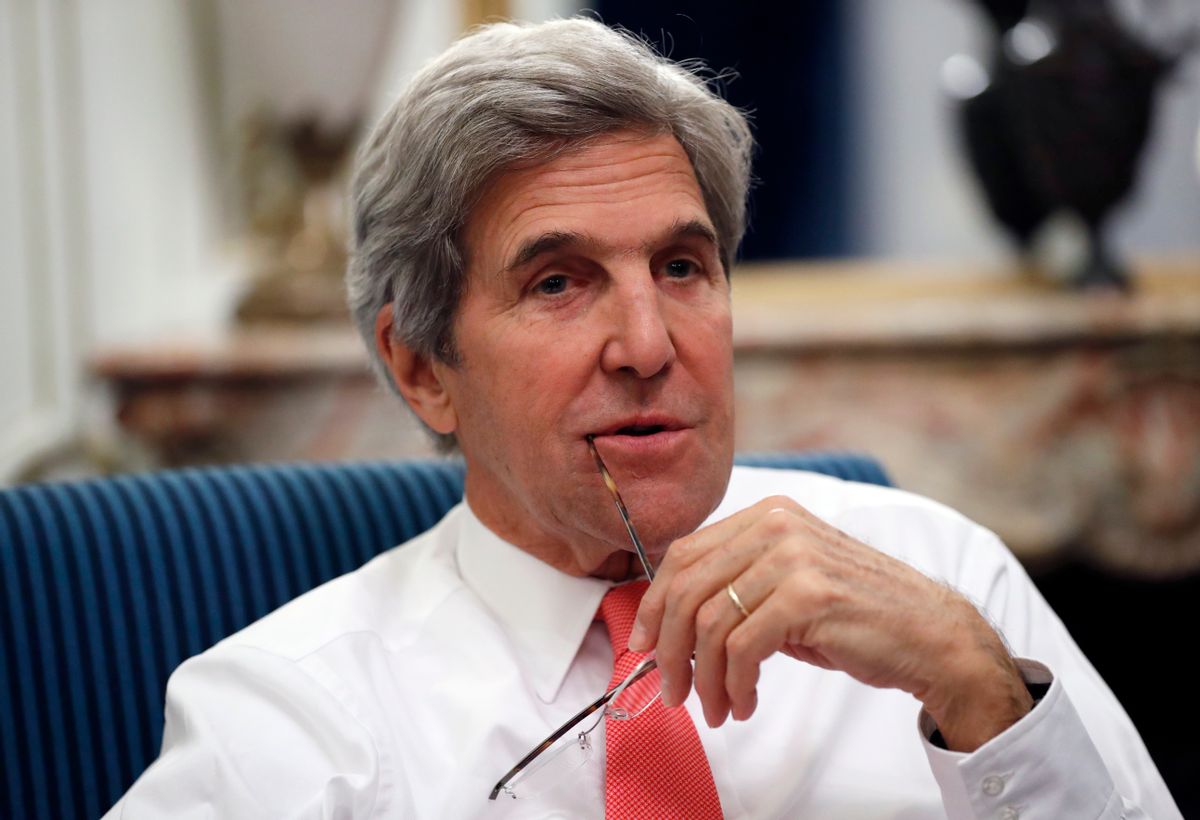 FILE - In this Jan. 15, 2017 file-pool photo, Secretary of State John Kerry speaks with the media in Paris. Defying Republican opposition, officials say the Obama administration in its waning hours quietly released $221 million to the Palestinian Authority that GOP members of Congress had been blocking. The official said John Kerry had informed some lawmakers of the move shortly before he left the State Department for the last time on. (AP Photo/Alex Brandon, Pool, File) (AP)
--

Former Secretary of State John Kerry denied planning a late presidential bid after he was allegedly overheard talking about mounting a run out of concern over the rise of Sen. Bernie Sanders, I-Vt., rise in recent polls.

Kerry denied an NBC News report that he was discussing what he would need to do to jump in the race amid "the possibility of Bernie Sanders taking down the Democratic Party — down whole."

NBC News analyst Jonathan Allen heard Kerry on the phone at the Renaissance Savery Hotel in Des Moines, Iowa, explaining that he would have to step down from his seat on the board of Bank of America and stop doing paid speeches if he were to run.

"Maybe I'm f*cking deluding myself here," he said according to the report, before suggesting that donors like venture capitalist Doug Hickey would need to "raise a couple million."

The reported comments came as Kerry was in Iowa to campaign for former Vice President Joe Biden, who remains the national frontrunner but trails Sanders in most recent polls in the early states of Iowa and New Hampshire.

The Biden campaign denied to NBC News that they were concerned Kerry would launch his own bid.

"Everyone knows that John Kerry is all in for us," Biden adviser Symone Sanders told the outlet.

Kerry, who lost his 2004 presidential bid to George W. Bush, denied on Twitter that he was considering another run, writing that "any report otherwise is f*cking (or categorically) false."

He later deleted the tweet and replaced it with a more family-friendly version.

"I am absolutely not running for president," he wrote. "I've been proud to campaign with my good friend Joe Biden, who is going to win the nomination, beat Trump, and make an outstanding president."

Kerry told NBC News that his comments were misinterpreted.

"This is a complete and total misinterpretation based on overhearing only one side of a phone conversation," he said. "A friend who watches too much cable called me wondering whether I'd ever jump into the race late in the game if Democrats were choosing an unelectable nominee. I listed all the reasons I could not possibly do that and would not — and will not under any circumstances — do that."

Kerry said last month that he was committed to backing Biden when he was asked if he regretted not jumping into the 2020 race himself.

"I'd be a liar if I didn't say I don't come out here and have fun and your juices don't get going," he said at the time. "But right now, they're entirely focused on helping Joe Biden become president, and I'm very happy doing what I'm doing."

Iowa reporters questioned why Kerry would have the discussion within earshot of journalists at a hotel populated with folks in town for Monday's Iowa caucuses.

"I don't know who needs to hear this, but the lobby of the Renaissance Savery in Des Moines the day before the Iowa caucuses is *not* the place to have private conversations," tweeted Des Moines Register reporter Brianne Pfannenstiel.

Author Naomi Klein suggested that Kerry's concern, while discussing his Bank of America position and paid speeches, was not that Sanders would be unelectable but the opposite.

"Don't believe establishment Dems who claim they are panicked because Bernie will lose in the general. What they are actually panicked about is that he will win," she wrote on Twitter. "Also: In 2004 Kerry lost to a despised president mired in an illegal war - he isn't riding to anyone's rescue."