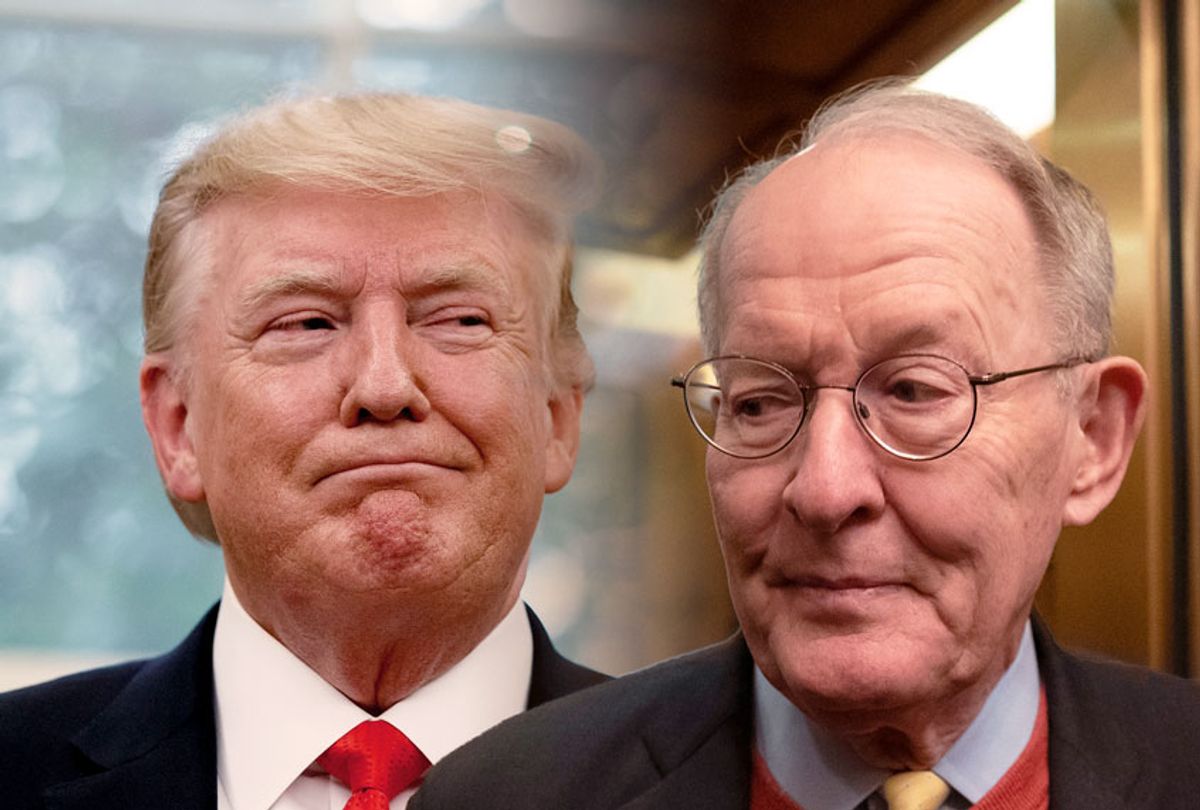 Good old Lamar! That would be Sen. Lamar Alexander, Republican of Tennessee — known for that exclamation point after his name, his plaid shirts and his quixotic presidential campaigns. Well, Lamar! threw his reputation and legacy into the fetid compost heap of Donald Trump's presidency last Friday. Alexander is retiring after this term, so I guess Republicans figured he was the most expendable human sacrifice to step into the breach and betray his oath by casting the deciding vote refusing to hear witnesses in the president's impeachment trial.

I'm not sure why anyone expected him to do anything else. Alexander is known to be Majority Leader Mitch McConnell's BFF in the Senate, and McConnell's entire strategy for the trial was to cover up as much as possible and get the whole thing over with as quickly as possible. The idea that enough Republican senators would have an attack of conscience, or even the rationality and decency, to call for witnesses in a trial was always a long shot. And frankly, Alexander was one of the longest shots of all.

I think the media got caught up in some of Alexander's myth as the protégé of former Sen. Howard Baker, another Tennessean who's been lauded as one of the Republicans who pushed Richard Nixon to resign back in 1974. As I've written here before, Baker's reputation for rectitude was overblown. Early in the Watergate scandal, Baker was the back-channel conduit between the Nixon White House and the Senate Watergate Committee, working secretly on his behalf. The committee's strategy was to question lower-level staffers first and then move up the ladder. Baker's vaunted line about "What did the president know and when did he know it?" was actually designed as a cover story for Nixon, asked of people who weren't in a position to know and giving the impression that while all this skulduggery was happening the president was out of the loop.

As we know, Baker later changed his tune when the evidence became overwhelming and happily accepted the plaudits for his alleged courageous patriotism, knowing all the while that he had actually been Nixon's accomplice through much of the investigation and his famous question was actually part of a strategy to help the president.

Baker's Washington Post obituary in 2014 opened this way: "Former senator Howard H. Baker Jr. of Tennessee, who framed the central question of the Watergate scandal when he asked, "What did the president know, and when did he know it?" Lamar Alexander isn't going to be so lucky. His perfidy is right out in the open. And unlike his mentor, Alexander didn't come around in the end. He sealed Trump's acquittal.

Of course, Alexander is trying to have it both ways. He explained that while Trump's misdeeds had been thoroughly proven, the president's actions had merely been "inappropriate" rather than impeachable, and therefore the Senate didn't need to hear anything more.

He later made it clear that he planned to vote for Trump this year, telling the New York Times:

Whatever you think of his behavior. With the terrific economy, with conservative judges, with fewer regulations, you add in there an inappropriate call with the president of Ukraine, and you decide if you prefer him or Elizabeth Warren.

A few other senators clearly wanted to jump on Alexander's bandwagon, laboring under the misapprehension that they too will be rewarded with Howard Baker-like kudos for their wishy-washy attempt to rationalize their behavior.

The once and future "reasonable Republican," Sen. Ben Sasse of Nebraska, was a particular profile in courage:

Sen. Marco Rubio of Florida, a onetime Trump primary opponent, took Alexander's tortured rationale even further, admitting that what Trump did was impeachable but declaring that an overtly partisan impeachment is a bad thing. Rubio apparently failed to notice that his vote for removal would make it bipartisan.

On Sunday, Alexander doubled down in an appearance on "Meet the Press." It was not flattering to him or the president:

He didn't know what to do? Trump had just gone through the whole Mueller investigation, which was all about the strange coincidence that his campaign was crawling with people associated with a foreign power that was actively interfering in the election campaign. Alexander also fails to acknowledge that Trump called Zelensky the day after Mueller testified before Congress. Trump even mentioned that in the call, no doubt to show the Ukrainian president that he was home free. It's always ridiculous to infantilize this president in this way, but in this instance it's mind-boggling.

Anyway, Trump does a good job of that all by himself:

This is a cover-up in plain sight. During the trial itself we had the leaked book excerpts from former national security adviser John Bolton, making clear that the president and his lawyers were lying to the American people.

To put an even finer point on it, on Friday night CNN reported this:

The Department of Justice revealed in a court filing late Friday that it has two dozen emails related to President Donald Trump's involvement in the withholding of millions in security assistance to Ukraine — a disclosure that came just hours after the Senate voted against subpoenaing additional documents and witnesses in Trump's impeachment trial, paving the way for his acquittal.

That was the first time the administration has acknowledged that those emails existed.

The revelations in the Bolton book and these hidden emails being ignored by Republican senators is the equivalent of Walter Cronkite obtaining the "smoking gun tape" from Nixon's Oval Office recordings, and Howard Baker and the boys deciding they didn't need to hear it. They could then have concluded that even though Nixon had run an entire criminal operation from the White House, it was worth removing him because he had also done some things they really liked. (In fact, Nixon had some actual achievements, which is more than you can say for the current president.)

Everyone acknowledges that impeachment is a political process. If senators can take Trump's so-called record into account as a positive side, then they certainly could have taken into account all the rest of Trump's crimes. From obstruction of justice to epic-scale corruption to an administration rife with cronyism and nepotism, they know what he is. Republicans had a chance to break from him, at least symbolically, and send a message by hearing witnesses even if they weren't going to convict him. They had a chance to make a statement that the Republican Party does not endorse this president's criminality. They didn't do that.

Republicans aren't just covering up for Trump's inept Ukraine plot. They are now full accomplices in everything he has already done and everything he will certainly do in the upcoming presidential campaign.