Donald Trump claims he cares about corruption in Ukraine . . . but not Hungary and Turkey? 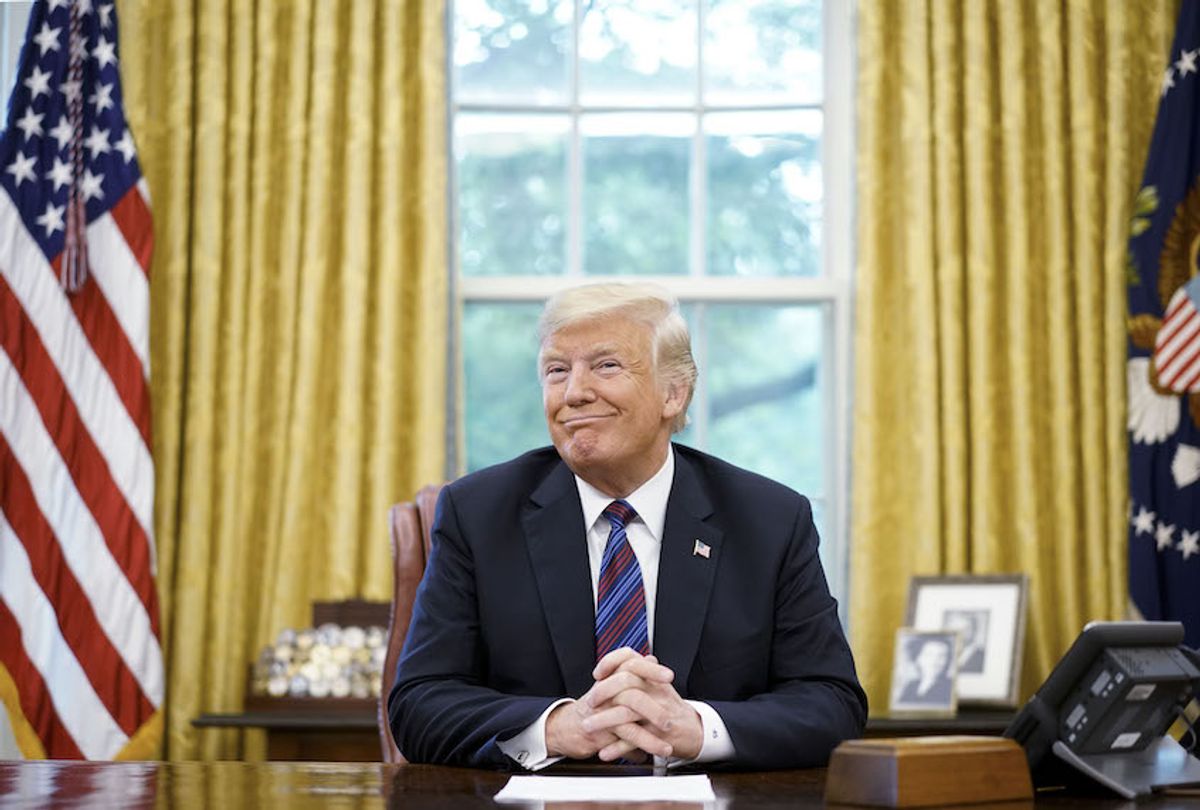 Donald Trump claims that he refused to meet with Ukraine's new President, Volodymyr Zelensky, last summer and decided to hold up $391 million of military aid for one very straightforward reason: He is gravely worried about corruption in Ukraine.

By comparison, he really doesn't care about getting "dirt" on Joe Biden from the Ukrainian authorities.

Really? Look at what else was going on while Mr. Trump was refusing to meet Zelensky. In May 2019, he was delighted to welcome Viktor Orban, the Hungarian Prime Minister, to the White House.

Indeed, Trump's White House meeting with Hungary's corrupt Orban took place just one week before Zelensky's inauguration as the new reformist Ukrainian President on May 20, 2019. Putin must have been delighted that Trump would see Orban — but not Zelensky.

And in November 2019, he welcomed Recep Tayyip Erdogan, the Turkish President, to 1600 Pennsylvania Avenue. It evidently didn't bother Donald Trump one bit that both men run deeply corrupt regimes.

Orban and Erdogan are also profoundly authoritarian, while Zelensky is a democratic politician with a reform agenda. But that didn't seem to matter to Trump, either.

The facts from Transparency International

That's pretty far down the totem pole. Transparency International, based in Berlin, ranks 180 countries, with Denmark as the best and Somalia the worst. (The United States is ranked 23rd, by the way, the same rank as France and slightly above Chile).

The rotten state of Orban's Hungary

What matters particularly is that Hungary and Turkey have become more corrupt in recent years, according to Transparency International. The two countries' corruption ratings have declined because both Messrs. Orban and Erdogan have eliminated a formerly free press and an independent judiciary.

As a result, there is less scrutiny of government officials — something that Donald Trump also longs for deeply. That lack of scrutiny has made it easier for Erdogan and Orban to enrich their cronies through sweetheart deals.

In Orban's case, important backers have received large amounts of land, which often entitles them to generous agricultural subsidies from the European Union. The government has also awarded many construction contracts to the prime minister's friends without competitive bidding.

Mr. Orban has also been adamant about destroying the free press in Hungary. Government advertising is an important source of revenue for Hungarian media. Orban simply cut off this source of funding for independent (= critical) newspapers and radio and TV stations.

Most owners were forced to sell out, and Orban arranged for his friends and supporters to buy them at bargain prices. Then he restored the lucrative advertising contracts. The net effect: Docile reporters who don't sniff out shady deals.

Like Orban, Erdogan has muzzled Turkey's free press and the Turkish judiciary, but his approach is less subtle. He has jailed hundreds of journalists, and some have died. He also conducted a massive purge of judges whom he considered insufficiently loyal.

Erdogan has faced a number of corruption scandals over the years. In 2013, there were massive protests against his government because of highly favorable government contracts that enriched real estate developers who happened to be key supporters. An investigation implicated four of his cabinet officials in suspicious transactions.

The pattern continues. In 2019, Ekrem Imamoglu, a member of the opposition party was elected mayor of Istanbul. This was all the more painful as Erdogan's party had controlled political power in the Turkish capital for many years. In fact, Erdogan got his start in politics as mayor of the city.

In December 2019, after a months-long review, the new mayor halted work on several large projects after uncovering many financial irregularities. Critics charge that Erdogan and his party used the projects to enrich his immediate family and political allies.

In short, Hungary and Turkey are the opposite of profiles in clean government.

It's true that Ukraine is ranked even lower in Transparency International's index, currently standing in 126th place. But it is the direction and the political will to fight corruption that matters. Volodymyr Zelensky run on a platform to fight corruption and was elected on that basis. He is a reformer.

If Trump were truly worried about Ukrainian corruption, you'd think that he would meet quickly with Zelensky, to back his efforts to clean up Ukraine's politics.

Furthermore, despite its many problems, Ukraine is a thriving democracy, with a free press. But that is not what has happened, of course.

How much Trump loves corruption in Hungary

Instead of hosting a meeting in the Oval Office with the young reformist Ukrainian president, Donald Trump was adamant about welcoming Viktor Orban on May 20, 2019 to his abode. Notably, this happened over his staff's strong objections.

It didn't help that, while Mr. Orban regularly expresses his admiration for Vladimir Putin and his regime, he piles scorn on Western European governments. Orban has also proudly declared that Hungary is charting a new path as an "illiberal democracy."

How much Trump loves corruption in Turkey

When Trump invited Erdogan to visit the White House on November 13, 2019, he once again ignored pleas from his staff and numerous senators not to host a meeting with Erdogan.

They were incensed by Turkey's invasion of Syria and attacks upon the Kurds. Of course, that invasion only become possible after the President ordered U.S. special forces to withdraw from northern Syria. Trump did so at Erdogan's request.

With that rash decision, Trump abandoned the United States' extremely valuable Kurdish allies who had played a key role in defeating ISIS. The President also sparked fears among the Israelis, Saudis and other Middle Eastern countries that the United States was no longer a reliable ally.

Donald Trump, the current President of the United States, is happy to meet with autocrats, even if they are rampantly corrupt and poke the United States in the eye. Meanwhile, Volodymyr Zelensky is still waiting for his invitation to the White House.

One thing is for sure: Donald Trump would have surely welcomed Zelensky's pre-predecessor, the highly corrupt, Putin-loving Mr. Yanukovich, to the White House a long time ago if he were still in office.