Everyone calm down! Iowa's caucus snafu is a minor bump, not a world-ending conspiracy

Iowa's technical cock-up is a good reason to end the outmoded caucus system, but not to sow conspiracy theories 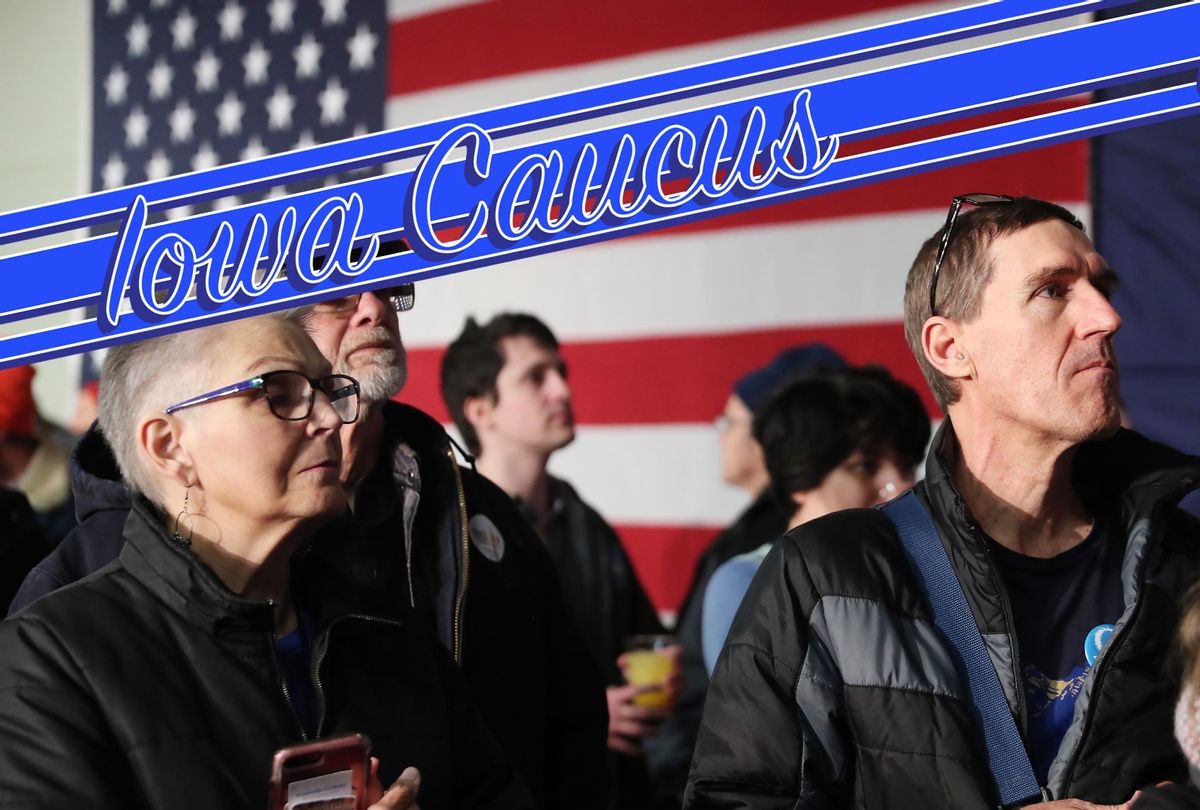 Supporters of democratic presidential candidate Sen. Bernie Sanders (I-VT) wait for results to come in at his caucus night watch party on February 03, 2020 in Des Moines, Iowa. Iowa is the first contest in the 2020 presidential nominating process with the candidates then moving on to New Hampshire. (Joe Raedle/Getty Images/Salon)
--

Going into the Iowa caucuses Monday night, the stakes felt sky-high compared even to other dramatic years, like 2016 or 2008. Even though, realistically speaking, the differences between how the Democratic candidates would govern as president are pretty small, the large field, combined with the urgent need to beat Donald Trump in November plus still-lingering anger over the way the 2016 primaries played out, had tensions running high.

Add to that the fact that large numbers of potential Iowa caucus-goers remained undecided in the days leading up to the event, creating what pundits like to call a "fluid" race. And of course there is the ongoing impeachment trial, which has sidelined three candidates who are U.S. senators — Bernie Sanders of Vermont, Elizabeth Warren of Massachusetts and Amy Klobuchar of Minnesota — by keeping them in D.C. instead of allowing them to campaign in the final days before the caucus.

All of that was no doubt why the reaction to a technical snafu that led to a lengthy delay in the results — they have still not been released, as of Tuesday morning — led to maximum panic. Cable-news talking heads got increasingly agitated over the course of the night, conflating their grasping need to fill air time with an actual need for the nation as a whole to find out immediately who will score the Hawkeye State's 41 pledged delegates — out of nearly 4,000. On-the-ground reporters, punchy from lack of sleep and a similar need to fill air time, reported from half-empty high school gyms in Iowa cities and towns as if they were covering a natural disaster.

But this is not actually a disaster. This is a minor setback in what will be a long race. If the splits between leading candidates reported from the floors of numerous precincts are any indication, Iowa's results may not be as definitive as people were hoping.

Of course, Donald Trump — who mistakes cable news for real life all the time — was caught up in the drama.

The Democrat Caucus is an unmitigated disaster. Nothing works, just like they ran the Country. Remember the 5 Billion Dollar Obamacare Website, that should have cost 2% of that. The only person that can claim a very big victory in Iowa last night is "Trump".

A good rule of thumb in life is to assume that whatever Trump says, the opposite is true. In this case, this is not a disaster, but rather a weird event that will be forgotten by Super Tuesday, if not by the New Hampshire primary next week.

Arguably, this minor snafu has a bright silver lining, as it may increase pressure to replace the outdated Iowa caucuses with a modern and much fairer primary election.

For months, there's been an increasing criticism of the choice to have the Iowa caucus kick off the Democratic nomination process. This was notably kicked off by former HUD Secretary Julián Castro, who dropped out of the presidential race months ago and began complaining about the fact that such a non-diverse and largely rural state has such an outsized influence. Iowa's caucus-goers were reportedly 91% white, but only 59% of Democratic voters nationwide are.

Even before the tech meltdown, watching cable news coverage of dazed reporters wander through rooms full of dozens of bored-looking white people having half-baked arguments, which at least were conducted with Midwestern politeness, made one feel that Castro is right. The Iowa caucuses suck up an ungodly amount of time and resources from candidates that could have otherwise be used to campaign against Donald Trump. The end result, unfortunately, is a lot of bad blood between campaigns who will likely have to get over their differences and forge a semblance of unity in the next few weeks or months.

The reasons why this happened appear to stem from reforms to the caucus reporting system, largely created to tamp down the kinds of wild conspiracy theories that spread in 2016, when Sanders supporters claimed he only lost the nomination to Hillary Clinton because the process had been "rigged."

As Iowa-based reporter Lyz Lenz wrote on Jan. 28 — which, for those keeping track at home, was several days before the caucuses — "There are new rules for the caucus that try to give it oversight and accountability without actually changing anything. And guess what? It's going to be a fucking mess."

CBS News reporter Ed O'Keefe addressed this head on, without much diplomacy, saying, "What is happening tonight is exactly what Bernie Sanders asked for."

He got an angry response online, but it appears, by all accounts, that this is true. In pressing for the caucuses to remain in place but for transparency-oriented reforms to be pressed upon a small state's party apparatus, the stage was set for a technical malfunction and the resulting major delays.

Ironically or otherwise, Sanders supporters online have been most aggressive in pushing conspiracy theories suggesting that this delay is evidence that their candidate is getting railroaded again. Indeed, the paranoid accusations started before it was even really clear that there was a delay, though it's unclear why the Democrats, if they were "fixing" this outcome, wouldn't have the fix in ahead of time so things went more smoothly.

This was made worse by former South Bend Mayor Pete Buttigieg, who seized on anecdotal evidence that he may have outperformed expectations to give a speech in which he declared himself "victorious." This has been taken as further evidence of "fixing," as Buttigieg is poised to pick up more moderate Democratic voters if former Vice President Joe Biden's campaign badly implodes. In reality, it's just more evidence that Buttigieg, who has been fighting above his weight class this entire race, thinks rather highly of himself.

Either way, it's no surprise that Donald Trump's camp immediately swung into action, eagerly encouraging Sanders supporters to run wild with conspiracy theories.

And by "Quality Control" they mean fixing the results to get the candidate the Democrat Overlords in DC want. https://t.co/EkIztYHYuN

This was all made worse by an earlier snafu that forced the final Des Moines Register poll, long considered the gold standard for this first state's presidential caucus, to be pulled before it was released. That was already causing unhinged conspiracy theories to spread across social media. Now that situation is likely to get worse.

The reality is that caucuses are a dumb way to kick off a nomination process, as many people pointed out on Twitter even before it was clear that the delays in reporting were significant:

Q: Hey Jeff, can you think of a more ridiculous, less democratic way to conduct an election than the Iowa caucus? A: Absolutely not. This is the worst. #IACaucus

The caucuses survive in part because all of this is very cute to watch, but it's truly staggering to think about the number of people who simply can't participate in a process this demanding for this long. It's abominable.

If you want to understand how preposterous it is that the Iowa caucuses determine who the next president is, tune in to CNN or MSNBC right now and get a load of this clusterfork

Besides increasing pressure to replace the outdated caucus system with a more civilized primary, the other silver lining in these delayed results is that it keeps the candidates honest. They have to keep on campaigning without pretending that an unrepresentative state that barely adds to the delegate count is a make-or-break moment. It's time for everyone to break their addiction to the Iowa caucuses.