Iowa clusterf**k: Who won? Who knows? But Democrats, and America, clearly lost

After an epic meltdown in Iowa, all Democrats except Biden declare victory. They're definitely wrong about that 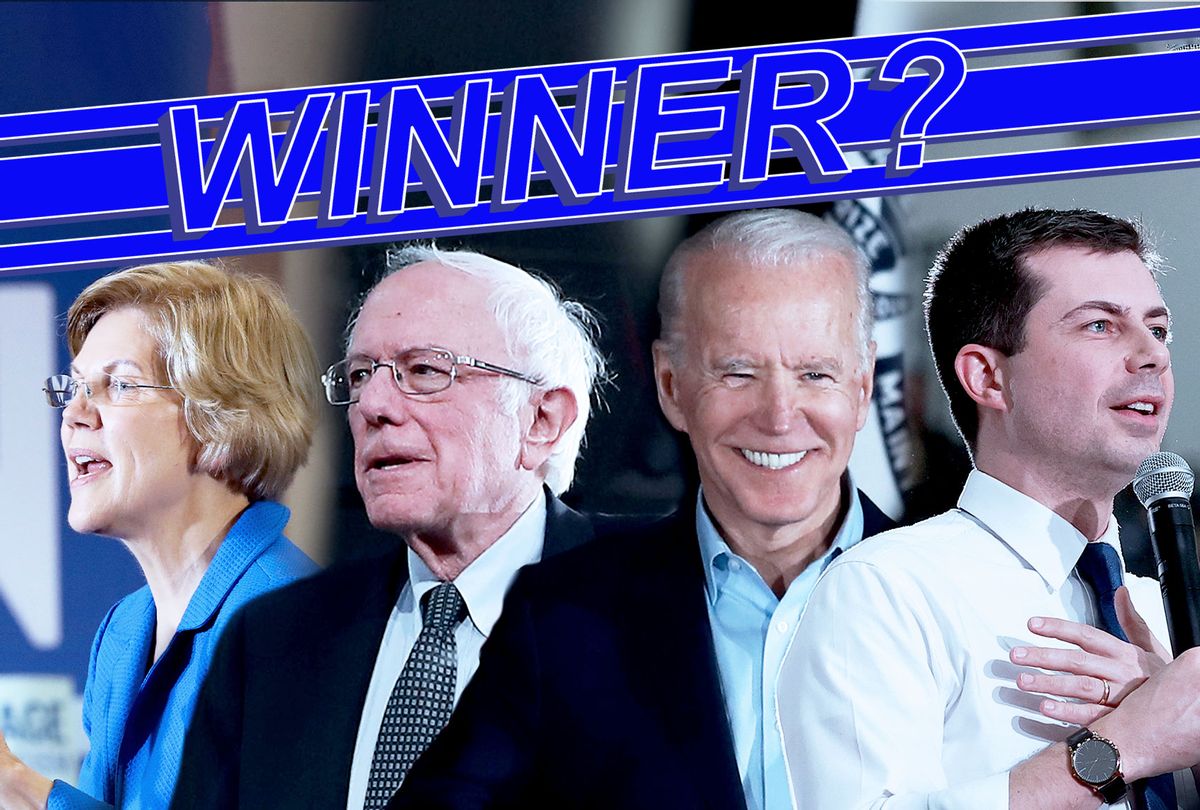 One Democratic presidential candidate has won the Iowa caucuses. But because of an epic project management failure, we likely won't know who that winner is until sometime late Tuesday — at best.

Not since the spectacular failed launch of Healthcare.gov, the Obama administration's online insurance exchange that nearly doomed the Affordable Care Act, has there been such a grand display of technological incompetence. Fyre Fest, after all, played no part in potentially electing the next president of the United States. "Dems in disarray," a sometimes ironic meme deployed by the left and right alike, serves as an apt description of the disastrous first vote of the 2020 presidential cycle.

Democratic National Committee chairman Tom Perez started the day by introducing a series of election reforms he said "empowered the grassroots and ensured our presidential nominating process reflects the will of the voters who will carry us to victory." By night's end, a hashtag was trending on Twitter calling for his resignation, amid numerous implausible but not disprovable conspiracy theories about how and why the Iowa caucuses went down the crapper.

There were a number of things that went wrong to lead to Monday's massive system meltdown.

Hours after the caucuses had ended, Democrats had failed to report more than 2% of results statewide. By comparison, 90% of precincts had reported by 11 p.m. Eastern time in 2016 (even though the tight race between Hillary Clinton and Bernie Sanders wasn't decided until the next morning). Around 2 a.m. Tuesday, the Iowa Democratic Party held a two-minute press call to say that no further results would be released until later in the day.

"We found inconsistencies in the reporting of three sets of results," Mandy McClure, a spokeswoman for the state Democratic Party, admitted late Monday.

To protect against cybersecurity breaches, the DNC and the Iowa Democratic Party introduced an app that was to be used to tabulate results. It was kept under wraps until a few weeks before Monday's rollout, however, leaving precinct captains little time to be trained. Meanwhile, the failsafe phone lines used to call in results the old-fashioned way were also recently changed.

"This is simply a reporting issue, the app did not go down and this is not a hack or an intrusion," McClure said in a call with the various candidates' campaigns, before explaining that some numbers "didn't add up," pointing to likely "user error."

In what looks to be a massive and completely avoidable PR disaster, the app — which only needed to work for a couple of thousand people for a few hours on one day — appears to have been created by a group of Silicon Valley technocrats with roots in the Obama and Hillary Clinton campaigns. That doesn't mean anything sinister was afoot, of course, but it adds terrible optics to epic incompetence.

"The underlying data and paper trail is sound and [it] will simply take time to further report the results," a party spokeswoman said early on Tuesday morning. But the untested app wasn't the only reason for these delayed results. The DNC's own reforms likely slowed the process.

In an effort to offer more transparency after 2016's contentious primary campaign, the DNC required more rounds of votes to be reported. The Iowa Democratic Party's use of the Orwellian term "quality control" to describe the review of the reported results only helped to fuel conspiracy theories online, one of the very things the DNC's reforms sought to stamp out. Even more ironic, at least one Democratic campaign was quick to peddle evidence-free claims that will no doubt serve to erode trust in the country's electoral process — even as Iowa Democrats reported surprisingly flat caucus turnout on Monday.

The circular firing squad quickly took aim — but contrary to what many Democrats might have assumed, it wasn't Bernie Sanders' campaign that fired the first shots. Instead, it was Joe Biden's, amid widespread anecdotal reporting that the former vice president did poorly in Monday's caucus voting.

"The integrity of the process is critical, and there were flaws in the reporting systems tonight that should raise serious concerns for voters," tweeted Biden deputy campaign manager Kate Bedingfield. According to the Washington Post, a lawyer for the Biden campaign sent a letter to Iowa Democratic officials citing "considerable flaws in tonight's Iowa Caucus reporting system."

Rep. Ilhan Omar, D-Minn., a prominent Sanders supporter, suggested in a series of tweets early on Tuesday that the now-discredited app was linked to the Pete Buttigieg campaign. Media reports so far have been unable to clarify this allegation.

Elizabeth Warren's campaign, meanwhile, seized on the moment of uncertainty to project its own results, forecasting a tight finish between her, Sanders and Buttigieg and claiming that Biden was well behind in fourth place, which would be a nearly catastrophic result for the former veep.

Both Buttigieg and Amy Klobuchar and appeared to declare victory, however conditionally. In a speech aired on cable news late Monday, Klobuchar told supporters, "We are punching above our weight." On Twitter, Buttigieg said, "By all indications, we are going on to New Hampshire victorious." Buttigieg, the last of the Democratic frontrunners to speak late Monday, told supporters.

Sanders, who had widely been expected to emerge as the winner on Monday, simply told supporters he believed he had done well, saying, "Now it is on to New Hampshire."

But Democrats are not free of their nightmare in Iowa, at least not yet.

As Democrats anticipate finally declaring a winner, Trump will gear up for perhaps his most "presidential" moment, the State of the Union address, followed by a certain Senate acquittal in his impeachment trial on Wednesday and an extensive round of social media gloating. His campaign has already seized on Democrats' chaotic night with abundant glee — and it's honestly difficult for Democrats to fight back.

"And these are the people who want to run our entire health care system?" Trump campaign manager Brad Parscale asked. Republicans took full advantage of the disastrous 2013 rollout of Obamacare, running brutal ads ahead of the red-wave 2014 midterm elections. Now the Trump campaign, which was poised to pounce on any result from Monday night — with more than 80 surrogates sent to the Hawkeye State in recent days — appears ready to run the same playbook.

Calling the caucuses "the sloppiest train wreck in history," Parscale rushed out a statement Monday suggesting  that "it would be natural for people to doubt the fairness of the process."

To be fair, Republicans screwed populist underdog Rick Santorum in Iowa back in 2012, delaying a final count that declared him the narrow caucus winner over Mitt Romney until the eve of the South Carolina primary, two weeks later. Perhaps Iowa's inability to figure out who the hell won will be a good thing, by ramping up scrutiny of its exaggerated importance on the primary calendar. Iowa is now the only state in the nation that still disenfranchises all people convicted of a felony for life, and in an era of increasing diversity its population remains about 90% white. Caucuses may once have had a charming town-meeting vibe, but in the 21st century can hardly be considered inclusive. The process is famously time-consuming and disadvantages shift workers, parents, the elderly and people with disabilities. It's pretty much the opposite of a secret ballot, and may encourage a certain amount of bullying and groupthink.

In Nevada, the next state to hold caucuses on Feb. 22, the state Democratic Party also plans to report its precinct-level results via app — reportedly an app highly similar to the one that failed in Iowa. Nothing like another election potentially plagued with accusations of rigging and ratf**king to buoy a party that's supposedly fighting for democracy.