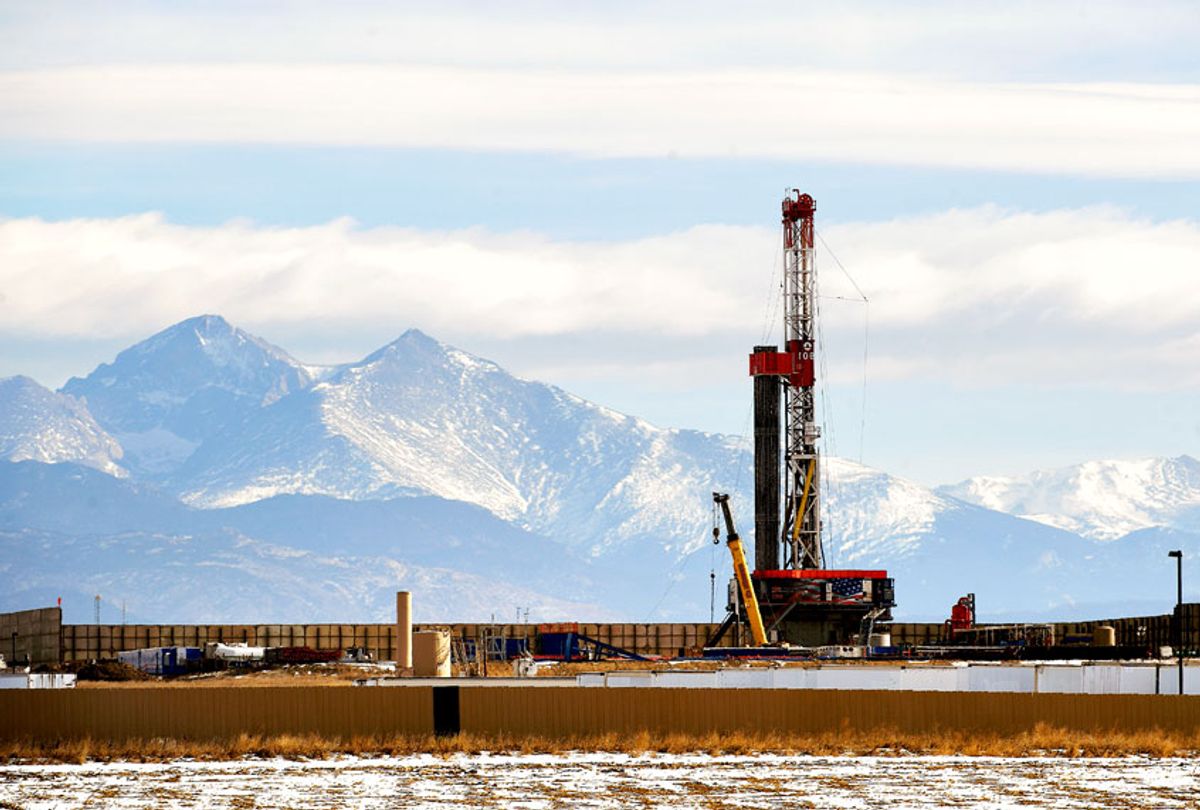 A large fracking operation becomes a new part of the horizon with Mount Meeker and Longs Peak looming in the background. (Helen H. Richardson/The Denver Post via Getty Images)
--

President Donald Trump's Tuesday evening State of the Union speech included plenty of boasts about the American economy, but the president's rhetoric reached a crescendo when monologuing about one industry in particular: oil and gas. "We are doing numbers that no one would have thought possible just three years ago," he said of the recent boom in U.S. fossil fuel production.

As the Washington Post's fact-checkers noted, Trump's claim is inaccurate, as the surge in oil and gas production began long before Trump's reign. Yet for the majority of the country, which is aware and frightened of the potential for surging carbon emissions to bring about a climate apocalypse, bragging about one's ability to extract 300 million year-old hydrocarbon deposits in preparation to convert them to carbon dioxide doesn't seem like something to brag about. Meanwhile, much of the rise in natural gas production is owed not to federal policy but to new engineering technology that allows for increased extraction — in the case of natural gas, hydraulic fracturing, or fracking, in particular.

Fracking is frequently in the news for stories about its risks for public health. Because the process involves pumping fluids deep into the Earth, groundwater contamination is a common aftereffect, as the water table and veins of hydrocarbons are often not too far apart underground. Likewise, fracking has been found to negatively affect air quality in communities that surround the natural gas wells. There has also been research to suggest that Pennsylvania residents who have been exposed to natural gas wells were twice as likely to have migraines, chronic nasal symptoms and fatigue.

Appalachian states like Pennsylvania are some of the most affected by natural gas extraction and, hence, fracking. As an arguable Rust Belt state, Pennsylvanians are oft-perceived by the media to have strong opinions about any industry that provides ample jobs, even if those jobs are for polluting industries; West Virginia and coal would be a comparable corollary. Hence, one might suspect, based on stereotypes, that Pennsylvanians would be ardently pro-frack.

But that would turn out to be untrue. A new poll shows that opinions on fracking — and whether to ban it outright, as some municipalities have — have split residents of Pennsylvania, which is the second biggest gas-producing state in the country.

According to a Franklin & Marshall College poll that was conducted between Jan. 20 and 26, Pennsylvania voters are just about evenly split on whether hydraulic fracturing should be banned. The polling data represents the responses of 628 Pennsylvania registered voters, including 292 Democrats, 251 Republicans, and 85 independents.

The climate crisis is a leading issue for all Democratic candidates, and an issue many voters care about in this election. The New York Times recently reported that being anti-fracking could "sink" some Democratic candidates in Pennsylvania. The state's lieutenant governor, John Fetterman, agreed.

"In Pennsylvania, you're talking hundreds of thousands of related jobs that would be — they would be unemployed overnight," Fetterman, who endorsed Bernie Sanders in 2016, said. He added that a ban on fracking would "absolutely devastate communities throughout the Rust Belt."

"If a candidate comes into this state and tries to sell that policy, they're going to have a hard time winning," he told the New York Times last week.

But in the swing state, the latest poll suggests that Fetterman may not be entirely correct — rather, there may have been a change in attitude toward fracking among Pennsylvanians.

In the Democratic field, Bernie Sanders and Elizabeth Warren have both said they support fracking bans. Yet climate scientists agree that rather than ban one technological method of extraction, the best overall case for a fracking ban would be as part of a systemic policy to cease using fossil fuels as much as possible, as fossil fuel combustion and extraction contributes greatly to rising carbon emissions globally. A paper by a Cornell University researcher recently estimated that in the past 10 years, more than half of the rise in methane emissions around the world came from fracking in the US.