Lt. Col. Alexander Vindman was also ousted from his position on the National Security Council on Friday 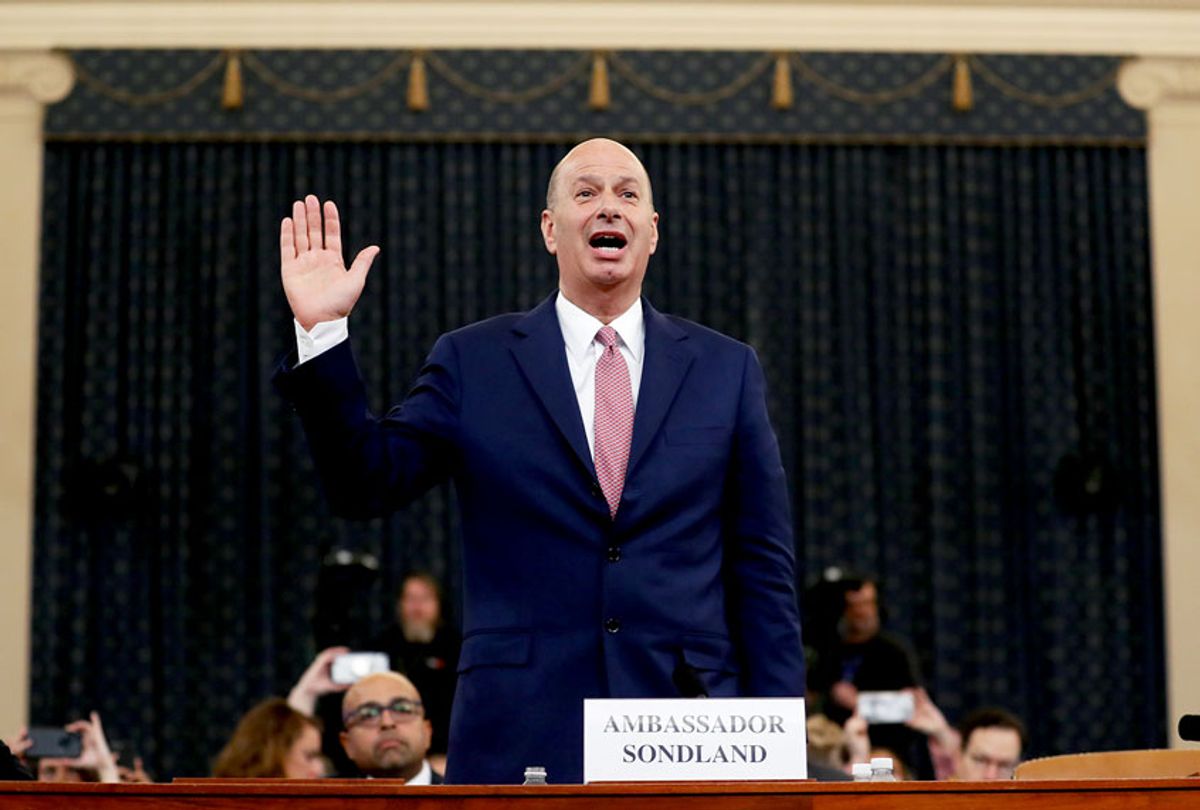 U.S. Ambassador to the European Union Gordon Sondland is sworn in to testify before the House Intelligence Committee on Capitol Hill in Washington, Wednesday, Nov. 20, 2019. (AP Photo/Andrew Harnik)
--

President Donald Trump fired U.S. Ambassador to the European Union Gordon Sondland on Friday evening, the New York Times reported, at least the third person to get purged in a post-impeachment streak of vengeance.

Sondland delivered some of the most damning testimony in the impeachment proceedings, confirming the House of Representatives that there was an explicit quid pro quo between the White House and Ukraine in exchange for an announcement of Trump's political opponents. Another central witness in the impeachment, Lt. Col. Alexander Vindman, was also ousted from his position on the National Security Council on Friday. Vindman's twin brother was also reportedly booted from the White House, though they are expected to retain positions in the Defense Department.

There was some mild irony in Sondland's firing, though. Trump frequently cited Sondland's account of a phone call they shared, in which the president allegedly said there was no "quid pro quo," as exonerating. Rep. Adam Schiff (D-CA), the lead impeachment manager, argued that this incident actually indicated Trump's consciousness of guilt. By firing Sondland, it seems Trump is confirming that his testimony was damning.

Sondland only became an ambassador after he donated $1 million to Trump's inaugural fund.

Many observers warned that Trump would feel emboldened and inclined toward vengeance once he was acquitted of the impeachment charges by the Senate. Those predictions now appear prescient.

"I was advised today that the president intends to recall me effective immediately as United States Ambassador to the European Union," Mr. Sondland said in a statement just hours after Colonel Vindman's dismissal. He expressed gratitude to Mr. Trump "for having given me the opportunity to serve."

The ouster of the Vindman brothers and Mr. Sondland may only presage a broader effort to even accounts with the president's perceived enemies. In the two days since his acquittal in the Senate, Mr. Trump has railed about those who stood against him like Speaker Nancy Pelosi and Senator Chuck Schumer of New York, the Democratic leader, calling them "evil," "corrupt" and "crooked," while his White House press secretary declared that those who hurt the president "should pay for" it.

"Just a clear, unmistakable message being sent by the president to everyone in the government," said former Justice Department spokesperson Matthew Miller of the firings.