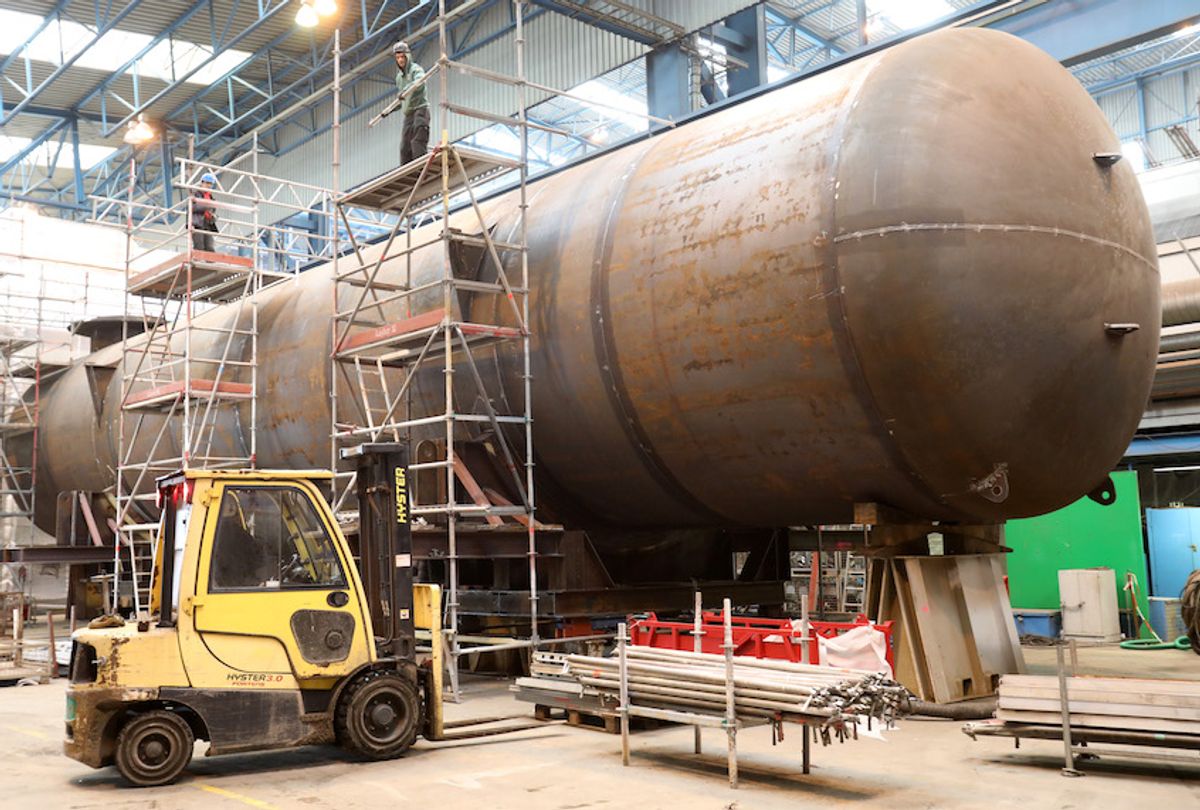 View of the gas tanks for the liquid natural gas (LNG) drive of the cruise ships of the Carnival Cruise Line at the Neptun dockyard in Rostock, Germany, 1 December 2017. (Bernd Wüstneck/picture alliance via Getty Images)
--

Carnival Cruise Line's latest ship is a behemoth. The Mardi Gras sports 20 decks, 5,200 rooms, and as if that wasn't enough, a swooping outdoor roller coaster. Unlike most of the company's fleet, it won't be running on oil. The vessel, which first hit the water in Finland late last month, will run entirely on liquefied natural gas when it starts sailing from Florida to the Caribbean Sea this fall.

Cruise and cargo shipping companies are increasingly switching to the super-chilled fuel, which produces much less air pollution compared with the dirty "bunker fuel" that previously powered most ships. By 2025, Carnival says it will have 11 vessels running on liquefied natural gas, or LNG, including the AIDANova, the world's first LNG-powered cruise ship.

But the overall benefits of switching to natural gas aren't entirely clear. A new study found that using the fuel may do little to curb the shipping industry's greenhouse gas emissions in coming decades. In certain cases, it might actually be worse for the climate than another conventional marine fuel, researchers said.

The report, by the International Council on Clean Transportation, or ICCT, adds to the debate about whether natural gas should play a role in the industry's shift to cleaner fuels.

Many environmental groups and academic experts argue that LNG is a costly distraction, one that siphons investment away from technologies that could cut a ship's emissions to zero, and it locks ships into relying on fossil fuels at a time when climate scientists say we should leave them in the ground. For proponents, the fuel is one of few readily available alternatives to bunker fuel — the longtime industry favorite that is mostly banned from oceangoing ships. Compared to that sludgy old staple, LNG produces much less air pollution and carbon dioxide.

The main problem with LNG is methane, a potent greenhouse gas that traps significantly more heat in the atmosphere than carbon dioxide. The ICCT team found that high amounts of unburned methane can leak from some LNG marine engines. Extracting gas, liquefying it, and transporting the fuel also results in methane leaks and CO2 emissions. Added up over a 20-year period, LNG emits far more lifecycle emissions — between 70 and 82 percent — than "marine gas oil," a common petroleum product, researchers said.

"That's the missing part of the equation that [the industry] is not accounting for right now," said Bryan Comer, a senior researcher in ICCT's marine program who co-authored the report. "If you account for how much methane is escaping from marine engines, you get a much different picture of what the total climate impacts could be of using LNG as a marine fuel."

The ICCT study, funded by environmental group Stand.earth, builds on earlier reports that question LNG's potential benefits. In 2018, researchers at the University College London's Energy Institute found that "there is no significant CO2-equivalent reduction achieved through the use of LNG as marine fuel," in large part because of the "upstream" emissions from producing natural gas.

"It's a dead end," said Tristan Smith, who researches low-carbon shipping technologies at the institute.

The global shipping industry moves trillions of dollars' worth of goods every year and accounts for about 3 percent of total annual greenhouse gas emissions. That number is projected to soar in coming decades if vessels don't use cleaner fuels. Cruise and cargo ships have historically contributed significant amounts of sulfur oxides and nitrogen oxides, which can damage people's hearts and lungs, especially in waterfront communities.

In response, regulators have started clamping down on maritime pollution. Since the start of the year, the International Maritime Organization, a United Nations body, requires vessels to burn only low-sulfur fuels. Newly built ships must follow energy-efficiency design standards, while the industry as a whole is working to cut emissions in half by 2050 compared with 2008 levels.

Today, most ships burn blends of low-sulfur petroleum products, including marine gas oil and "very-low-sulfur fuel oil," in their diesel engines. About 4,000 ships, or 4 percent of the global fleet, either have or will have scrubbers on their smokestacks, which allows them to keep burning high-sulfur bunker fuel.

Peter Keller, a former executive at TOTE Maritime, said the U.S.-based company decided in 2012 to switch to LNG to get ahead of any potential environmental rules. LNG produces little nitrogen oxide, virtually no sulfur dioxide and nearly zero"black carbon" — soot that absorbs the sun's heat and directly warms the atmosphere. LNG is also estimated to curb onboard CO2 emissions by about 20 percent.

"We said, 'OK, what gives us as much comfort as we can get in the future that we won't get regulated out of using a fuel?'" Keller recalled. TOTE Maritime now operates two LNG-fueled containerships between Florida and Puerto Rico and is converting other vessels in Alaska.

Carnival considers the super-chilled liquid to be "the cleanest fuel with no visible emissions widely available," the company told Grist. As the company builds new LNG ships, most of its existing fleet still uses bunker fuel with scrubbers at sea and marine gas oil near shore.

Proponents said they still consider LNG to be a way to help curb carbon emissions, despite the new ICCT research. Keller is chairman of SEA-LNG, an industry group that promotes LNG adoption. Last year, his group commissioned a report that said LNG could reduce lifecycle emissions by between 7 to 21 percent compared to heavy bunker fuel, depending on the engine.

That report, produced by the consulting firm Thinkstep, differs from the ICCT study in a key way. Thinkstep analyzed methane over a 100-year time frame, which is common for climate studies. Methane intensively warms the planet soon after it's emitted then decays into carbon dioxide. (CO2 is less potent but persists in the air for hundreds or thousands of years.) Over 100 years, methane traps 34 more heat in the atmosphere than CO2.

In its first 20 years, however, methane traps 86 times more heat. ICCT researchers emphasized this timeframe, under which LNG delivers no emissions-reduction benefits in any scenario. The team said this metric reflects the "urgent need" to slash emissions within decades to limit global warming.

Comer, the ICCT researcher, said that rather than spending billions of dollars on engines, storage tanks, and refueling infrastructure to switch to LNG, the shipping industry would be better off improving diesel ships and investing heavily in clean-energy technology. New and existing ships could run on marine gas oil and use energy-saving technologies — such as air lubrication for ship hulls and wind-powered rotor sails — to minimize fuel use.

"We recognise that fossil LNG is not the final solution for decarbonization," Carnival said by email. But the company considers it "an important stepping stone to our industry's ongoing objective to reduce its carbon footprint."