New federal data show that oil refineries across the U.S. are spewing benzene into nearby neighborhoods 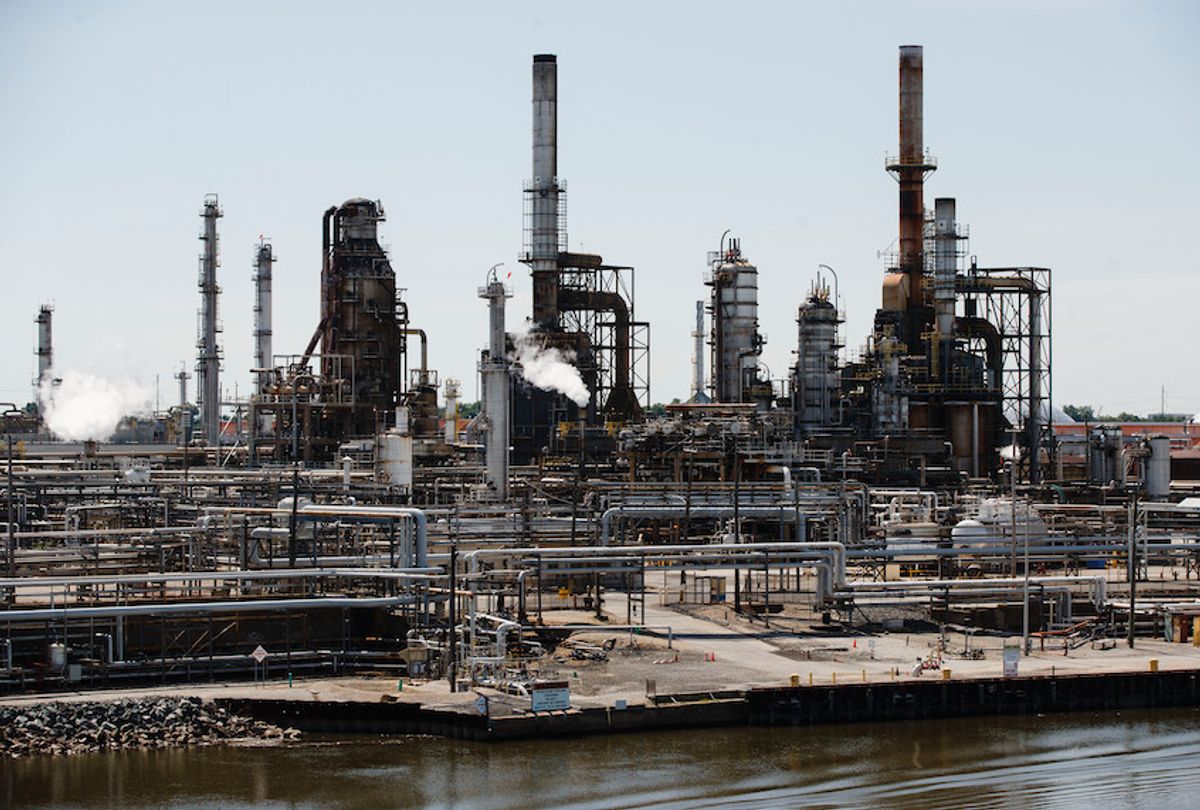 On a spring evening in 2018, the sky across the New Orleans metro area lit up with fiery light. Friends and neighbors turned to each other with raised eyebrows, anxiety and dark humor. Did a nuclear bomb go off? Is an asteroid about to fall into Lake Pontchartrain? Is this the end?

We would soon learn from the evening news that a massive fireball had erupted from the aging oil refinery in Chalmette, a community on the Mississippi River near New Orleans. When equipment in refineries accidentally come under too much pressure, safety valves release burning gases into the air. The more than 100 refineries across United States release hundreds of flares each year, and many more occur at chemical plants and oil and gas drilling sites, according to environmental groups.

Flares are a common sight in southern Louisiana and other parts of the country dominated by the fossil fuel industry, but the raging fireball released by Chalmette Refining was unusually large. Refinery officials and state regulators rushed to the media and assured the public that the pressure-release system had worked as it should, and no one was hurt. Still, the flare left an awful smell in the air, and nearby residents were unnerved and worried about breathing toxic pollution.

Indeed, refinery flares release a number of climate-warming gases along with toxic and cancer-causing pollutants that contribute to smog and pose health risks to surrounding communities. A 2016 study found that children living near a BP refinery in Texas City, Texas, experienced neurological problems, diarrhea, trouble breathing and other health impacts because they were exposed to benzene, a known carcinogen, after a flaring incident.

Across the country, oil refineries are spewing benzene into nearby neighborhoods and endangering the health of residents, according to new federal data compiled by the Environmental Integrity Project and released on Thursday. Chalmette Refining is listed among 10 refineries nationwide where monitors have detected levels of benzene considered by the Environmental Protection Agency to be enough of a danger to human health that operators are now required to fix the problem. Several refineries reported benzene concentrations known to contribute to an increased risk of cancer.

Flares are far from the only source of benzene and other harmful pollutants from oil refineries, according to Corey Williams, the research and policy director at Air Alliance Houston in southeast Texas.

"There are many, many, many sources of benzene in addition to flaring, which is considered a 'point source' emission because it's coming from a particular point," Williams said in an interview. "Then there are also fugitive emissions that could be a result of poor maintenance or old equipment, and that is an 'area source' — leaks, essentially, which can be numerous and everywhere."

Philadelphia Energy Solutions, the largest and oldest refinery on the East Coast, tops the list of refineries exposing the public to benzene. Like many polluters, the refinery is surrounded by lower-income neighborhoods and communities of color. The refinery shut down last June after erupting in explosions and fires, sending thick clouds of toxic black smoke into the air. Refinery operators filed for bankruptcy and want to sell off the property, but the Trump administration is currently lobbying to keep the refinery open.

Stunningly, none of these refineries violated federal law by endangering surrounding communities with benzene emissions, but new federal rules require refinery operators to identify the root cause of — and eventually fix — the problem. That will likely mean updating facilities and installing new equipment — something many older refineries and petrochemical facilities have failed to do, despite high levels of pollution and a long list of deadly accidents, chemical spills and explosions.

Monitors installed at nine additional refineries in Texas, Kansas, Illinois and beyond found that levels of benzene in the air exceeded a federal health standard for short-term exposure by inhalation at least once over a two-week period last year, increasing the risk of cardiovascular problems and developmental delays in children in nearby areas. However, under current federal rules, these nine refineries are not required to take action to reduce the pollution.

"These results highlight refineries that need to do a better job of installing pollution controls and implementing safer workplace practices to reduce the leakage of this cancer-causing pollutant into local communities," said Eric Schaeffer, executive director of the Environmental Integrity Project, in a statement. "EPA in 2015 imposed regulations to better monitor benzene and protect people living near refineries, often in working-class neighborhoods. Now, EPA needs to enforce these rules."

Whether the EPA will hold the polluters to account remains to be seen. Environmental enforcement has tumbled under President Trump, who bills himself as a close ally of the fossil fuel industry. The Trump administration has systematically rolled back environmental regulations, including chemical safety rules governing oil refineries and other petrochemical facilities that were delayed despite horrific accidents and ultimately weakened to favor the industry.

Williams said air pollution from oil refineries and petrochemical plants is particularly severe in the Gulf South, where large numbers of facilities are clustered in various industrial areas near the coast. Benzene leaking into nearby neighborhoods is only part of the problem; other pollutants contribute to smog and health problems across the region.

Of the 19 refineries listed in the Environmental Integrity Project's report on high benzene emissions, eight are located in eastern Texas and two are located in Louisiana. The oil, gas and petrochemical industry is a wealthy and powerful political force in this part of the country, and regulators are notoriously lax. With Trump in the White House, the fossil fuel industry currently enjoys similar influence over the federal regulators charged with protecting public health and the environment nationwide.