In this twist on the legal procedural, an imprisoned innocent man becomes a jailhouse lawyer 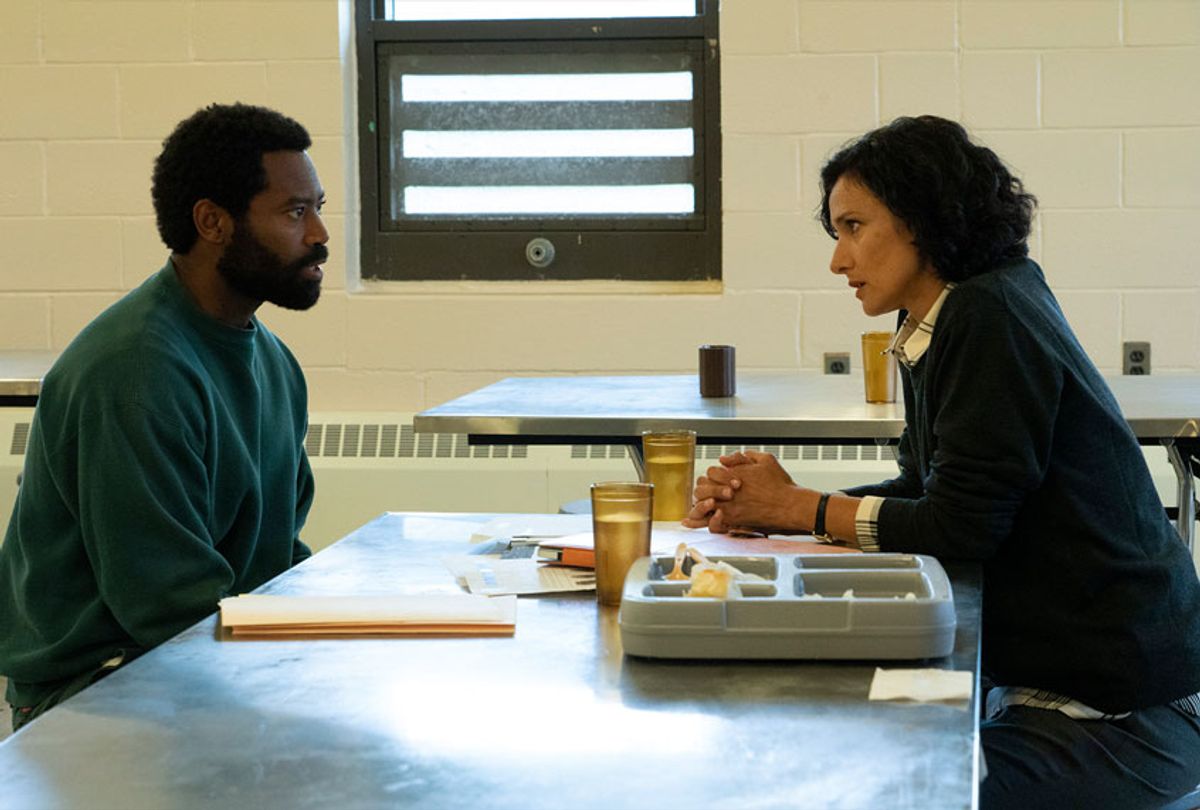 Nicholas Pinnock and Indira Varma in "For Life" (ABC/Giovanni Rufino)
--

You have to respect the means by which ABC's "For Life" takes the legal procedural, a genre that has countless miles on it, and overhauls its mechanics with an unusual, socially relevant case.

That it draws inspiration from the true story of Isaac Wright Jr. to do so, a man wrongfully convicted on drug trafficking charges and sentenced to life in prison in 1991, only adds to its sense of dramatic realism.

Wright was freed on bail 1996 after the crooked prosecutor responsible for his false imprisonment was convicted of dozens of felonies. Said prosecutor died by suicide to avoid doing time, and his successor initially demanded a retrial before later asking the judge to adjourn the second trial indefinitely.

You can't make up a story that twisty and triumphant – but "For Life," which comes to us in part from "Power" executive producer Curtis "50 Cent" Jackson, nevertheless adds embellishments to the establishing plot of its hero and Wright's stand-in, Aaron Wallace (Nicholas Pinnock).

While Wright attained his law degree after getting out of prison, Wallace becomes an actual jailhouse lawyer, earning his degree through correspondence courses and discovering loopholes that allowed him to attain a license to practice in New York.

His fantastic underdog story gains media attention when he argues his first case during the pilot, and in that episode, those following the judges and arbitrators hearing Wallace's arguments alternate between being impressed by his creative legal interpretations and irritated by his lack of experience.

Watching Wallace lose a case can be painful. When he wins, however, he isn't afforded the luxury of celebration. This being network television, Wallace also does questionable acts that tempt fate and, in one instance, judicial punishment, testing the assumption that the audience will root for him nevertheless. Winning by way of trickery is the way the American justice system works, right?

All of this makes "For Life" quite an interesting test case for a broadcast drama. Prison shows on TV are obviously nothing new, but a primetime drama set mostly in prison, starring a black man, and featuring a mostly black cast is an anomaly.

Remember, "Prison Break" invited its audience to root for two white guys. Even Netflix's "Orange Is the New Black" opened with the story of an upper middle class blonde woman convict to get us to watch and subsequently care about the poor women, mostly of color, who make most of that prison's population.

The protagonists of each of those shows actually committed the crimes for which they were sent up. Whereas Wallace's wrongful conviction serves as the foundation of "For Life," and this adds an aggravated edge to the story that makes the character's setbacks, especially an early one of his creation, feel more deflating than a typical lawyer's courtroom defeat.

For while a standard TV attorney can simply repair to his or her finely appointed office and lament over a nice scotch, Wallace returns to a small cell jammed with legal files and his personal conspiracy wall.

Taking in all of this leaves me torn about "For Life" even as I appreciate the thoughtfulness of its story and creator Hank Steinberg's means of interweaving the larger politics surrounding racial inequity in the justice system into this very specific penal ecosystem.

Indira Varma, who is engaging in just about every series where she appears, provides a lean and plausible portrayal as the prison's warden Safiya Masry, Wallace's champion who also finds herself in the unenviable position of being married to a lawyer (Mary Stuart Masterson) aspiring to run against the district attorney (Boris McGiver) who put Wallace away in the first place.

The story leaves no doubt that everything Wallace does is to return to his family, even though his estranged wife Marie (Joy Bryant) appears to have moved on and repeatedly tells their daughter Jasmine (Tyla Harris) not to get her hopes up too much that he'll win his release. That's an honest assessment, but a depressing one as well.

But I also wonder why the circumstances of the main character's false arrest are rendered in a blurry expository montage that fails to clearly establish how he was jettisoned out of his old life and into prison. It's possible that the writers plan to go into more detail about Wallace's case in a later episode, but given the central importance of his innocence and wrongful conviction, one would think that the story would make what happened in the key moment in which everything changed visibly unequivocal.

There are also moments in which McGiver's villainy has a rote feel about it, although Erik Jensen's assistant district attorney Dez O'Reilly is easier to detest. He's playing the part of a public servant going through the motions of his job and more invested in keeping Wallace and other inmates in their place instead of ensuring that justice is served. Set against the show's multidimensional protagonists, these adversaries come across as predictable.

And while those actors have the luxury of playing with a broad emotional palette, "For Life" limits Pinnock's range of expression to determination, frustration, anger, sorrow, and despair – all of which is understandable. Hope flits across his face a time or two, but otherwise he's trapped in his fury, bringing the audience right in the cell with him. And this also makes "For Life" an imposing emotional experience to process hour by hour, one that – regardless of how brilliantly its ensemble performs – may be tough to overcome.

However, the narrative's toughness also works to the show's credit. Unlike another well-meaning midseason dramas, "For Life" does not try to jam a bushel of teachable moments about social injustice into every hour.

Its laser focus on Wallace's story, his burning need to take every injustice personally, and the cold lessons he's made to learn in doing so, ask us to invest in his uphill battle and cheer him on as he fights for the causes of fellow inmates the rest of the world prefers to write off entirely. The politics driving the criminal justice system might not be on his side, but as he pulls together his case, the law might be – and that may be the type of catharsis required to win over that most fickle of juries otherwise known as the primetime television audience.