Bernie takes New Hampshire as Buttigieg, Klobuchar fight to be his main opponent

Sanders emerges as frontrunner, but dropoff from 2016 suggests his campaign falls far short of a "revolution" 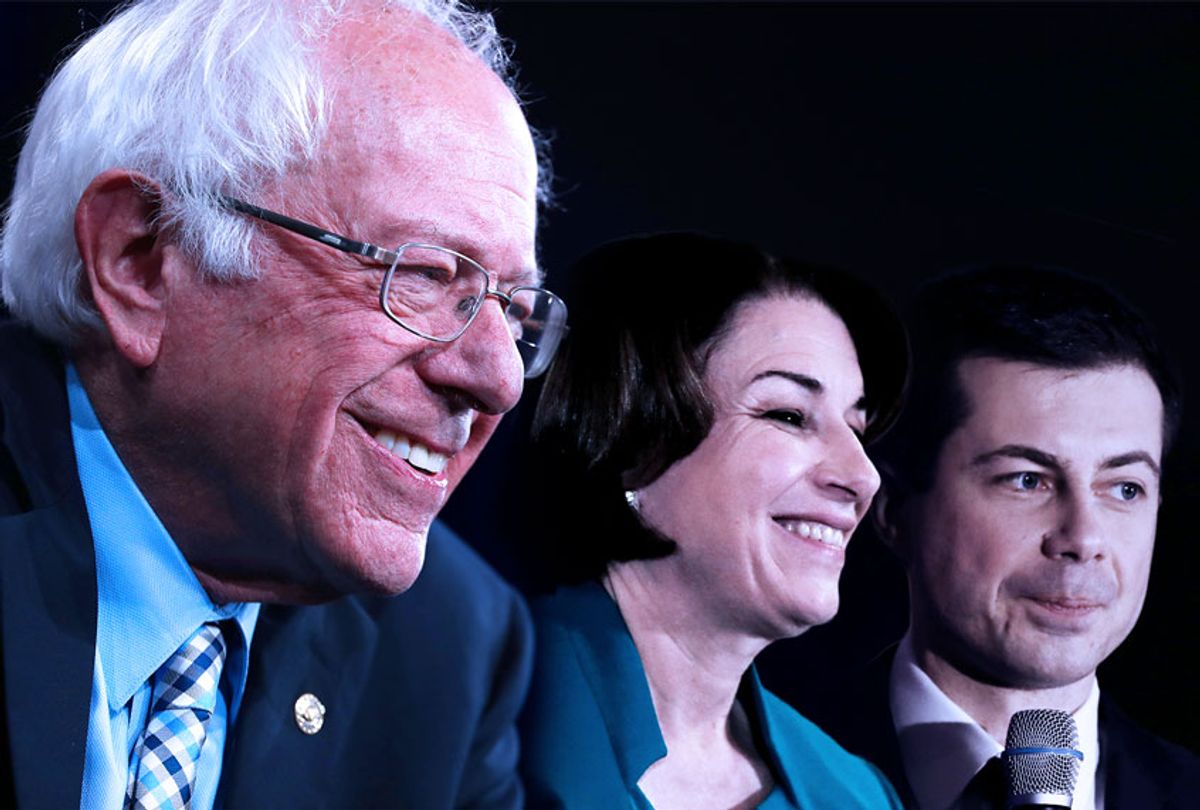 After the not-actually-an-emergency delay in getting the results of the Iowa caucuses last week, Tuesday night's smooth New Hampshire primary was a relief, if only because cable-news talking heads weren't caught in a nightmarish loop, trying to fill the wait time with inane chatter. But the results of the night didn't offer terribly good news for anyone running for the Democratic nomination — even for the winner, Sen. Bernie Sanders of Vermont, who got more votes than any other candidate for the second week running, but received only 26% of the vote (at time of filing) in a crowded and tightly packed field.

Instead, the New Hampshire primary appears to offer another split, this time a three-way split between Sanders, former South Bend, Indiana, mayor Pete Buttigieg, and Sen. Amy Klobuchar of Minnesota, who surged in the polls in the final days before the primary. Buttigieg was close on the heels of Sanders with around 24% of the vote, while Klobuchar finished a strong third at 20%. Former Vice President Joe Biden, once the polling leader both here and nationwide, fell short of the delegate threshold. Sen. Elizabeth Warren of Massachusetts, who surged last summer before gendered questions about "electability" took her down, also fell short of that minimum.

Those numbers are startling, because Sanders won the New Hampshire primary decisively in 2016, with over 60% of the vote (against only one significant opponent). It appears that more than half of those voters opted this time for Klobuchar, Buttigieg or one of the many other candidates in the race. Worse, Warren's collapsing numbers suggest that many of her supporters, who have long cited Sanders as a second choice, have already switched camps, which might have pushed Sanders over the top but left him well short of an actual majority.

Klobuchar's third place showing surprised a lot of pundits — even me — but in retrospect, it makes a great deal of sense. She ran a solid campaign in the state, hitting the diners and kissing the babies, but mostly exuding a sense of solid competence that must feel soothing in the era of Trump. Everything that Biden promised to be on the campaign trail, Klobuchar actually offers. For people who were drawn to the former veep's supposed solidity and stability, Klobuchar really is the better alternative. If she hadn't split the vote with Buttigieg, she might well have taken home a solid win against Sanders.

From the beginning of this race, it's been clear that the big advantage Sanders has is his robust, loyal base that couldn't be moved, even when Warren offering a version of the Sanders pitch in a friendlier tone, with more of an eye toward party unity.

The question, then, is whether Sanders has a ceiling — some point past which he can't expand. It appears he might, and more worryingly, that the ceiling may be but a few inches above the floor. Sanders has argued since 2015 that his campaign is a "political revolution," and that his pitch for democratic socialism could remake American politics and drive enthusiasm that Democratic politics-as-usual cannot muster.

The reality, however, is that Sanders didn't build on his 2016 showing, but saw his support cut more than in half, suggesting that what was motivating half of the New Hampshire voters he got in 2016 wasn't so much political revolution as the novelty factor and opposition to Hillary Clinton. If either Buttigieg and Klobuchar had dropped out, and weren't splitting the non-Sanders vote this time out, either candidate quite likely would have won New Hampshire by a healthy margin.

As it looks right now, Sanders may be able to pull out the nomination while falling short of a majority of Democratic voters. As long as he can keep holding the lead, even if only by winning a quarter to a third of the vote in any given state, he can let his opponents keep taking each other out until he's the only man left standing. It's not exactly a political revolution, but it could be a winning strategy.

Still, there's a very real concern that the Sanders ceiling is real, and that various factors — bitter feelings from his 2016 race against Hillary Clinton, anxiety about nominating a "socialist," suspicions that Sanders, who is not a registered Democrat, isn't loyal to the party — will leave a lot of Democratic voters less than excited about a Sanders nomination. In truth, he faces a lot more obstacles than a typical Democrat would in getting people who didn't vote for him in the primary to back him with enthusiasm in the general election.

As much as it might grind the teeth of the extremely online, the truth is this: Sanders needs to start pivoting to the general election, pretty much now. That doesn't mean he has to back down on his policy positions, but it does mean he might want to take a more conciliatory, inclusive approach in his rhetoric. Because this could still be a drawn-out primary, and every day it drags out with internecine feuding, the more chance there is for hurt feelings that will make unifying the Democratic coalition in November that much harder.

After this split verdict, however, it's more important than ever to remember that Iowa and New Hampshire are small, rural and largely white states that are not demographically representative of the Democratic Party. For most of the candidates — including Biden, who trailed far behind in both states — it's worth it to stick it out, if their funding will hold up, through Super Tuesday. There's a not-small chance that once a more diverse, more urban population gets to vote, the entire race will be upended again.

There's also a chance that Sanders can improve on these barely-wins once the primary opens up to bigger states. Morning Consult polling shows that Biden and Warren supporters mostly view Sanders as their second choice, so some key dropouts might help boost him further.

In fact, the secret weapon Sanders probably has is Elizabeth Warren. That she will offer a robust endorsement if she ultimately drops out is beyond doubt. The only question is when that might happen, and what kinds of concessions Warren will get out of Sanders in exchange. The smart move from Sanders would clearly be to make Warren his running mate — she's well-liked and competent, and her presence on the campaign trail would help ameliorate many Democratic voters' concerns that Sanders is more interested in idealistic rhetoric than in getting things done.

After New Hampshire's three-way split, one thing is certain: This is not over. While the upcoming states may change things quite a bit, both Klobuchar and Buttigieg can see that Sanders isn't even cracking 30% and will hope to coalesce the rest of the voters behind them. That, however, raises the incentive for the two of them to keep fighting each other for the non-Sanders vote, and could clear the path for Sanders to win the nomination without ever winning a majority.