Devin Nunes has a new hustle: Leading Republicans in a post-impeachment "strike" 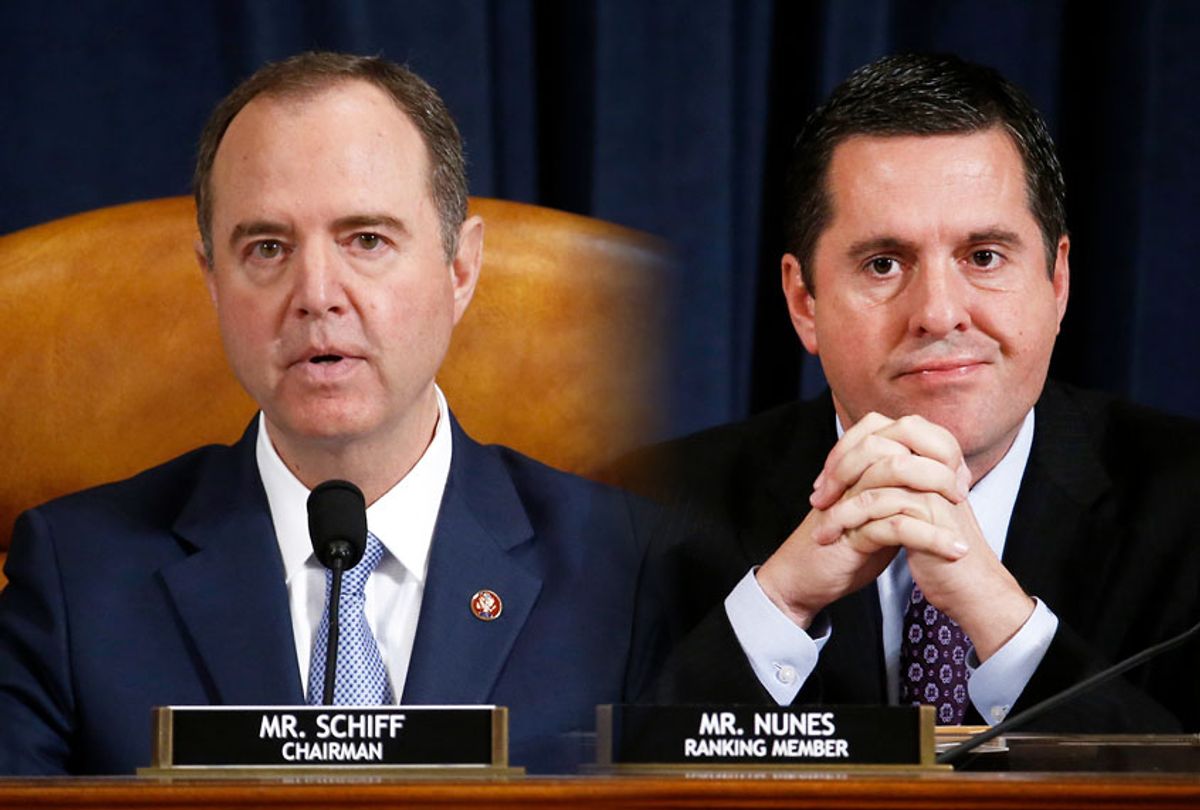 Representative Adam Schiff, a Democrat from California and chairman of the House Intelligence Committee, left, speaks as Representative Devin Nunes, a Republican from California and ranking member of the House Intelligence Committee, listens during an impeachment inquiry hearingon Capitol Hill November 21, 2019 in Washington, DC. The committee heard testimony during the fifth day of open hearings in the impeachment inquiry against U.S. President Donald Trump, whom House Democrats say held back U.S. military aid for Ukraine while demanding it investigate his political rivals. (Andrew Harrer-Pool/Getty Images)
--

Less than a week after President Trump lauded Rep. Devin Nunes, R-Calif., as "the hardest worker," the ranking member on the House Intelligence Committee refused to show up for his first day back at work following the president's impeachment trial.

All nine Republican members of the House Intelligence Committee were absent for a Wednesday morning hearing on the development of artificial intelligence for the purposes of national security. The work strike came as the committee held its first public hearing since Trump's impeachment inquiry.

"Until the Committee prioritizes oversight activities related to urgent and critical concerns, Republican Members cannot support distractions from our core responsibilities," the Republican minority threatened in a letter. Apparently convinced that "emerging technology and national security" are "distractions" rather than "urgent and critical concerns," Republicans are demanding that the Intelligence Committee — a prestigious Capitol Hill assignment, and a group whose members receive special security clearance — prioritize "Deep State" conspiracy theories ahead of the 2020 election.

Citing concerns about FBI abuses of the Foreign Intelligence Surveillance Act (FISA), Republicans complained that committee chair Adam Schiff, D-Calif., had not prioritized a review into the origins of the Russia investigation. Republicans were not known for fussing over FISA warrants in the aftermath of 9/11, but now point to the Justice Department inspector general's report that found the bureau's warrant applications against former Trump campaign adviser Carter Page  contained "significant errors and omissions."

"The IG's investigation did identify issues and errors in the FISA process, including potential misconduct," Schiff acknowledged when the report was released in December. Of course, the origins of the Russia investigation are also being reviewed by Attorney General William Barr's hand-picked prosecutor, John Durham. Still, Nunes has kept busy trying to discredit the investigation into Trump's 2016 campaign, appearing on Fox Business Network with Lou Dobbs on Tuesday to decry Robert Mueller's investigation as an "obstruction of justice trap." Now, to protest Schiff's supposed failed oversight of the last presidential election, Republicans plan to ignore their duty to hold hearings into potential malfeasance in upcoming elections.

Coincidentally, Nunes' ramped-up antics come after the Intelligence Committee's final report on Trump's withholding of U.S. aid to Ukraine in an effort to force a formal investigation into a would-be political rival. That report included phone records that indicated Nunes, as a member of Trump's transition team after the 2016 election, had been in touch with Lev Parnas, the indicted Florida businessman who assisted Rudy Giuliani in his dirt-digging efforts in Ukraine. Schiff, the lead impeachment manager during Trump's Senate trial, has said his panel would continue the Ukraine probe in the aftermath of impeachment. Nunes' stunt appears to be an effort to get ahead of such an inquiry.

"We hope this Committee can move past political investigations and publicity stunts and get back to the important work we traditionally have undertaken on a bipartisan basis," Nunes and his Republican colleagues concluded in their letter, publicly announcing plans to "boycott" their own positions of oversight. It was "concerning," GOP members wrote, that Schiff prioritized "publicity events rather than the more productive work that occurs in the Committee's classified spaces."

So for all of their previous complaints about "secret hearings," Republicans now claim to want secret hearings. Complaining about impeachment depositions conducted in "rooms in the basement" and insisting that the Sensitive Compartmented Information Facility (SCIF) was "secretive and lacks transparency," Republicans infamously rushed into a SCIF meeting during the impeachment inquiry with their cellphones and boxes of pizza. Suddenly they are super offended by "publicity events."

All this manufactured outrage about the so-called Deep State, rather than appropriate oversight of a surveillance state that has run rampant under both parties, is entirely in keeping with Republicans' recent history. Under Nunes' leadership, GOP members of the Intel Committee have worked tirelessly to undermine any sense of bipartisanship, largely obstruct and discredit the probe into the Trump campaign's apparent ties to foreign governments.