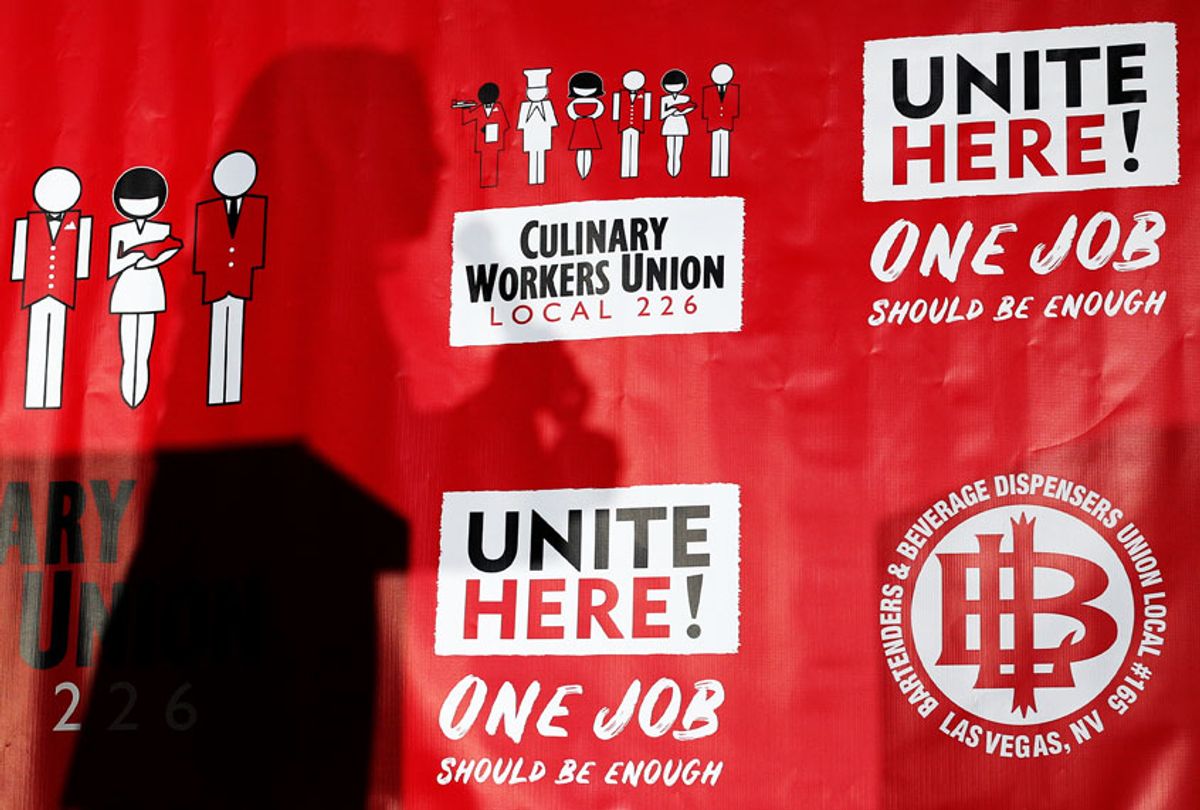 Nevada's influential Culinary Workers Union announced on Thursday that their union will not endorse a candidate in the 2020 Democratic presidential primary. Instead, the union will "endorse" three of their goals — which include ensuring one job is sufficient to provide for union members, the protection of their in-house healthcare, and immigration reform.

"We will not endorse any political candidate, but we will work hard to defeat President Trump," Geoconda Argüello-Kline, the union's secretary-treasurer, said at a press conference in Las Vegas. Argüello-Kline added that the union respects "every single candidate right now," but their endorsement is of candidates who their three goals.

The announcement came after the union — which represents 60,000 Nevada workers in the hospitality industry, such as guest room attendants, cocktail and food servers, cooks, bartenders, laundry and kitchen workers — made headlines for printing a flyer that stated that, if elected, Sen. Bernie Sanders (I-Vt.) would "end Culinary Healthcare," "require 'Medicare For All,'" and "lower drug prices."

The flyer, which described the position of six of the top Democratic candidates in a scorecard format, explained that Massachusetts Sen. Elizabeth Warren's "'Medicare for All,'" plan would also "replace Culinary Healthcare after 3-year transition or at end of collective bargaining agreements." Under the "healthcare" column, the flyer said that Democratic candidates Joe Biden, Amy Klobuchar and Tom Steyer would "protect culinary healthcare."

The news about the flyer, which was first reported by the Nevada Independent, resulted in pushback from Sanders and Warren surrogates and supporters. In a statement on Wednesday, Argüello-Kline described the response as vicious and "disappointing."

"Workers should have the right to choose to keep the healthcare Culinary Union members have built, sacrificed for, and went on strike for 6 years, 4 months, and 10 days to protect," Argüello-Kline said on Wednesday.

Specific details about pushback are scant, but on the union's Facebook page there are multiple comments challenging the union's stance on wanting to protect their health insurance. Some commenters have alleged that some of the comments are from fake Sanders supporters.

During the Thursday conference, Argüello-Kline declined to comment on the pushback, stating that the union's focus should remain on its goals.

While the union's stance is being publicly debated in the media, the uncertainty among union members is nothing new. The health care issue has been raised at every presidential town hall at the union's headquarters. Culinary Union member Chad Neanover explained to AP News in August 2019: "I don't want to give up my health insurance. I've personally been involved in the fight to keep it; A lot of people have fought to have what we have today."

More recently, Neanover told NBC News affiliate KSNV that healthcare is still a prioritized issue for him. "The healthcare issue is definitely my number one issue, because with the Culinary healthcare fund, it saved my wife's life at least two times," Neanover said.

Critics of the union's position who support of Medicare for All suggest that this line of thought — that union members' healthcare will be taken away from them — does not make sense. Some see it as be a blow for solidarity among different interest groups on the left.

"Unions do have a first obligation to their members — that's the nature of collective bargaining," Gabriel Winant wrote in Jacobin. "But these calculations have to be balanced against consciousness of the historical moment and the demands of broader solidarity, which is not just a moral question but a political and strategic one. On these counts, the Culinary is making a serious error."

Winant added that the move could politically isolate the union, and make the organization more "vulnerable to employer assault."

Matt Bruenig, founder of the left-wing think tank People's Policy Project, makes the case in a blog post that the union's health insurance is not that great, despite what the union tells journalists. "It is important in all of this that we not lose sight of the fact that Medicare for All, as proposed, would provide Culinary Union members with objectively better insurance while also raising their take-home pay," Bruenig wrote.

Sanders has previously argued that Medicare for All would benefit union workers, in part because having health insurance would no longer be dependent on having a job. In particular, union members on strike would benefit from this arrangement. Likewise, Sanders has also argued that unions would have more room to negotiate higher wages and other benefits when healthcare is off the table. Amid previous concerns, Sanders said he would work with unions on the issue.

The Culinary Union is a powerful force in Nevada, representing a diverse working class in a swing state. The Feb. 22 Nevada caucus will reveal candidates' appeal to this population.

Notably, the Culinary Union's stance on Medicare for All is not representative of all unions across the country. The Service Employees International Union (SEIU) is supportive of Medicare for All, along with National Nurses United. Sara Nelson, international president of the Association of Flight Attendants, has also publicly supported Medicare for All.

As Argüello-Kline said at Thursday's press conference, the Culinary Union is not against Medicare for All, they just don't want their own health insurance to be taken away. "We believe in choices," she said.