"Love, Linda": Reading my late mother's love letters to a man who is not my father

Reading them felt like betraying my father. I was too hungry for her words to let a chance at reading them again go 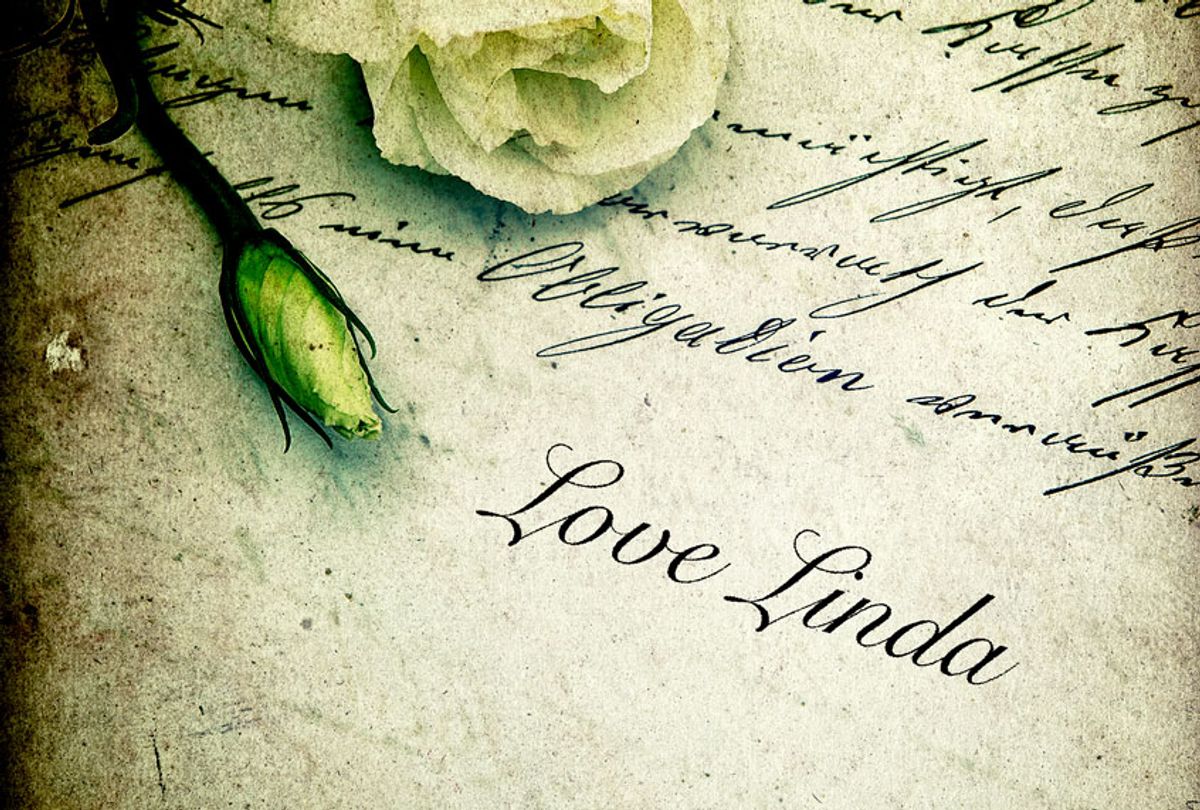 I had wanted to hear from her for so long that I didn't trust myself to open the envelope. I was getting married in a month, and I had so many questions for Mom about the guest list and the menu and what she thought about the non-Christian-non-Hindu-but-spiritual ceremony I was planning (intermarriage being something she'd shocked the family with when she married my father).

But even if I found the courage to stare down her familiar handwriting and write back, Mom would never respond. She died a decade ago, when I was 23. Which was why it was all the more extraordinary when a month before my wedding, a box of her love letters arrived on my lap.

My mother met my father on a blind date in Boston in 1978. Dad was living in Massachusetts and Mom in New York, so they wrote letters to keep each other warm during the Blizzard of '78. I grew up hearing about the words that convinced Dad that she was "The One" but had never seen them, so when my mother died, I hurricaned through our house in search of them…and found nothing.

The love letters now in my possession are not addressed to my father, though. They are addressed to her college ex, written when she was 19 and 20 and 21, just shy of the age I was when I lost her.

Reading someone else's love letters feels illicit. Reading your mother's love letters to a man who is not your father, downright traitorous. But a dead letter is undeliverable. Unreturnable. There was nothing else to do but keep reading.

I knew about Mom's college boyfriend because he had emailed her right after she got sick. Mom had shared his message with me when she was feeling low, her breast cancer diagnosis new and heavy on her chest:

A long, long time ago there lived a smart, funny, nice and beautiful Fairy Princess who met a Curmudgeon and decided to spend some time with him. The Curmudgeon had a Dad who was not only a curmudgeon but also very obsessive and compulsive, keeping track of every meal he would eat in a notebook as well as tracking how many shaves he would get from each razor blade he purchased.

Unbeknownst to the Curmudgeon, the Fairy Princess sent a series of letters to his Dad, which he dutifully kept in a neat pile next to his bedside table.

Many years later, the Curmudgeon's Dad passed away and as the Curmudgeon went through his Dad's personal effects he saw the stack of very well-thumbed letters still in a neat pile next to his Dad's bedside table. It was obvious that the Princess's letters had given the Curmudgeon's Dad a great deal of happiness over many years… The moral of the story is that sometimes even a princess may not know the lasting impact of her good deeds.

When Mom's ex appeared at her funeral, he looked at me like he'd seen a ghost. I ran into him again at a wedding, when he told me across a green lawn that smelled like summers with Mom that I had my mother's legs. I never wanted to see him again. Until he told me he had an entire box of love letters from her that he wanted to give back. He responded immediately to my email: "Call me."

This man Mom once loved picked up on the first ring: "I was hoping you'd call. I almost threw these out but couldn't bring myself to do it."

He had a daughter, it turned out, who lived nearby in the West Village. He was visiting her this weekend. Could I...?

I could not. I would be in Boston for my bridal shower. I was getting married, I explained, I wouldn't have time. I was sweating so badly I had trouble holding the phone to my ear. Here I was, betraying my father and my mother, too. But I was too hungry for her words to let this chance at holding her handwriting again go.

We decided he'd leave the letters with his daughter for me to pick up. This felt like a safe, sensible solution. He lingered on the line before uttering two more words that changed everything.

I let his apology hang in the air, uneasy about what he'd say next.

"I'm sorry that I wasn't there for her when we were together. I didn't know how to handle her grief."

Mom was a freshman in college when her big brother's plane was shot down over the mountains bordering Vietnam. She had rushed home to be with her parents, writing her boyfriend:

I found myself trying to comfort this stranger who had let Mom down: "You were both so young. It's hard to love someone when they're grieving."

Dad called me three times on Halloween night my senior year of college. I had ignored the first two calls, too busy working on my costume. When I finally answered, he told me that Mom had stage IV cancer. I didn't leave bed for two days. I called home every night that year and the next, when I was living in New York at Mom's insistence: Go, go, I'll be waiting for you when you get back.

Mom died a month after my own college boyfriend and I moved in together, before our pots and pans were even unwrapped. He was the one who entered the hospice room minutes after she died, who held me when I sobbed into his neck as Mom's grew cold, who spent his birthday at her wake. But as time moved on and I didn't, the distance between us grew.

Many nights, I went to bed alone in our Astoria apartment, waiting for him to join me. I'd fall asleep to the sound of the video games he played in the living room, gunshots followed by bodies falling. I'd tell myself, if he comes to bed I'll stay.

He'd later tell me he didn't know how to touch such a sad, grieving girl.

I was unhappy, but too terrified to leave. Moving on from him meant moving on from Mom. Nobody else will have met her, I told myself, no one else will ever know me as hers.

The letters before me were undeniably Mom's. I grew up watching her write thank-you notes for thank-you notes and drafts of birthday cards; if she wanted you to love her, she'd write her way straight into you. In her letters to her ex, she was funny and self-deprecating and practically begging to be loved:

My mother has just given me some friendly feminine advice. She says I shouldn't fall all over you (i.e., play hard to get) or else you'll forget about me. Well I'll ask you now—should I let you know how I feel or should I keep it a secret that I love you?

Her return addresses would make a postman blush:

She enclosed tiny gifts in exchange for his words: A white pebble from the beach. A handmade Valentine. She wrote an entire letter on toilet paper and covered it in playful puns. Every expression of need was couched in a joke, a just kidding, an apology for emotions threatening to overtake her.

Sitting down with these letters days before my own marriage was a revelation. Mom left her ex-boyfriend because she trusted that there was someone else out there who would love her saddest self alongside her most dazzling…and I did, too. Love requires more than fairy tales and Mom wasn't a princess. Removing that weight freed me to walk down the aisle toward my own great love.

I met my now-husband at work. My back went out before our first date so he brought me pillows, his brand of devotion so different from the struck-match partners of my twenties who always flamed out too soon. When he got up the courage to ask my Dad for my hand in marriage, my Italian-American father hugged him, welcomed him to the family, and cautioned him: "Losing her mother was hard on her. Can you promise me you'll be there for her, son?"

Dad was only asking Now-Husband what he himself had given my mother. Mom's last Valentine's Day card to Dad is not funny or self-deprecating. It is full of the gratitude of a grown woman unafraid of sharing every part of herself with her partner:

When I get upset over the problems that we come across, you calm me. When I am too sick to care about myself, you comfort me. And when I am depressed about my brother, you soothe me… I love to cuddle up next to you in bed when I feel so cold and you feel so warm. I guess what I'm trying to say is I love you and always will.

My father took my hand and walked me down the aisle on May 26, 2019, a few days after what would have been my parents' 40th wedding anniversary.

Mom and I were irreparably changed by our grief. We could be hard to love. But my god, we were—and are—loved. Ten years after her death, reading her letters was a reminder that I was worthy of that kind of love, too.

Jessica Pearce Rotondi is the author of "What We Inherit: A Secret War and a Family's Search for Answers," which Salman Rushdie calls "exceptional." Her work has been published by The History Channel, TIME, Reader’s Digest, Salon, Atlas Obscura, HuffPost, and Refinery29. Previously, she was a senior editor at HuffPost and a staff member at the PEN American Center, the world’s oldest literary human rights organization. Her first job in New York City was at St. Martin’s Press, where she had a “room of her own” in the Flatiron Building to fill with books. Jessica is a graduate of Brown University and is currently an editor and writer based in Brooklyn. Connect with Jessica on Twitter and Instagram @JessicaRotondi or visit JessicaPearceRotondi.com.