Confessions of a synesthete: What it's like experiencing the alphabet in full color

One year, my students made me recite the entire alphabet in October. A scribe recorded my answers to test me in May 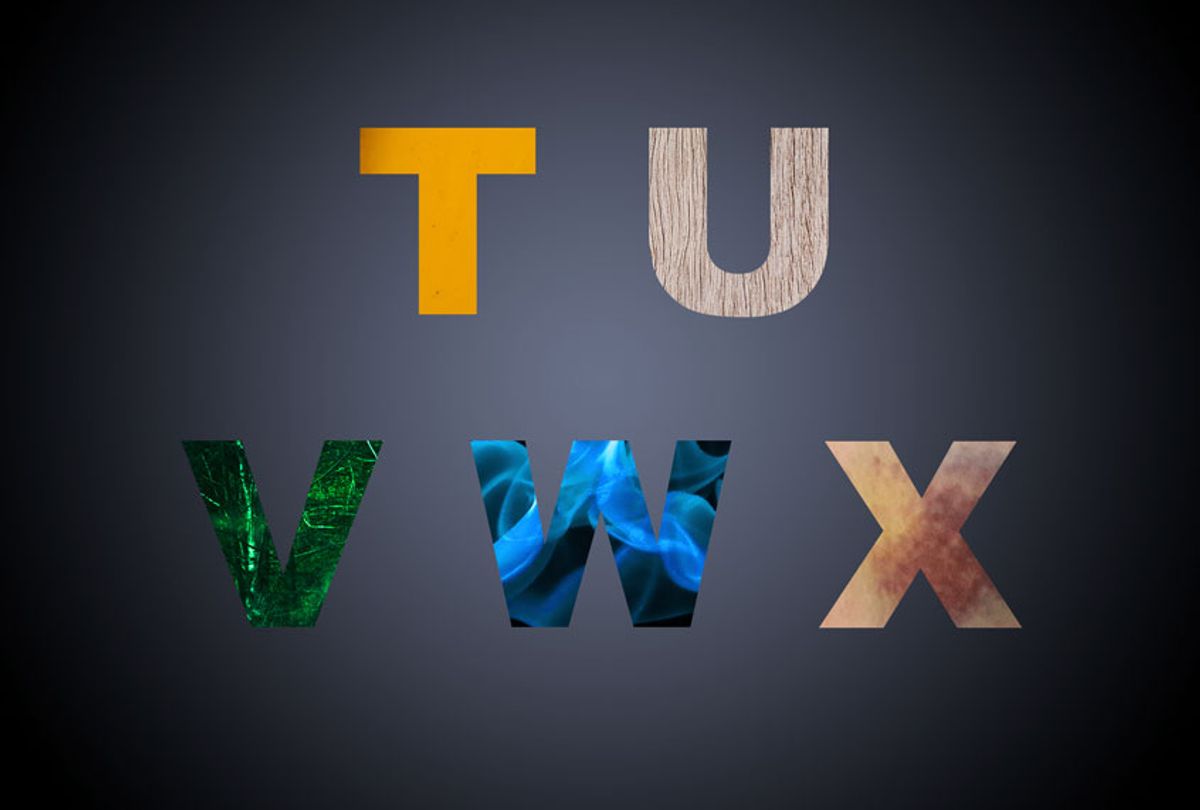 A is candy-apple red, the first color of the rainbow and my name, everything's blood-beginning.

Are you sure you didn't just memorize the colors from those alphabet charts in kindergarten? a skeptical tenth grader asks when I explain.

I was an adult before I learned this condition of mine had a name—or that it was a condition. Until then, I thought everyone had synesthesia. Even the word is a seductive ploy, a mingling of yellows, oranges, and reds punctuated by blue e's and just enough evenly spaced ghost letters—y, i—to give the whole word a mysterious, plexiglass cast.

Synesthesia is defined as the production of a sense impression by the stimulation of a different sense. My letters have colors, but some people associate musical notes or numbers with color. Some synesthetes experience taste as a combination of shape and texture, pointy chicken or smooth-as-glass chocolate mint. The condition is believed to stem from crossed connections in the brain, maybe a result of decreased pruning, a watercolor bleed of information that makes those of us who have it perceive the universe as looped, interwoven, inextricable — and that makes me see B as brown.

See? a student calls. A for apple, b for brown!

What shade of brown? someone less certain asks.

A warm brown, I say. Like a baby bear in a picture book. The brown, scribbled line of earth in a child's drawing.

C stumps them: creamy, soft yellow, like butter-colored velvet, with none of A's crystallized gloss.

Wait, they have texture, too?

Not exactly. It's more like properties of the color itself — some slick and clear, some furred, opaque. (Duke Ellington, another synesthete, understood how texture and color fuse into essence: "If Harry Carney is playing, D is dark blue burlap. If Johnny Hodges is playing, G becomes light blue satin.")

The handout on poetic devices, face-up and forgotten on my students' desks, is how we got here: synesthesia as literary device, describing one sense in terms of another. My example comes from an Anne Sexton poem: "God has a brown voice, as soft and full as beer." My students are much more interested in the condition, though, than poetry.

D is the cloudy bottle-green of tumbled sea glass.

E is royal blue, verging on navy, and it shifts and deepens like the sea, depending on the letters around it.

F is a smeary purple, more gray than grape, a wisp of decay around its edges.

People speculate, and in some cases can confirm, that certain writers experienced synesthesia, including Baudelaire, Rimbaud, and Virginia Woolf. Rereading Woolf newly attuned to color, I notice that precise tints and hues daub nearly every paragraph: birds' breasts are "specked canary and rose," morning air is "grey-blue," brooches "sea-green." And in the first chapter of "The Waves," which takes place in a classroom, one girl, Susan, says, "Those are white words...like stones one picks up by the seashore."

The most famous, though, is Vladimir Nabokov. In his memoir, "Speak, Memory," Nabokov recounts his alphabet as I do here, with enviable succinctness ("oatmeal n, noodle-limp l, and the ivory-backed hand mirror of o take care of the whites"). He acknowledges what I have feared since beginning this essay: "The confessions of a synesthete must sound tedious and pretentious to those who are protected from such leakings and drafts by more solid walls than mine are."

Years ago, I sat one afternoon with my friend V, a fellow synesthete and writer, at the long wooden table her husband had built. We mocked up our respective alphabets in pastels. Neither of us had ever written it out before, seen it made real outside our minds. The five children we would have collectively were still eggs inside our ovaries, crayons tucked in dark boxes, their colors unknown. Blue hydrangeas floated in a bowl. Her dog, Bayou, whose fur and name were the color of syrup—tawny, light-streaked, with reddish undertones—lay at our feet, his massive head resting on dirty paws.

That afternoon we coined the term "ghost" for letters that aren't colors in and of themselves so much as metallic receptacles to absorb and reflect the hues of letters around them. Zinc, pewter, iron, steel. My ghost letters (G, I, K, L, Q, R, W, and X) appear as if under a film of ice, embalmed in a substance both distancing and distorting. Ghost letters are chameleons, somehow untrustworthy.

The house where V and I sat with live oaks waving outside in the salt air is now sold; her marriage, busted; the dog, buried in the sandy soil; our paper alphabets, lost.

For his synesthete companion, Nabokov had his mother. They discovered this fact when, at seven, he remarked to her that the colors on his alphabet blocks were "all wrong." She knew exactly what he meant. Some of their colors overlapped, as do some of mine with V's, and some of mine with Nabokov's ("Nabokov and I both have a 'steely X,'" I imagine myself saying, tediously and pretentiously).

Beyond G's ghost realm, H is a pale dusty brown, a pine-straw prick. I is ghost; J is jade, rock-hard and angled. K is ghost, nestled next to ghostly L. M is the reddish-brown of a new calf's spots. N is the glassy orange of hard candy, an accent wall in the words where it appears. Unlike in Nabokov's alphabet, my only white letter is O; milk in a pan, about to boil.

One year, my students made me recite the entire alphabet in October. A scribe recorded my answers to test me in May. I was sure they'd forget, those capricious 16-year-olds who color my days, but they didn't. The alphabets matched; my students were converted.

P is a foggy green, like split-pea soup. Q is ghost, as is R. S, a hollow thread of straw.

My mother, a former English professor, takes pride in my synesthesia, as if it provides biological confirmation I was meant to be a writer (though it's not as rare as was once thought—as many as 4% of the population may have synesthesia).

Shortly after we learned of it, my mom asked my colorblind brother, apropos of nothing, "Do you see letters in color?"

He listened patiently as we explained synesthesia, interrupting each other as usual, and then said, "Well, I don't think it's fair that I didn't get some colors, and Anne got extra."

T is a smooth, creamy orange, like mashed butternut squash. U is the clothes-pin beige of unfinished wood. V, a green almost-ghost, a blade of grass in frost. W is a blue ghost, changeable as water, or whales. X is a fading bruise.

So when you're reading words on a page, do they show up in color? my students persist, eager to keep us from the next poem a while longer.

Text is black-and-white, I explain, just as it is for you. It's more like the colors show up in my mind. The colors are connected to the meanings of words, the way I perceive them, not the way I see them.

By now, some students think I made the whole thing up. Others want to google different types of synesthesia and see which, if any, they have. They all wonder why this phenomenon exists.

Neurologist Vilayanur Ramachandran theorizes that "the gene that produces synesthesia confers a propensity towards metaphor" and suggests that associations—murkily present for everyone—may "become more explicitly manifest" for people with synesthesia. No conclusive research has yet proved this theory true. Still, like my mom, I confess to harboring a romantic suspicion that synesthesia might partially explain why I feel such fondness for letters and words, why I spend so much of my time writing, reading, and teaching teenagers to read and write.

When I visit V, I mention I'm writing about our lost alphabets.

"Our paper alphabets aren't lost," she says. "I have them. Hang on."

She pulls a sheaf of folded paper from a notebook tucked in a basket under her sons' air hockey table. "Aha! I don't know what it says that I keep them with all the eulogies I've ever written."

I stared at the papers. Instead of shading in the letters with pastels, we'd just jotted down descriptions of the colors, in black ink. Memory has failed me. And yet, when I read the weirdly precise descriptions—weathered dark brown, like old wood; clear but with lavender tint (like thick plastic)—the colors match, and I feel the familiar jolt of relief: I was right about myself. Despite all that's changed in forty years—addresses forgotten, grandparents buried under pines, children sprung whole-cloth, the kite-string patter of days unspooled— it's comforting to think my letters (golden-suntan Y, the brassy glint of Z) are hard-wired, and maybe even protected against loss.