As Airbnb grows in Cuba, locals suffer the emotional burden of entitled tourists

Unused to the fake smiles innate to the gig economy, Cubans bear the brunt of Airbnb's emotional labor 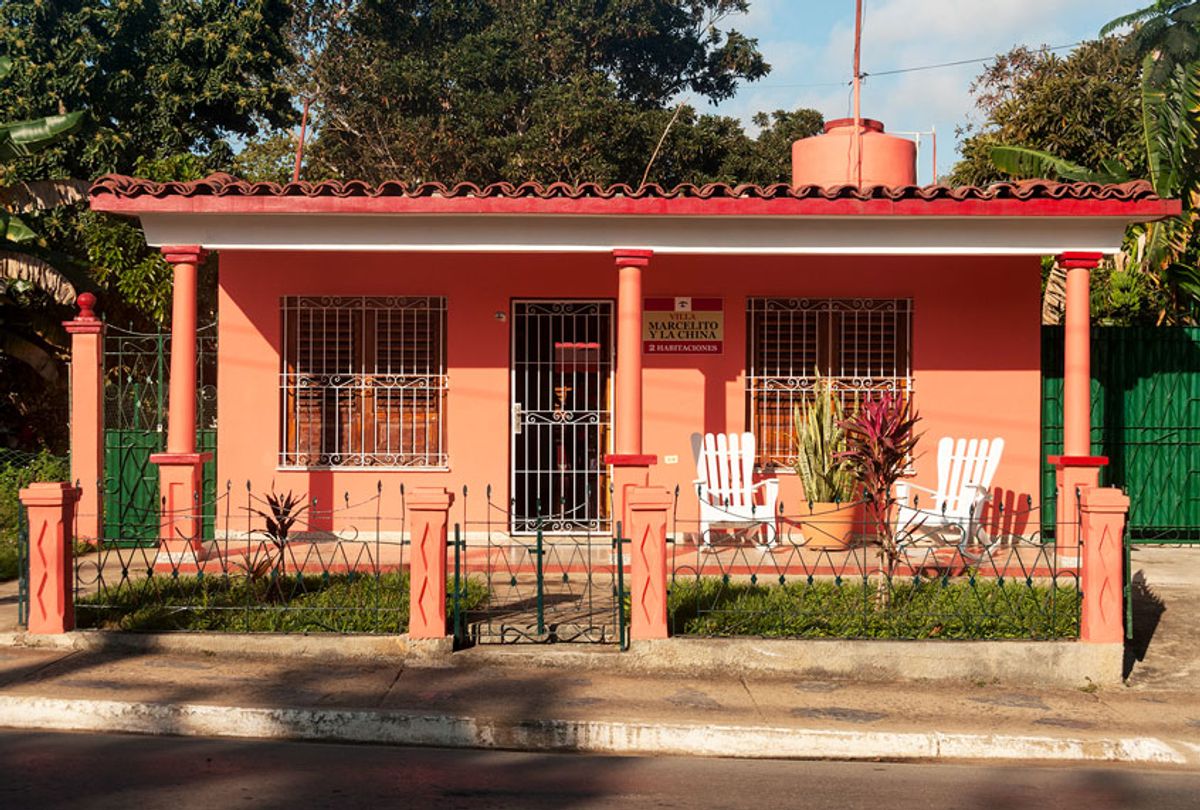 I first visited Havana in December of 2015 when I was researching the expansion of broadband Internet on the island. At the time, Cuba was seeing an increased number of Wifi hotspots following a partnership with Venezuela for the deployment of the submarine fiber cable ALBA-1. Because a vast majority of undersea cable was owned by American companies — and Cuban companies were barred from accessing these under the American embargo — a partnership with Venezuela was the only way for Cuba to access to the broadband world. During my visit, I booked a stay with a Cuban family through the traditional manner of booking a bed and breakfast: the Casa Particular.

The practice of renting private accommodations, or Casas Particulares, in Cuba, dates back to 1997 when the government allowed Cubans to rent out rooms in their homes as an alternative source of income. Given the lack of Internet access, the reservations were made by phone or in person. Since 2015, with the expansion of broadband internet and Airbnb operations, Cuban hosts have seen the online platform a new way to advertise their rooms and increase their income, as discussed by Carlos, 45 years old:

"Before, I didn't know how to advertise my rooms. I had to rely on friends' referrals or taxi drivers who picked up tourists at the airport. Now I can show my rooms on Airbnb, and ever since I haven't had these rooms empty for more than 4 days [...] before, they were empty for months."

Airbnb entered the Cuban market in 2015 when the U.S. loosened its travel restrictions in the country. The Casas' ready-made supply, with regulations, registries, and taxes in place, made it easy for Airbnb to proliferate on the island: in 2017, Havana was one of the most popular destinations among Airbnb users.

However, while most hosts were excited by Airbnb entering the market, they didn't anticipate that, as hosts, they would often be expected to go beyond their traditional role of simply providing accommodations to their guests. In some cases, being a host required emotionally demanding labor, such as coping with exhaustion while "putting on a smile." The costs of emotional labor stemming from the growth of access to platforms such as Airbnb affected not only Cuban hosts but also non-hosts impacted by the neighborhood changes.

Emotional labor, according to Alie Hochschild, is the management of personal feeling: "it requires one to induce or suppress feeling in order to sustain the outward countenance that produces the proper state of mind in others. It runs the risk of [estranging] workers from their own smiles by intervening in the pursuit of profit between the smiler and the smiled upon."

Although Airbnb provided an improved experience, managing a profile and communicating with guests were still difficult since the internet in Cuba remained scarce and expensive. The hosts I interviewed mentioned that they often received angry messages and threats of cancellation from white guests. According to Carmen, 42 years old:

"We [Cubans] don't have internet at home. It's hard and expensive to connect every day. It's very stressful to maintain my Superhost status. They [tourists] don't understand our situation — I get angry messages asking why I take forever to respond. I don't want to lose any guests or my status, so I always reply apologizing and with a nice note, but I don't feel like myself when I do that."

Airbnb guests often failed to understand the burden that comes with being a host in Cuba, even after arriving in Havana and seeing their reality first-hand. Hosts complained that guests were curious about Cuba and asked questions that led to 2 to 3-hour conversations. Questions went from: "When are you escaping to Miami?" to "Do you believe in Jesus Christ?" Maria, an Airbnb host in [Havana?] said.

"Every time there's a new guest, they consume about 2 hours of my day. It's exhausting! They want to know if we hate the US if we make enough money to survive, if we can get passports, etc. I appreciate the interest but I have my other job. Because the ratings are so important on Airbnb, I have to pretend I'm enjoying the conversation."

It is necessary for Cuban host to perform this level of emotional labor — taxing on the hosts themselves and a departure from the traditional norms of the Casas Particulares — in order to maintain good ratings on Airbnb and maintain the platform's coveted "Superhost" status. Herman, a 38-year-old host, reminded me:

"You were here last night, you saw that I spent 1 hour and 45 minutes explaining everything to them [tourists]. I told them to not buy anything on the streets and today you saw what happened, they bought tobacco from a dealer [...] the cops saw everything and took everyone to the PD. I had to leave my other job, get them out, and in the end, they asked for some coffee. [sigh] Tourists think things are available and in abundance here in Cuba, just like in the US. I was very patient, I hope they value that. "

Although Airbnb required more emotional labor, every host I interviewed was very pleased to have an impressive increase of reservations and income due to the online platform, which motivated other Cubans to renovate their homes to offer the same service. During my first visit in 2015, I counted 14 rooms for rent on the block of Manrique Street in Center Havana. The same block had, by my count, 82 rooms available when I returned in July of 2018.

The proliferation of rooms caused by the rise of Airbnb also led to emotional labor-related externalities borne by the impacted communities. The landscape of the community had changed; many homes had completed unauthorized renovations and the influx of tourists had changed the social dynamics of the area. "Center Havana has never been one of the nicer parts of the city, we have been marginalized for ages, but now with this [Airbnb rooms], we have tourists wanting to live the authentic Cuban experience. When I'm walking around or going to the market, they look at me as if I was a character of an amusement park like I'm a toy and part of their playground," complained Judith, a 45-year-old resident of the area.

Airbnb was Disney-fying parts of Havana that were not meant to be for tourists. Locals emphasized that, where the area had felt like home because they walk freely and mind their own business, they now felt pressure to talk or take pictures with visitors. Judith continued:

"When I go to the market, I'm stopped at least three times by tourists wanting directions, pictures with me, or if I can help them buy something. This annoys me, but I put on a smile and try to help, otherwise these foreigners will say that Cubans are rude. "

In Havana, locals have their own neighborhood markets that are subsidized by the government where they can spend their Moneda Nacional (Cuban Peso Nacional), a currency exclusively for Cubans. However, tourists now head to the markets in search of an authentic Cuban experience and buying up the markets' supply. This leaves locals without any options and often waiting for days for the markets to be restocked.

The constant flow of tourists was also a concern to Fernando, 42 years old:

"I don't recognize the people here anymore. I come to this park to play domino with my friends, but I see people speaking English or German on our bench, drinking beer at our game table [...] and I can't call them out, I don't know their language, I don't know who they are, who their families are. I have to hold myself. It's too bad it's hard to meet people from my own neighborhood."

Although Airbnb doesn't acknowledge or address the emotional labor imposed onto Cubans, they have certainly capitalized on such labor by advertising the authentic experience. That's a way to attract more customers and provide a unique experience at the exploitation of others.

In 2018, when I reached out to Airbnb's customer support and tried to discuss these issues related to emotional labor, the answer I received was that these issues were actually caused by the lack of proper access to the internet; that access to the internet was increasing and Cuban hosts would have a better experience when interacting with guests. This response shows us exactly how Silicon Valley operates — it operates on techno-solutionism, in which the solution to people's problems is actually more technology, as if technology that people use were not embedded in a network with different power structures… such as Trump's latest restriction on Cuba and the Cuban Government doubling down on online censorship.

Airbnb is not truly willing to solve people's problems: when it comes to their own problems, they know really well how to resolve them. Airbnb has spent more than a half-million dollars to lobby on its operations in Cuba — but they don't seem to have found a way to alleviate or compensate the emotional labor performed by Cubans.

While many Airbnb hosts in Havana expressed that the platform has benefited them financially, it's important to acknowledge the attendant costs. As my findings suggest, the proliferation of Airbnb listings in cities like Havana compel locals to perform emotional labor — often without direct reciprocation, and usually in the interest of value creation for companies like Airbnb.

As for the family I stayed with through Casa Particular, they ended up joining Airbnb and I still stay with them every time I go back, but the topics of our conversations have been mostly focused on the guests that they have hosted throughout the year. I can clearly see the exhaustion expressed on their faces as they vent about new guests. And as I observe new guests checking in, the shining eyes that welcomed me in 2015 are no longer there — but the smiles are forced on their faces so their stars could shine brighter on the ratings of Airbnb.

David Nemer is an Assistant Professor of Media Studies at the University of Virginia. His specialty is anthropology of technology and he is the author of "Favela Digital: The other side of technology" Follow him on Twitter: @davidnemer