As anti-Asian sentiment surges amid the growing coronavirus crisis, experts point to history & warn of consequences 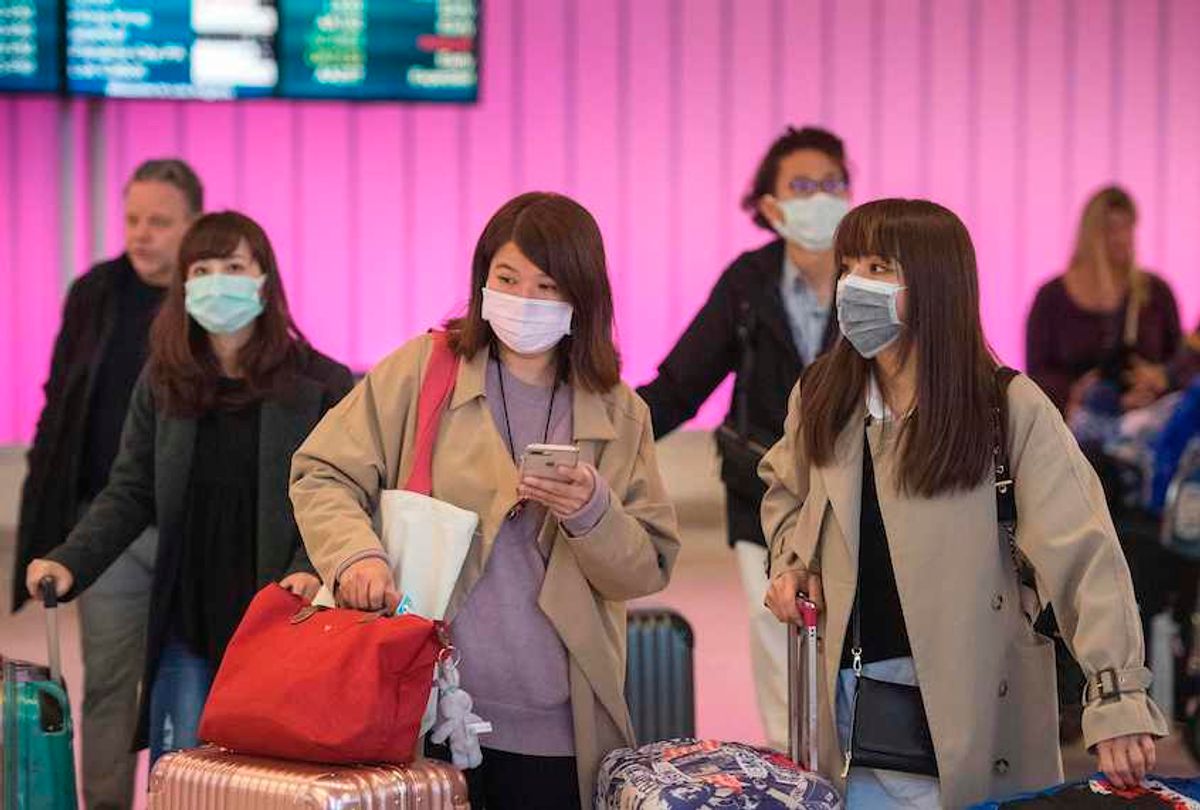 Passengers wear protective masks to protect against the spread of the Coronavirus as they arrive at the Los Angeles International Airport, California, on January 22, 2020. (Mark Ralston/AFP via Getty Images)
--

Caleb Kim made sure to follow his nurse's orders. After catching the seasonal flu in late January, he stayed home — only leaving when his fever had broken for 24 hours without medication. Feeling better and faced with school work, Kim, a Korean American undergraduate student at Yale University, wore a medical mask to help stop the virus from spreading.

But when Kim entered a campus dining hall, he noticed students exchanging wary glances. "I became all of a sudden very self-conscious of the fact that I was wearing a mask and that people seemed to be avoiding me," Kim wrote in a Facebook message to Undark. While outside on the New Haven, Connecticut campus, Kim detailed in a Facebook post that a driver stopped to yell: "Where are they giving out the SARS masks?" referring to the 2003 viral outbreak stemming from China. "I kept my head down while walking to class because I was embarrassed," Kim told Undark.

The recent marginalization of people who are or appear East Asian hardly stops with Kim. The now widely-reported coronavirus causing flu-like symptoms around the globe was first detected last December in Wuhan, a city in China's Hubei Province. According to the World Health Organization, the rapidly spreading virus has now infected more than 45,000 people across 25 countries, and killed 1,115 (mostly in China), stoking racism and xenophobia. (On Thursday, China reported an even higher number of cases due to a new reporting method.)

Online, users have brazenly leveraged the animal-to-human transmission of the virus — thought to stem from Chinese markets selling wild animals for consumption — to spread hurtful stereotypes about Chinese eating practices. "At this point, I don't think China could do anything that would really make me stop and be like, 'For real?'" wrote one Reddit user in a post receiving more than 11,800 upvotes, or likes, before a moderator removed the comment. "They have entered the zone where even the most far out, fucked up, and disgusting imagined scenarios play out on a daily basis."

The reaction, apparently, has even trickled down to youth: On Twitter, former Ontario Medical Association President Nadia Alam wrote that her half-Chinese son was cornered at school by other students who wanted to test him for the coronavirus: "They chased him. Scared him. And made him cry."

To historians and public health researchers, the racialized responses to the emerging coronavirus are nothing new. From 14th century plague to HIV/AIDS and the recent round of Ebola, infectious disease outbreaks have often coincided with surges of prejudice and marginalization. "[It] strikes me as extraordinary," said Frank Snowden, an emeritus professor of history at Yale University, "that we seem unwilling to learn the lessons of the past."

Weeks since the coronavirus first appeared, it's still unclear how far the new virus will spread and to what heights anti-Asian sentiment will spike. But as historians and researchers look back at past outbreaks, they say that the recurrence of stigma not only fails minority communities but also risks exacerbating outbreaks as people weigh stigma with seeking treatment.

"If the message is really about fear and panic and social distancing, then you end up isolating people," said Nayan Shah, an American studies professor at the University of Southern California. Such isolation can scare people off from coming forward and seeking care, Shah added, while others may decide not to seek treatment because they feel as though their symptoms don't "align with the racial or sexual body type that they have."

In the 14th century, Europe had descended into chaos. In a six-year span, a disease — marked by swollen lymph nodes in the armpit, groin, or neck — as much as halved Europe's population. At the time, Jewish people were scapegoated for the pestilence: One incident in present-day France saw 1,000 Jews burned alive after the group was accused of poisoning wells.

More than 500 years later, scientists had yet to crack the real story of how the seemingly indiscriminate disease, called bubonic plague, moved through society. By the time a resurgence made its way to San Francisco in 1900, writes journalist Marilyn Chase in "The Barbary Plague: The Black Death in Victorian San Francisco," the best theories science offered included transmission via dirt, food, and miasma — a now disproved idea that disease spread through tainted air.

At the time, San Francisco, like most early 20th century cities, lacked a suitable public health infrastructure: The streets were lined with open sewers and strewn with trash and other waste, which primed the city for frequent disease outbreaks like cholera and tuberculosis. But as San Francisco became a trading hub, these outbreaks became associated with the influx of Chinese immigrants into the city. "There was concern, specifically about the Chinatown neighborhood, as a site and source of disease being incubated and spread," said Shah.

Occupying just 12 blocks but housing roughly 20,000 to 30,000 of San Francisco's more than 342,700 residents, Chinatown, Chase wrote, with its "temple incense, pork smokehouses, and opium vapors," was at the butt of local myths for being "noxious to white nostrils." And when bubonic plague entered the west coast trading hub, Chinatown took the blame. Without clear evidence, officials briefly set up a quarantine of the neighborhood — skirting nearby white-owned shops. They also considered subjecting the immigrants to an experimental vaccine regimen. Meanwhile, the media caricatured the ordeal. Sketches of pigtailed immigrants or germs on Chinese scrolls appeared in newspapers, Chase wrote, and a mock obituary from the San Francisco Call likened the quarantine station Angel Island to a "bubonic germ stock farm." When panic recessed, she wrote, the "epidemic, once extinguished, was all but forgotten."

But even as the plague itself escaped public memory, the association between immigrant centers and disease persisted. When the 2003 outbreak of the respiratory illness SARS, also a coronavirus, spread from Asia to Canada, people deserted Toronto's Chinatown restaurants and shops out of fear that they would contract the virus — even though Toronto's outbreak mostly affected the greater Toronto area. Meanwhile, media reports added to the public's association of Asian people with SARS. Images featuring face masks, according to York University sociology professor Harris Ali, became salient as the outbreak gripped international headlines. These "innumerable pictures," writes medical anthropologist Laura Eichelberger, "racialized the epidemic by identifying Asian bodies as the source of contagion, contributing to their stigmatization."

To Snowden, the Yale professor, cultural legacies of these infectious diseases have again resurfaced as the coronavirus stirs up old stereotypes. For Kim, the Yale student, the renewed stigma meant enduring harassment while recovering from the regular flu. For children, it meant more than 9,000 people demanding a Toronto suburb school board track recent student travel to "not just Wuhan, any city of China." And for people from mainland China traveling abroad, it has meant being denied service at restaurants and hotels in neighboring countries like Vietnam. "It just goes to show that the disease is no longer just a disease," Kim told Undark. "It's also a vessel for racism and stereotyping."

The new coronavirus has also contended with racialized nicknames. In late January, a French newspaper, Le Courier Picard, was widely rebuked for using "yellow alert" and "yellow peril" in its coverage of the virus. Still, academia has historically associated places with disease: The Ebola virus was named after a river in the Congo and the viral illness Middle East Respiratory Syndrome, or MERS, stems from its origins in the Arabian Peninsula. International news outlets have parroted these old academic tropes opting for "Wuhan coronavirus" or "China virus" in their coverage of the current outbreak. This week, the World Health Organization officially named the disease caused by the virus COVID-19.

"We don't want to label and stigmatize people in their communities," said Steffanie Strathdee, an infectious disease epidemiologist at the University of California San Diego. "We have a history of doing that." She pointed toward HIV/AIDS as an example. As members of the gay community were among the first in the United States to contract the mystery illness, scientists originally referred to the disease as gay-related immunodeficiency, or GRID, before switching to acquired immune deficiency syndrome, or AIDS, soon after.

For Chris Beyrer — a public health and human rights professor at Johns Hopkins Bloomberg School of Public Health as well as a former president of the International AIDS Society — the rise of AIDS and its stigma coincided with his medical education. He remembered hospital staff refusing to bring food to AIDS patients. And if the patient was not accompanied by family or acquaintances, he said they would simply go without food. "It was terrible," he added. Elsewhere, in politics, conservative commentator William F. Buckley Jr. called for marking those with AIDS with tattoos. And when the journalist Lester Kinsolving called AIDS the "gay plague" at a 1982 White House press briefing, Reagan Press Secretary Larry Speakes joked back that Kinsolving was gay since he knew of the disease — eliciting laugher from other reporters.

The era "was so intensely painful to see that and live through," said Beyrer. "Friends were getting sick, and I lost my first partner to AIDS in 1991."

Today, Strathdee said the stigma associated with the virus still discourages some to seek HIV testing and has promoted its transmission. And as countries worldwide contend with the new coronavirus, the same reluctance to seek care "could be a problem," according to Beyrer, "particularly in other parts of China where people from Wuhan may be facing discrimination and stigma already."

In December, during the crucial early days of the coronavirus outbreak, The New York Times and others have reported, the local Wuhan government withheld information and underreported infection. Human Rights Watch, a U.S.-based non-governmental organization, condemned the practice along with the country's censorship of social media and detainment of people who posted about the virus online. By some accounts, China has been accelerating its response to the coronavirus, shuffling top officials in what the Associated Press called a "desperate attempt to contain the virus." But other reports suggest that rapidly-built new hospitals are treating relatively few patients and that many individuals quarantined in Wuhan are not receiving proper care.

In the U.S., which according to the Centers for Disease Control and Prevention has confirmed 15 cases of coronavirus so far, "the response has been exceptional," said Leana Wen, an emergency physician and visiting professor of health policy and management at the George Washington University Milken Institute School of Public Health. The CDC, the National Institutes of Health, and "experts in our U.S. government have been acting out of an abundance of caution and doing everything that is best practice by public health standards."

But Strathdee noted that sensationalized stories persist in news and on social media, where "misinformation spreads faster than the virus itself," and she stressed the value of awareness that exaggerated or inflammatory stories are "part of the problem rather than the solution." As for stymieing fear and panic, Wen said that people must trust that ongoing public health initiatives to contain the coronavirus are implemented in their best interests. "That means that the government —  no matter if it's the U.S., or China, or anywhere — must be transparent," said Wen. "They must give accurate information to the best of their knowledge, so as to engender that trust within their residents."

Marisa Peryer is a freelance science writer. Her work has appeared in the Columbia Journalism Review, Milwaukee Journal Sentinel, and the Yale Daily News. Follow her on Twitter @marisa_peryer.