The empathy gap, and what it's like being trans in the workplace 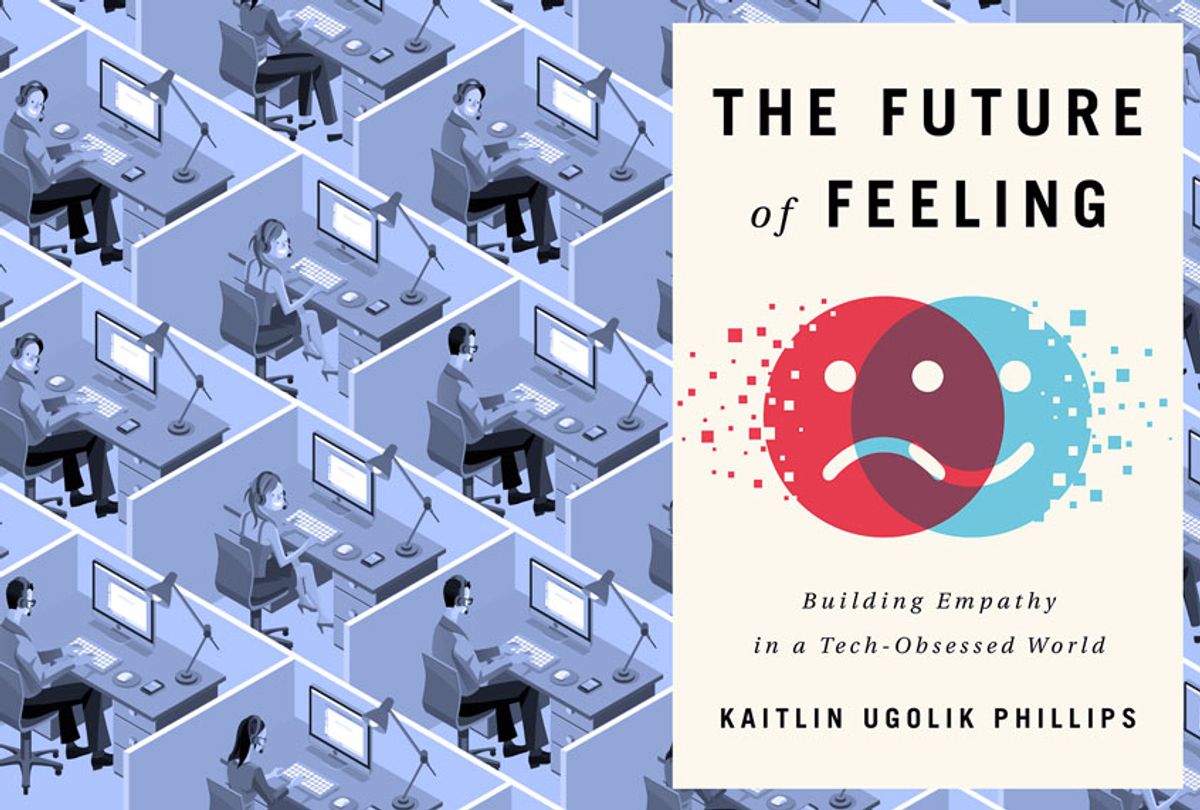 Excerpted from “The Future Of Feeling: Building Empathy in a Tech-Obsessed World” by Kaitlin Ugolik Phillips. © 2020. Published by Little A, February 1, 2020. All Rights Reserved.

By her own admission, Natalie Egan spent years living in a bubble. As a successful entrepreneur with highly coveted venture-capital suitors, her experience was far from the norm. At the time, Egan, a transgender woman, looked to the world like a man in an industry dominated by men.

"We're naturally wired with empathy, but I think the particular dynamic I was in can really isolate people from reality and the rest of the world," she told me when we spoke on the phone.

Then she came out as a trans woman, and the empathy gap became clearer to her than it had ever been. As she started to move through the world perceived as a woman instead of as a man, she couldn't help but notice how differently people treated her.

"I went from being in a privileged space to being on the outer edges of one of the most marginalized communities in the world," Egan said. In a sense, Egan had always known what it was like to be an outlier, but now she would be fully living her life that way. The differences made themselves apparent almost immediately. She suddenly noticed things about her peers in the startup space that she hadn't noticed before—for example, the way they talked about people outside their circle. Egan was still in that circle, but she could now see it differently: Egan herself was subject to offensive language and jokes made at her expense. She remembers experiences while shopping or attempting to conduct a business meeting when people wouldn't look her in the eye. This is a familiar situation to countless LGBTQ people around the country. And it hurt. But Egan still had the advantage of her education, experience, and network. So she decided to approach the issue of this apparent empathy gap with a startup, and Translator was born. At first, it was meant to be a social network for the transgender community, but pretty soon the mission expanded by necessity. As Egan shopped the idea to investors, she kept running into roadblocks: so many people simply didn't understand the problem she was trying to fix. So, ever flexible and adaptive, Egan reframed again: Translator would take on the job of making the empathy gap clearer, and then try to close it. She wanted her peers in the business world to understand just how divergent from each other the experiences of people of different genders in the industry could be. Translator soon morphed into a vehicle for technology-assisted diversity-and-inclusion experiences for organizations and corporations of all sizes. The company uses chatbots, apps, and customized virtual-reality experiences to expose employees at organizations like the New York City Department of Education and NBCUniversal to the experiences of women, gender-nonconforming people, people with disabilities, and people of color around and among them.

When we spoke on the phone, Egan asked me to imagine sitting in a typical diversity-and-inclusion training. I wanted to yawn just thinking about it. In my experience, this usually means sitting in an uncomfortable chair for an uncomfortably long time listening to a long list of uncomfortable scenarios—some of which I have experienced myself, and some I never will: being touched inappropriately, being referred to with a slur, being constantly interrupted by male colleagues, etc. To make things more interesting—and, hopefully, effective—Translator concentrates on a force at the root of most of this behavior: unconscious bias, or the tendency for all of us to internalize and often perpetuate stereotypes about those who are different from us. We might not have conscious thoughts of bias, sexism, racism, or stereotyping, but the culture we live in sometimes makes those things inevitable on an unconscious level. Activists and entrepreneurs like Egan hope to make those unconscious biases more obvious, ideally making them easier to quash.

Translator approaches this in a few different ways, but Egan says the most effective are those that incorporate technology into interactive group activities. One activity commonly used in diversity-and-inclusion workshops is "the privilege walk." Participants line up and take steps forward or backward based on how they identify with statements read by a facilitator. I would take steps forward for "One of my parents works a white-collar job" and "I was told that I was smart and capable by my parents," and steps back for "I've been paid less or treated less fairly because of race, ethnicity, gender, or sexual identity," for example.

I wouldn't move at all for "I was raised in a single-parent household" or "I went to school speaking a language other than English" because those don't apply to me. At the end of the exercise, the different struggles and advantages of everyone in the room become stark based on where they stand. It can be powerful, but it can also be very upsetting—potentially unproductively so—for people who aren't prepared to really understand the context and implications of the exercise. Feeling anxious, embarrassed, and guilty can make empathy pretty difficult.

Translator offers a privilege-walk exercise, but it's conducted anonymously, via smartphone. The results are shared with the whole group, but names are erased. In another module, a Translator facilitator asks people to list all the stereotypes they feel others associate with them, or that they might associate with themselves. A common answer, especially from men and participants of color, Egan told me, is "threat." Instead of doing this on paper, Translator does it through an anonymous web- based app. Suddenly what was once an awkward exercise of reading vulnerable lists in front of coworkers becomes more private, and therefore sometimes more honest. It also has the counterintuitive effect of requiring participation while preserving privacy. Everyone's answers are displayed to the group on a host screen, the anonymized data showing how many people listed each stereotype.

"The group has the experience of learning without having anyone in particular volunteer information," said Egan. Critics argue that this strategy removes responsibility from the exercise, but Egan thinks it actually benefits the most stereotyped people in the room by not "otherizing" them in discussions about marginalization.

In one session with two hundred participants, in less than four minutes the app had captured more than 1,200 stereotypes. The screen at the front of the room showed a huge word cloud of all the words. It was alarming. It looked like about 25 percent of the people in the room believed they were stereotyped as "weak." One woman raised her hand. She looked to be on the verge of crying.

"I thought I knew everyone here," she said. "I had no idea how differently we all see ourselves."

"It was such an interesting statement," Egan said. "She's in a room with two hundred people she had been working with for years. That moment where she realized she may look around and say, 'We all have privilege but we're all kind of the same people,' all of a sudden that got completely blown apart. She was exposed to so many different perspectives of how we see ourselves in the world. That, for her, was a really powerful moment."

Egan admits these exercises sometimes make people angry. "People realize their privilege, but then they're also in a very awkward position in the room with a lot of people who may not have the same level of privilege," she explained. "We had one individual really express in a training how angry they were, not with anyone else, but with them- selves. They said, 'Well, what do I do with my privilege?' He had this epiphany moment in front of everybody."

Now Translator is working on an even more visceral experience. The company is building bespoke VR experiences for its clients, including ViacomCBS and Slack. Egan described a potential VR experience that will put employees in a work-related situation, a social situation, and on a dark street at night, and help them understand their own biases about different types of people they might come across in each. Rather than simply asking yes-or-no questions, the experience will have the user swipe their hand left or right, engaging them on multiple planes. The feelings that come up in tests of this experience are not always pleasant or charitable, but that's the point. And Egan told me that for people open to the experience, it can have a transformative effect.

"It's amazing, when you change the context, how much people's attitude and behavior shifts," she said.

In describing this phenomenon, Egan evoked what she sees as the three pillars of empathy: self-awareness, peer awareness, and action taking.

"Those three things are hard to bring together in a single training or a single experience, but VR can really help you do that," she said. Self-awareness is immediately impacted by the fact that, during a VR experience, you don't feel like you are yourself. That activates a type of thinking that's hard to simulate just by imagining someone else's experience. "Layer on the idea of identities in context, and you now understand your identity a little better, and it lets you understand the identities of others around you as you interact with them."

This layering also allows Translator to collect a larger amount of data that helps clients see if the experiences are actually making a difference. Egan acknowledges that Translator can't eradicate unconscious bias in an organization, but it can make people more aware of it and at least start conversations about empathy. This is where the communication aspect of empathy comes up once again.

Kaitlin Ugolik Phillips is the author of “The Future Of Feeling: Building Empathy in a Tech-Obsessed World”.