"Low class" Donald Trump and the Wasps: Reckoning with vulgarity, snobbery and the presidency

Trump is technically at least part Wasp, but he's clearly deficient in several crucial areas of our shared culture 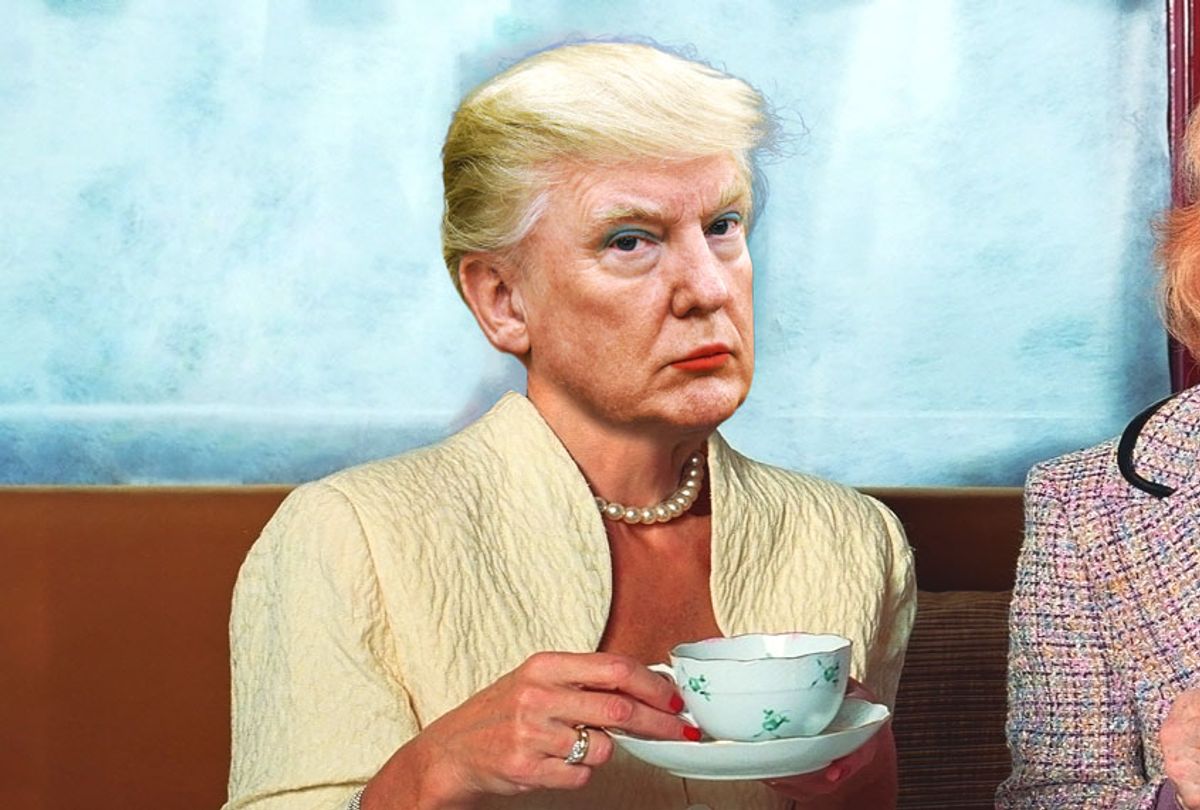 Try, just try to find a parody of a pair of Wasps more entertaining than Thurston and Lovey Howell of "Gilligan's Island." Played by Jim Backus, who was of Lebanese descent, and Natalie Schafer, who was Jewish, Thurston and Lovey behave the way people like to believe — and sometimes they're right — that real Wasps do: the Howells, possessors of fathomless inherited wealth, are duplicitous snobs who don't do any work. Some of the show's best lines nod to Thurston's blue-blooded Republicanism. When Lovey compliments him for being "democratic," he hears an uppercase D and snips at her, "Watch your language."

Thurston and Lovey are meant to be, like my ancestors of my mother's side, New England Wasps — in one episode, we're told that they're from Boston; another episode mentions a home in Newport, Rhode Island — but I don't recognize my family in the buffoonish Howells. True, my grandmother, whom I just about worshipped — she was quick-witted and cosmopolitan and tall, like Myrna Loy's Nora Charles in the "Thin Man" movies — was a Republican, and I did once witness her committing a Howell-ish act of snobbery. During a nostalgia road trip that brought us to her old neighborhood in Montclair, New Jersey, she described one style of residential architecture as "Wop," a derogatory term for Italian. She meant that the style looked modern, or like something that would never provide shelter for any self-respecting person whose ancestors came over on a boat in the queue behind the Mayflower.

If you had asked me about my background before Trump moved into the White House, I would have led with my father's Syrian side. (My long-legged, button-nosed maternal grandmother must have puzzled at the looks of me, short and with eyes and nostrils for days.) I saw my Wasp side as ethnically neutral — white bread that couldn't hold its own against all the more interesting loaves out there. But since Trump's presidency, I frequently find myself reaching for my grandmother's word, "vulgar," to describe him. You're using the word too, you say? Yes, but hopefully you're not using it with — what's this? — an involuntary air of condescension that I'm worried I may be mistaking for some sort of birthright.

I get why no one is standing on a chair and claiming Wasp as a cultural identity. Wasps went out in the mid-1900s, their markers — repressed colors, repressed emotions — swept aside in a cyclone of unkempt hair and pot smoke (some of it my mother's). Make no mistake: I'm as glad as anyone that Wasps got the cultural heave-ho — they'd been on top for far too long and have the whole snob thing to answer for. But last year I had some strangely gratifying eureka moments as I read Tad Friend's "Cheerful Money: Me, My Family, and the Last Days of Wasp Splendor." I recognized in it the window dressing of my childhood: Welsh rarebit. Beatrix Potter. "Grandfather clocks and cocktail shakers brimming with gin." Yes indeed, these were my people — much more so than my Syrian side. After my mother and father divorced when I was two I lived primary with her, our small house accommodating a condensed version of Wasp splendor. It was only after my mother died, in 2010, and I, her only child, inherited a squadron of antique end tables, which she told me on her deathbed I wasn't allowed to sell, that I realized I knew of no other person my age who had grown up in a home that resembled the set of "Leave It to Beaver."

Donald Trump doesn't live in a home that resembles the set of "Leave It to Beaver." Like the Howells, Trump is a Republican who inherited wealth and enjoys shiny things — his wives, his Fifth Avenue pile — and he delights in showing them off. This is how the Howells would fail a true-life Wasp sniff test: people with old money think that it's poor form to flaunt it. When I was a kid and behaved badly, my mother would accuse me of acting "spoiled," which only now do I appreciate meant like someone with a shamefully conspicuous amount of loot.

The Trumps and the Howells have something else in common besides their obvious pleasure in displaying their money: they love to talk about it. This trait makes me squirm even more than Trump's shticky name-calling, cotton candy hair, and allegiance to the trinity of lowbrow entertainment forms professional wrestling, reality television and the beauty pageant. No one ever explicitly told me why it's bad manners to talk about money, but I think the idea is that money is a personal matter, like hygiene, and that talk of it reflects a materialism upon which God (in whom my mother and grandmother unstintingly believed) would frown, which I hope it goes without saying is not remotely the same thing as implying that Wasps are above materialism. Of course, Wasps can get away with insisting that talking about money is vulgar because they generally have enough of it — bloody right my grandmother would have talked about the $54.17 she didn't have if she was in danger of losing her electricity because she couldn't pay her bill.

Where Wasps go wrong, I think, is mistaking bad manners for moral breaches. I have rampaged about Trump being "low-class" but then felt guilty because I know that someone's lack of decorum isn't a good reason to declare him unfit for elected office — I mean, a person should be perfectly free to talk about, say, what Hillary Clinton was doing in the bathroom during a debate break, as Trump did from the stage in 2015, and still earn my vote if he's solid on the issues, right? But as it happens, there are countless cocktail shakers brimming with sound moral reasons not to support Trump. For my grandmother, his greatest offense would have been his underhandedness: she was about nothing if not being aboveboard. (Again, I suppose she could afford to be, but let's give her this one.)

The best-known anecdote about my grandmother — it was trundled out at her funeral, in 1994 — is that well into her dotage she drove back to a store because upon arriving home she realized that the cashier had given her a few dollars too much in change. But I know a better, less funeral-friendly story about her. She had probably never voted for a Democrat in her life, but in 1972, her two hippie children convinced her that Richard Nixon was a crook, so she held her nose, clutched her pearls, and threw the lever for the uppercase D Democrat, George McGovern.

Just as I was idly and, it must be said, rather smugly assembling a mental list of Wasp virtues — we don't brag (Tad Friend writes of our "trademark self-deprecation"), we don't complain (although maybe we don't have much to complain about?), we invented noblesse oblige (because we could afford to, but still!) — it came to me that Trump, whose mother was Scottish and whose father was of German ancestry, is technically at least part Wasp. That took the glory out of my list making, as well it should have: I do know that Wasps haven't cornered the market on virtue. But may I claim for the Wasps just one trait that no one else would want, and with which, were it in my power, I would frost Trump's next beautiful piece of chocolate cake?

The whole point of being a Wasp, as best as I can conjure, is to get through life without embarrassing oneself in public. Trump's ancestors plainly failed to pass on this characteristic; otherwise, he would have known that — to use but one example of dozens — when someone flails his limbs in imitation of a disabled person, as Trump did at one of his rallies, it's not the disabled person who should be mortified.