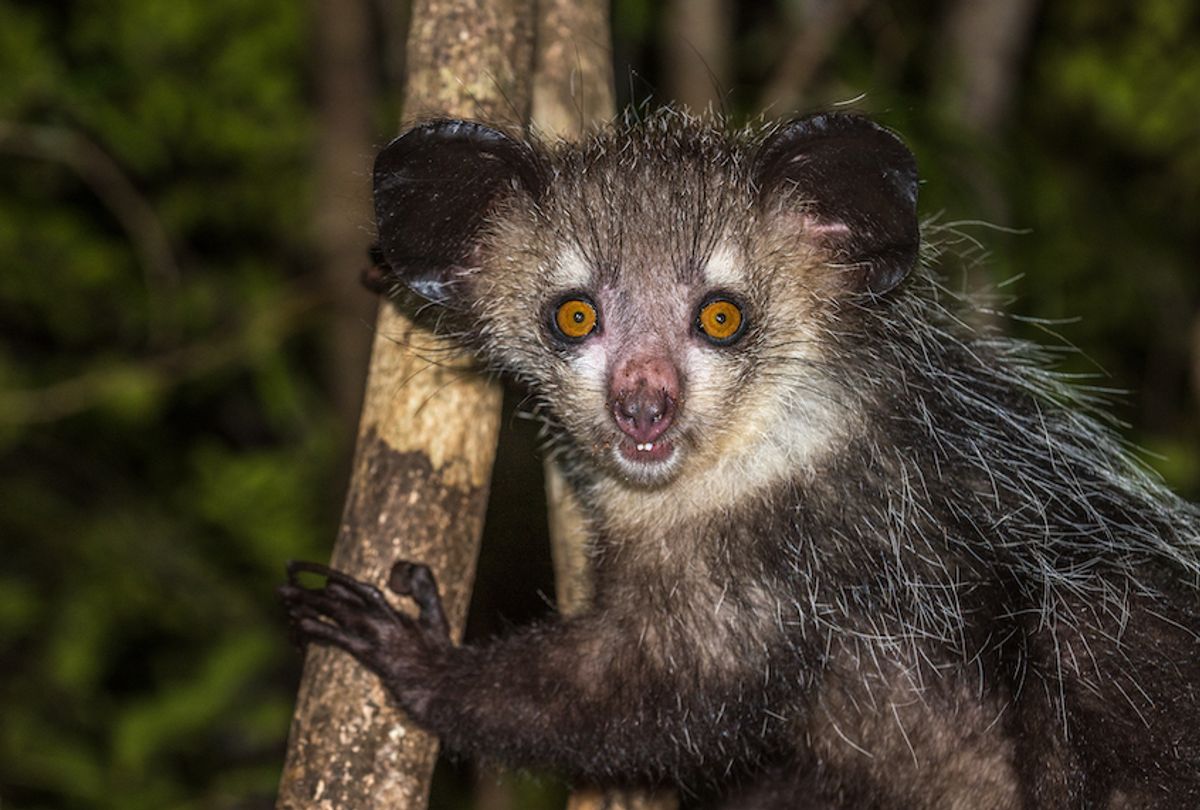 The aye-aye is one of nature's most fascinatingly bizarre creatures. Native to Madagascar, this lemur is the largest nocturnal primate in the world and has unique features that set it apart. It has bat‐like ears that allow it to echo-locate and rodent-like ever-growing incisors — both unique among primates.

It is most famous for its exceptionally long and skinny fingers. In fact, they are so long that the aye-aye's hand accounts for about 41% of the total length of the forelimb.

The animals also have highly specialised, extremely long third digits — middle fingers if you like — which they use to find food. They "tap" them against wood to generate acoustic reverberations that allow them to find wood‐boring larvae. These are then fished out with exceptional dexterity because the finger can swivel like a shoulder, and it is so thin that the animal habitually rests it on its even longer fourth finger for support.

My colleagues and I recently found yet another unique specialisation that sets the aye-aye apart from other primates: a sixth finger on each hand.

Previously undocumented, this tiny extra digit - called a "pseudothumb" - is a structure on each wrist made of bone and cartilage. We think that it may have evolved to help the lemur grip branches as it climbs through the trees and to help it grasp small objects, since its other fingers became so long and specialised.

In my studies of primates, I always wanted to examine the exceptional hand structure of aye-ayes and I was recently able to dissect some specimens to do so.

Little is known about the actual population size of aye-ayes, but they are hard to find and a large-scale loss of their habitat suggests population decline.

My colleagues and I dissected six adult and one immature specimen. Of course, no animals were sacrificed for the purposes of this study. Three specimens were captive‐raised, acquired from the Duke Lemur Centre in the US. Three were wild‐born adults housed in the collections of the Muséum National d'Histoire Naturelle, Paris. One was a wild‐born adult from Tsimbazaza Botanical and Zoological Park in Anatananarivo, Madagascar.

Dissections were performed to analyse the anatomy of the hand and wrist. A seventh specimen was used to create a digital reconstruction of these anatomical structures following MRI scanning and manual segmentation — a technique similar to a medical scan that allows the anatomy to be viewed in three-dimensions in a digital space.

Our discovery of the extra digit was pretty much accidental. As we traced the tendon of one of the forearm muscles down past the wrist and into the hand, it unexpectedly split into two directions and the smallest bit extended to a strange little structure near the thumb.

View of pseudothumb structures in (a) volume rendering of an MRI of the right hand of aye-aye (b) superficial and (c) deep dissections. Blue = tendon of palmaris longus.

When we examined the structure further, we noted a small bone and a cartilaginous extension that were moved in different directions by three different muscles. We realised the little structure was a "pseudothumb". It even had its own fingerprint!

All the aye‐aye specimens observed during the course of this study displayed this full suite of anatomical structures on each hand: it is not merely an anomaly, but is clearly a feature typical of the species.

Why the extra finger?

It's rather mysterious that no one had noticed the finger before, but this could be because it is mostly embedded in the fleshy part of the hand and therefore easy to miss. It could also be that the long fingers are so distracting that anatomists just never noticed this small structure.

My colleagues and I propose that there are three evolutionary scenarios for why the pseudothumb exists.

First, a pseudothumb may appear in species in which the thumb has become just another finger. That is what happened in the early bears: they lost the need for a thumb sticking toward the middle as this would just get in the way while the animal was walking.

Second, pseudodigits may emerge if the animal needs really broad hands for digging or swimming — as in the case of some moles.

Lastly, a pseudodigit may develop when the hand has become hyperspecialised and in which the evolution of a pseudothumb can facilitate greater manual dexterity. This scenario would appear to explain the presence of a pseudothumb within the aye‐aye.

We suggest that the tap foraging adaptations of the aye‐aye hand have resulted in the loss of grip dexterity, and so the pseudothumb can help to address this.