Will Wednesday's debate finally prove that Bloomberg is not Batman?

Bloomberg has portrayed himself as a billionaire savior in his ads, but the debate may expose his real personality 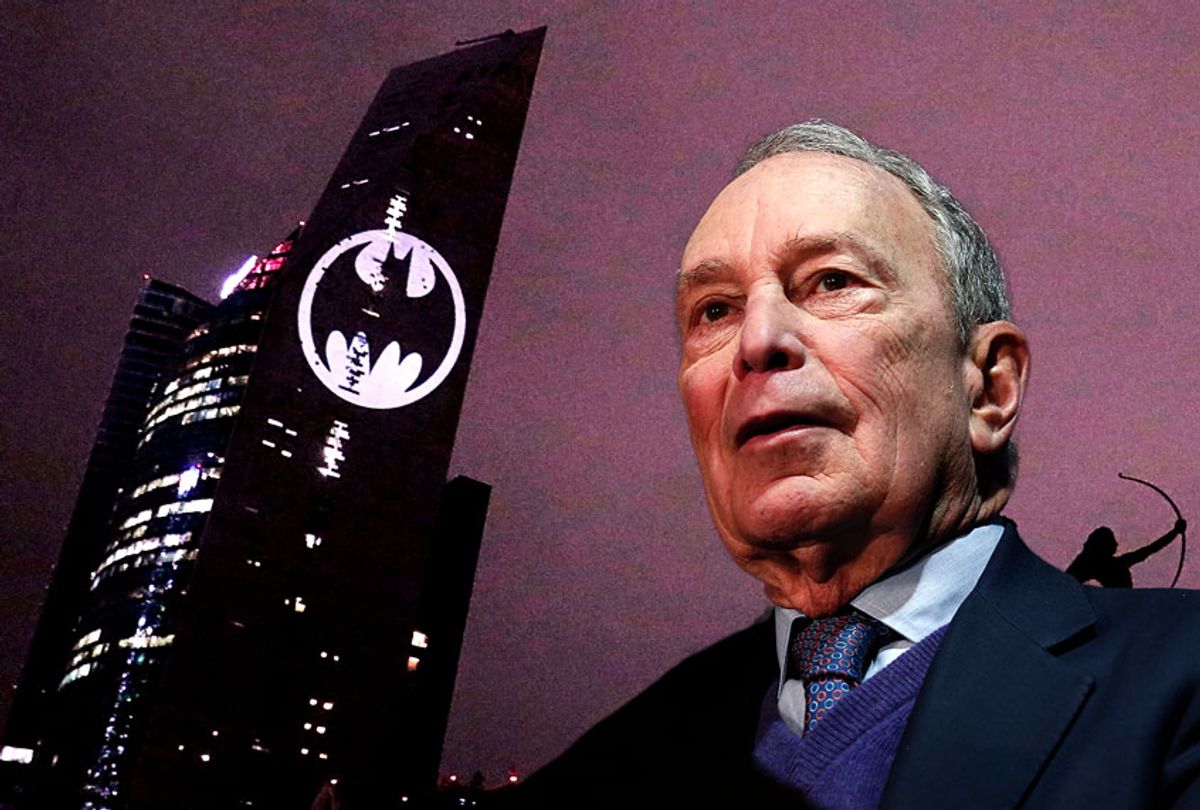 After months of highly repetitive Democratic primary debates that, with pointless inevitability, turn into tedious squabbles over different health care plans that will never actually be passed in their proposed forms, there's finally going to be some real tension going into a debate again. That's because information billionaire and former New York City mayor Mike Bloomberg is expected to show up tonight in Las Vegas, having purchased his way into the debate by infusing the airwaves and our very bloodstreams with a series of ads that are as inspiring as Bloomberg the man is not.

The ads have clearly been effective at convincing voters who don't know much about Bloomberg that the man is a cross between Jesus Christ and Beyoncé. He's skyrocketed to second in some polls despite not even bothering to show up in time to get on the ballot in early primary states, in a classic display of rich man arrogance. And I got a taste of it myself when I wrote a piece Tuesday arguing that Bloomberg wasn't electable and got drowned in defensive reactions from people who decided this dour and condescending man is somehow the savior here to deliver us from Donald Trump.

Speaking with a friend about this, he posited the theory that, because the power of billionaires is so hard to displace, people instead cling to fantasies of the benevolent billionaire come to save us all. Being a erudite man, he compared the situation to the frustration of the Russian revolutionaries, who found it difficult to convert Russian peasants convinced that if the tsar only knew of their pain, he would save them.

The problem, of course, is that Bloomberg is not being played by Christian Bale or Ben Affleck or even Michael Keaton. As someone who lived in New York City in the Bloomberg years, I can attest that he's smug and peevish and lacking in charisma. Most of his support is coming from his expensively edited ads that make him look mysterious and interesting, and most of the people who find the ads appealing aren't going online and watching actual videos of Bloomberg, for instance, being his usual charisma-free self while also demanding that the federal government focus on budget reduction by addressing "the issue of entitlements, Medicare, Medicaid, Social Security."

But at a debate, Bloomberg can't bring his team of editors on stage to use Hollywood trickery to hide his personality. (Tonight's debate, airing on NBC News and MSNBC, is scheduled to start at 9 p.m. Eastern.) Nor can he pay off his opponents, as he's paid off his endorsers, to refrain from attacking him on stage. Money can buy a lot, including the best debate prep team in the business, but it can't buy Bloomberg a personality or the humility he needs to actually listen to those debate preppers.

Is there a chance that Bloomberg presents to viewers tonight not the Batman figure of his ads, but a face more like that of a Batman villian? (The Penguin comes to mind.) Certainly, some of the other candidates in the race seem excited to have a real-life bad guy to bash on the stage.

Sen. Elizabeth Warren of Massachussetts, for instance, tweeted, "primary voters curious about how each candidate will take on Donald Trump can get a live demonstration of how we each take on an egomaniac billionaire."

Sen. Bernie Sanders of Vermont, with the circumspection of the poll leader, was a bit more muted, tweeting that while "Mr. Bloomberg has every right to run for president," he doesn't have "the right to buy this election."

There's also the long list of racist comments — some on video — and an eye-popping list of 40 lawsuits for sex discrimination and harassment that Bloomberg will hopefully have to answer for.

So while it's possible that Bloomberg has, with all his money, managed to shape himself into a contender, I'm guessing his ego and petulance will out under the pressure anyway.

The downside is that Bloomberg's presence will distort the debate significantly. With the priority being on kneecapping his attempts to buy the election, the more legitimate candidates will not be able to spend nearly as much time drawing distinctions between each other.

Sanders will largely benefit from this. He's been the front-runner and has mostly evaded direct criticism from other candidates and ducked more hard-hitting questions about how he plans to pass the broad array of social programs he's promised. (Instead, due to sexism, those questions have largely gone to Warren, who tanked in the polls because of it, while Sanders skated by.) With the focus on Bloomberg, Sanders will once again be able to keep pulling ahead without fear of much criticism or even the scrutiny that front-runners often get.

Still, for viewers, the situation will be exciting. By and large, Democratic debates have lacked villains, which means that the conflicts on stage are more demoralizing and upsetting than intriguing. But taking the metaphorical baseball bat to Bloomberg is a victimless crime. It may, dare I say, even be fun.