Like them or not, Elizabeth Warren and Amy Klobuchar represent the future of leadership

The electability of women presidential candidates is still being debated, but the world needs more women leaders 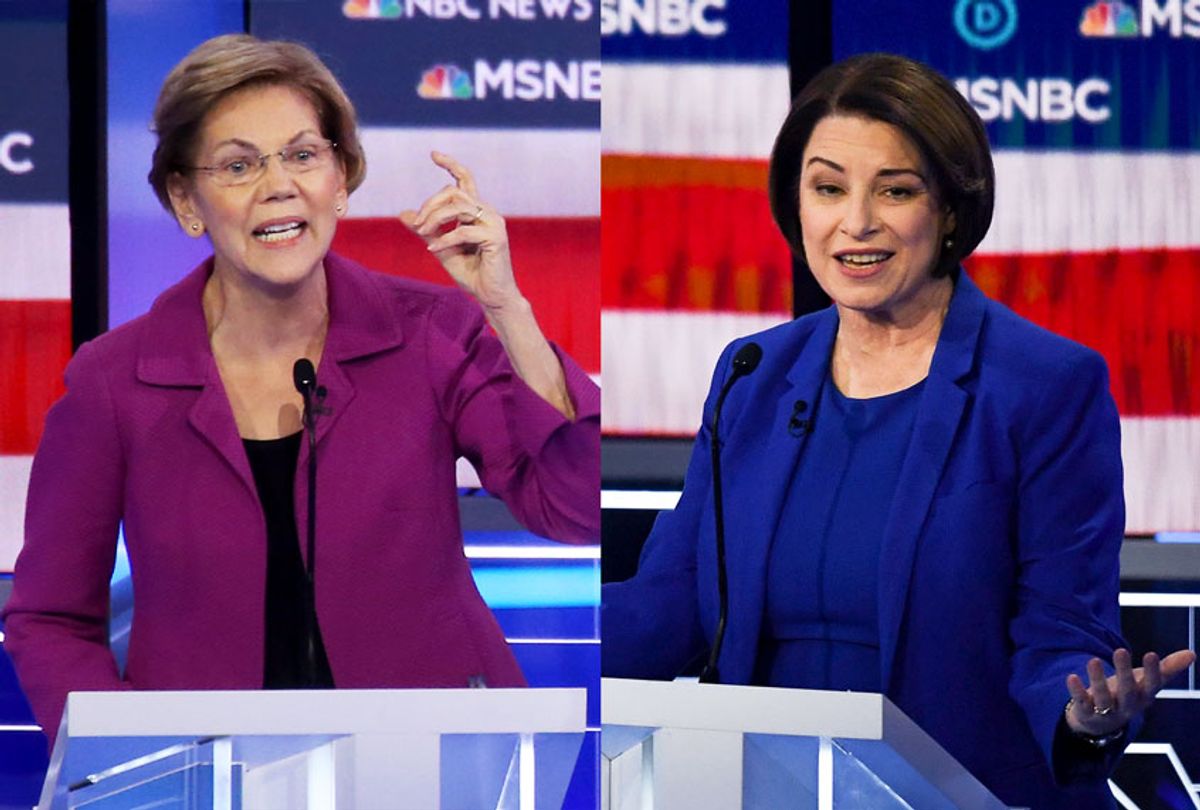 In Wednesday night's debate, the six remaining candidates' gloves came off and the all-important question of who can beat Donald Trump was front and center. But if you paid attention, there was another choice at stake: What does successful leadership looks like at the highest political level? And more importantly, what could it look like?

The mere presence of both Elizabeth Warren and Amy Klobuchar on the stage is a watershed moment, as the legitimacy and electability of women presidential candidates remains hotly contested.

Warren had a clear resurgence last night as she took on Michael Bloomberg unflinchingly, using her time to hold him accountable for his treatment of women in the workplace. But perhaps the most remarkable moment of the night came when Warren broke through the shouting to defend Klobuchar for a memory lapse. It's a glimpse of what could happen if we let women lead like women. While Warren and Klobuchar alike will inevitably receive criticism for being too pushy, shrill, or mean last night, it's time to question why we continue to hold women to the standard of masculine leadership—then punish them whether or not they meet it.

For decades, research has shown that both men and women describe the ideal leader as having masculine attributes like being assertive, arrogant, outspoken and dominant. This ideal is not only a white, middle class, heterosexual, able-bodied man (think Don Draper from "Mad Men"), it is also someone who is willing to engage in traditionally masculine behaviors — such as interrupting others, speaking first, displaying dominant behavior and aggressively pushing their agendas. But this isn't necessarily the most effective style of leadership — perhaps least so for an increasingly divided electorate.

We hold these preferences because we're more likely to value the contributions of men, particularly when it comes to assessing their competency for leadership positions, due to the fact that we simply don't associate women with power. As of 2017, there were 15 female world leaders, eight of whom are the first woman to occupy the seat — this represents fewer than 10% of 193 United Nation member states. Women leaders in politics are the exception, not the norm, which helps perpetuate our unconscious preference for the masculine ideal.

Women who do occupy leadership roles have to overcome numerous invisible barriers, not only to obtain their positions, but also to execute them. To succeed within the traditional paradigm, women must navigate a very narrow range of acceptable behaviors, as they adhere to a masculine leadership style but also try to manage people's comfort levels by conforming to gender expectations such as being nurturing, attractive and supportive. If women don't conform to gender expectations, they will be perceived as less likable and punished: a study examining the 2016 presidential race found that while Clinton matched the leadership ideal better than Trump, she was less likable because she lacked the required feminine traits. This standard is impossible to meet, which contributes to the reality that women leaders are more likely to be isolated, excluded, and devalued when they do rise to the tops of their fields.

It's time to name these invisible barriers so that we can begin to dismantle them—and open the door for more effective leadership styles. The outdated Don (and at present Donald) Draper leadership standard largely goes unquestioned, even as most men and women agree that it no longer serves us. A 2012 study found that both men and women rated women as more effective than men on the majority of leadership competences. When it comes to world leaders, research finds that women are better able to lead diverse countries and achieve economic growth when they do because they tend to lead with a more inclusive, participatory style — and their presence may itself mobilize economic inclusion among marginalized groups.

Despite operating in a system set up to ensure they don't succeed, women leaders do, which requires an inordinate amount of resilience, determination, and competency. Jacinda Ardern — the Prime Minister of New Zealand, who at the time of assuming office was just 37 years old and the world's youngest female head of government — has been globally recognized for her leadership effectiveness and compassion in handling of the 2019 terrorist attack in New Zealand. Other world leaders like Sanna Marin of Finland and Yulia Tymoshenko of Ukraine — who also assumed office when they were under 40 years of age — are not only transforming the political landscape in their own countries, but are incrementally resetting the global standard of leadership. Imagine what women could accomplish if the barriers to their leadership didn't exist.

Warren and Klobuchar are more than qualified to take up the position as America's next president. As we're casting our votes for the next Democratic presidential nominee, and judging the next president, let's pay attention to the role our outdated notions of what it takes to lead are playing in our decision-making. It's past time to reconsider what we really need from leaders in the White House, the board room, and beyond — and to make room for new models of leadership to thrive.

Michelle P. King is the Director of Inclusion at Netflix and the author of "The Fix: Overcome the Invisible Barriers That Are Holding Women Back at Work" (Atria; March 3, 2020).