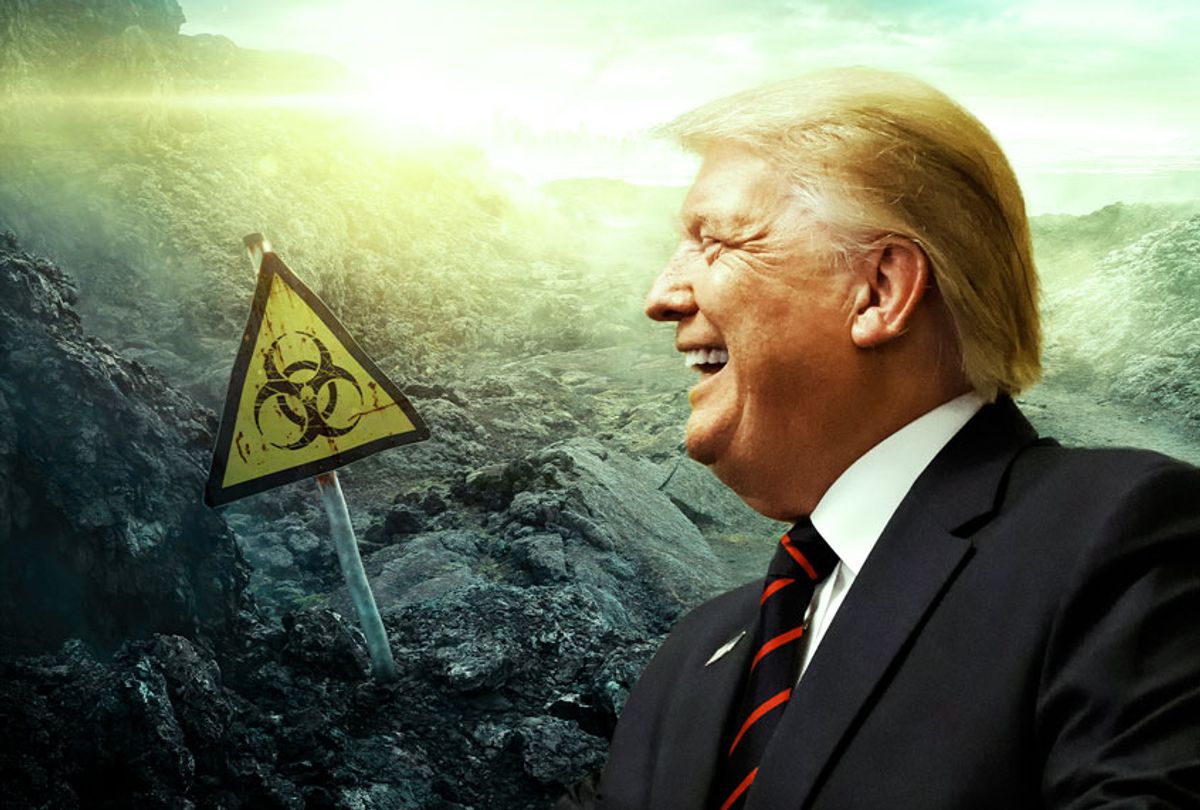 Here is a good, truth-in-advertising political slogan: "How much money will it bring in?" That is also the question that Alexis de Tocqueville argued Americans use to ascertain the "value of everything in this world."

The almighty profit motive reins so steadfastly supreme in the world's wealthiest nation that children suffer brain damage from drinking water contaminated with high levels of lead, prison has become the leading institution for the mentally ill, and hundreds of thousands of Americans declare bankruptcy every year because they can't afford to pay their medical bills. Caring for the sick and nurturing children cannot compete with the twin gods of enrichment and consumption in what historian Walter McDougall called "a nation of hustlers." In the words of President Calvin Coolidge, "The business of America is business."

Even if life, liberty and the pursuit of hucksterism always formed the core of American culture, there has also existed an alternative America. It is the America we can discern in the speeches of Martin Luther King, the songs of Woody Guthrie and the social movements that have pressured the government to move toward the actualization of "liberty and justice for all."

For almost all of American history, even the most cutthroat politicians acted as participants in a national masquerade, disguising their corporate servility with a cloak of sentimental rhetoric. Ronald Reagan likened America to a "shining city on a hill." George W. Bush promised to "restore integrity" to the country after Bill Clinton's sex scandal, and John McCain insisted that "character counts," even in the gladiatorial arena of political trickery, slander and brinkmanship.

It is only Donald Trump who has instructed Americans that civic virtue, concern for the public interest and personal ethics are, at best, delusions of the weak. One of Trump's more frightening political triumphs is that first as a candidate and then with the authority and influence of the presidency, he has exposed the idea of "American values" as a thin, easily penetrable veneer. What lies beneath that is exactly what Trump represents and advances with his every utterance and executive order – fidelity to the ancient maxim, "might makes right."

When Trump boasted that he forcefully gropes unsuspecting women by the genitals, he was not only displaying his misogyny, but also delineating an entire worldview. "When you're a star" — meaning when you have wealth and power — "you can do whatever you want." The pesky voice of conscience should forever remain on mute when there's money to make, deals to cut, and women to grab.

In only five years, Trump has enabled Republicans in Congress, in the media and in attendance at his pro wrestling-meets-Mussolini rallies to overcome what the late David Foster Wallace called, "the shame hobble." They not only accept Trump's behavior, no matter how vulgar or mean-spirited, they act as if morality does not even exist.

John McCain, according to Fox News commentators and right wing bloviators, did not really oppose Donald Trump, or have concerns about the elimination of protections for people suffering from pre-existing conditions in the Republican repeal of the Affordable Care Act. Rather, he was "weak" and riddled with envy over not having become president himself.

Similarly, Sen. Mitt Romney's invocation of his religious faith, his beliefs about the U.S. Constitution and his concern for the legacy he is leaving his children when explaining his vote to remove Trump from office was "phony." It was nothing more than cover for his own weakness and jealousy.

In order to support Trump, it is as if one has to assume that everyone is as petty, selfish and egocentric as Trump. The right wing exposes its own cynical views when conservatives delight in accusing progressives of "virtue-signaling." When the popular social media term originated, it referred to the real and irritating practice some people have of presenting themselves as saintly in their adherence to popular moral values. It no longer has any meaning, because the right has now bastardized it, applying it to anyone who expresses even the slightest concern for the downtrodden. The sad, Trump-like notion is that no activist, journalist or celebrity actually cares about families separated at the southern border, poor people who suffer for lack of social services, or endangered species. No one, in fact, cares about anything. They're all "virtue-signaling" to court favor with followers and customers.

Trump has taken advantage of his bully pulpit, along with his immense skills as a showman, to persuade many Americans that they should no longer even pretend to believe in values higher than profit maximization, victory against one's adversaries and the enhancement of one's social status. This is one reason many of his supporters are so rabid. He gives them comfort in the exercise of their base instincts, and offers them a reason to reject anything that might challenge them to improve.

The contenders for the Democratic nomination to the presidency disagree on the minutiae of health care policy, how best to combat climate change and how to manage the ongoing conflict between capital and social welfare in a large, industrial market economy. But despite these policy differences — none of which will matter if Republicans hold control of the Senate — they do all agree, at least in articulation, on the urgency of reviving the alternative America.

Joe Biden promises to "restore the soul of America," juxtaposing his potential presidency with footage of the Charlottesville hate crime and Trump's defense of its neo-Nazi participants. Pete Buttigieg refers to more than his relative youth when he boasts that he represents a "new generation of American leadership," and routinely recites words like "unity," "compassion" and "dignity."

Bernie Sanders, the current frontrunner, signals the alternative America most succinctly with his official campaign slogan, "Not Me. Us."

The problem is that America is a society constructed around the notion of an all-pervading self-interest, making the Democratic campaign, regardless of the candidate, more challenging than most observers would assume.

Cable news pundits, most especially the few sane Republicans who oppose Trump, often talk about how the president's policies and beliefs are "un-American." There is a major contradiction within that conclusion: Donald Trump is president of the United States of America. He also has a higher approval rating among Republicans than either of the Bushes or Ronald Reagan enjoyed at this stage of their respective presidencies. Before entering politics, Trump was an American icon — a fixture of tabloid television who, despite his repeated business failures, was seen as a marketing genius — a perception he would milk as host of the NBC program, "The Apprentice."

Democrats too often act as if it is a foregone conclusion that decency and civic-mindedness will prevail over Trump's malignant narcissism, and the antisocial ethos of power worship it represents.

The most crucial question of the 2020 race is whether or not virtue has any role left in political debate. Former New York mayor Mike Bloomberg seems to think it does not, and is counting on voters to overlook his record of racist policies and sexual harassment in the elevation of their own "might makes right" mentality. In this case, the might is a multibillion-dollar fortune, of which Bloomberg is willing to spend a chunk blitzing the American public with undeniably effective television advertisements.

For Trump's part, he will use his power to subvert the rule of law, undermine American agencies and institutions of government, and enact his "how much money will it bring in" agenda by cutting environmental protections, health and safety standards for workers and consumers, and funding for anything that implies a common good, from libraries to student loan forgiveness programs.

Those among us who still pledge some allegiance to the alternative America can watch in horror as we inch closer to the realization that Donald Trump, the personification of kitsch, ignorance and barbarism, is not un-American at all. He is as American as fireworks on the Fourth of July.